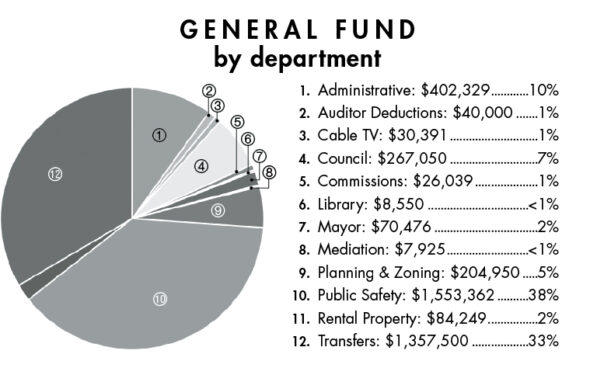 A recent memo sent to Village Council members by Finance Director Matt Dillon lays out a 2022 budget scenario in which current revenue projections “do not support the Village’s current projections for [the 2022 fiscal year] general fund expenses.”

The 2022 projected revenue shortfall highlighted by Dillon’s letter, and the public safety line item emerged as top concerns for some Village Council members at a special budget session held on Oct. 11 via Zoom — the first of three meetings focused on the Village’s 2022 budget.

The intention of the first meeting was to “power through a lot of the high-level detail within the budget,” said Dillon, who presented the document to Council.

This is the second year in which revenue projections will fall short, Dillon pointed out in the memo.

The 2021 fiscal year budget will overrun general fund revenue by $1 million, leaving $1.5 million in the reserve balance in January of 2022 — a one-year reduction impact of 40% to the reserve.
Dillon surmised that current spending levels were not sustainable and that the Village would need to resolve the issue by bringing in more revenue, reducing service levels or both.

Council member Lisa Kreeger said that using multiple strategies to address the budget shortfall resonated with her. She also emphasized a need for the Village to deal with the long-neglected issue of decaying infrastructure, believing that the budget is a reflection of Village values.

“We need to spend the money so these streets don’t collapse with these sinkholes,” Kreeger said.
Council member Laura Curliss said she would also feel more comfortable with a year’s worth of reserves in the general fund.

“It would give you two election cycles if the voters asked you to try harder to ­convince them the Village needs the reserves,” she explained.

Kreeger said one of the areas on which she wants to focus is the public safety budget, a view shared by Council member Marianne MacQueen.

“I will be looking forward to a really deep dive on the police budget, because it is by far a huge element of the budget,” Kreeger said.

MacQueen added: “I do believe we need to look at the police department in terms of expenses.”
The public safety budget comprises $1,553,362, or 38%, of the general fund budget, Dillon told Council.

The next scheduled budget meeting on Friday, Oct. 22, will focus on general and internal special revenue funds, and a third meeting on Thursday, Nov. 11, will spotlight enterprising capital. The News will provide updates on the budget in future articles.