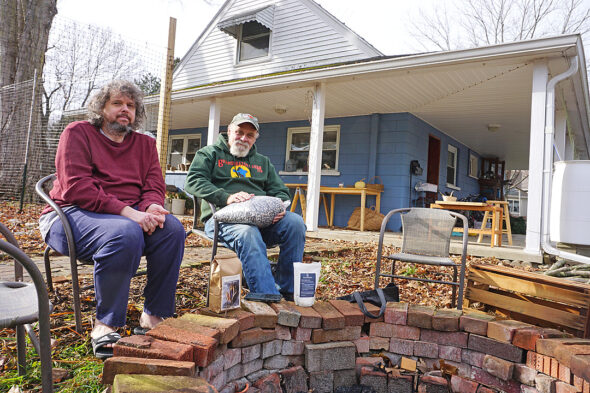 There’s a special kind of alchemy that goes into bread: grain and water and heat and time, among other things, are components of a spell that materializes into nourishment.

Baker James Luckett and farmer Jon Branstrator recently sat outside Luckett’s home and bakery, which he calls the Blue House, where Luckett performs this spell for hungry villagers on a regular basis. The two discussed the ways they’ve wielded these components, some of them thousands of years old, for a new bread variety they’ve cooked up together.

Branstrator grows heritage grain just a half-hour down the road in Clarksville on his fifth-generation family farm, and supplies Luckett with much of the whole wheat he uses in making his bread. Luckett said working with a local farmer to obtain fresh grain, which he can then mill himself, is key to creating his full-bodied loaves.

“I started making the bread with the intention of wanting to make the tastiest and healthiest bread that I could, and I wanted to find high-quality whole grains,” he said. “In some parts of the country, they have this kind of grain economy going, and there’s farmers and millers and bakers — but here there isn’t really anything like that. So meeting Jon, who has this whole field of wheat, I thought, ‘Wow, OK, yes. I want that.’”

Branstrator said his wheat, a heritage variety called Red Fife, is hardier than most grain in the area, and is more suitable to the robust loaves that Luckett produces.

“[Red Fife] is made for sourdough breads — the other wheat that’s grown around here is a soft, red wheat that is milled into white flour and used for like pastries and Little Debbies and Hohos,” he said. “Which has its place, but it’s not the kind of wheat that I find interesting.”

Branstrator also farms heritage corn — a grain with which he’s developed something of a love affair.

“I love learning and teaching about corn,” he said.

He’s spent the last several winters learning about corn in Mexico, where it was developed thousands of years ago. In particular, he learned the process of nixtamalization, in which dried corn kernels are soaked in a solution of water and calcium hydroxide — a process that ultimately rids the grain of any potential fungal growth and makes it more nutritious.

“[Nixtamalization] makes the corn taste different, it makes niacin and other minerals more bioavailable to our bodies, and when you grind it, it has a cohesiveness,” Branstrator said.

Nixtamalization was pioneered by the same Indigenous peoples in Mesoamerica who developed corn from wild grasses. Branstrator said that, when Europeans took corn from the Americas, they often did not take the process of nixtamalization with them.

“In a lot of places where people were food insecure, they just basically ate a corn porridge every day and they developed diseases and nutritional deficiencies,” Branstrator said. “So [nixtamalization] is just a way to complete the nutritional circle.”

With all of that in mind, the process of nixtamalization ended up being what Luckett was looking for when he decided to try a new loaf that incorporated milled corn. Branstrator produces a non-nixtamalized cornmeal from Blue Clarage, a heritage corn variety developed in Ohio in the early 20th century, that Luckett originally tried to incorporate into his bread.

“The [ground corn] is a little too fine, so when I mix it into the bread, it just kind of gets lost in the dough — you get the corn flavor, but you don’t have any texture from the corn,” he said.

So he and Branstrator put their heads together. Just after this year’s Blue Clarage crop was harvested in early December, Branstrator suggested Luckett grind up some of the kernels that Branstrator had nixtamalized and use that in place of the traditional cornmeal. Not only would this produce the kind of texture Luckett was looking for, but it also would create a distinct flavor.

The resulting product was an experimental blue nixtamal sourdough, the first batch of which Luckett baked for the first time last week.

“It’s a win-win — better texture and a different flavor than what we’re used to experiencing,” Luckett said.

Branstrator added: “And it’s really a much healthier product — and it was nice to have a co-conspirator who was willing to try something new.”

Luckett said that, unlike a traditional commercial bakery where customers might expect consistency in every loaf, he has the freedom to experiment with something like the nixtamal sourdough and see what shakes out.

“I don’t think my customers have that same expectation,” Luckett said. “One week I might say,

‘Wow, I put way too much corn in there,’ or ‘I didn’t quite like how that was handled,’ and it might still be really good bread. It’s just always kind of evolving and changing — I always say that the Blue House is a work in progress.”

For more information on Luckett’s bread, visit bluehousebread.com. For more on Branstrator Farm, visit branstratorfarm.com. Branstrator is also featured in the most recent episode of Agraria’s “Grounded Hope” podcast, “The Stories in Seeds,” at groundedhope.org.