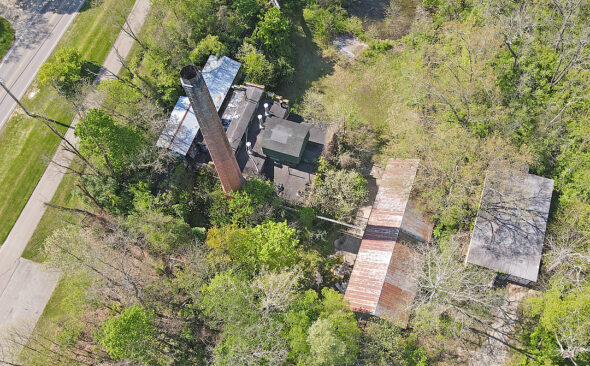 An aerial view of the former Antioch College power plant, taken last spring. The structure, which is considered an ecological hazard, is slated for demolition this year. (Photo by Bryan Cady)

The old Antioch College power plant, which is considered a public and ecological hazard that releases dangerous materials into the Glen, will soon be demolished and the land rehabbed into wetlands, thanks in part to a $988,119 grant from the Clean Ohio Conservation Fund.

The grant was awarded to the Glen Helen Association, which took ownership in 2020. The Village of Yellow Springs has also committed $125,000 in matching funds to the demolition project. The estimated cost of the demolition, cleanup and site restoration is $500,000.

Visitors to the Glen will also experience an elevated view of the ever-evolving beaver dam with planned improvements to existing bridges and boardwalks throughout the preserve that will enhance public access to 15 miles of trails. Also included on the Glen’s list of planned enhancements:

• Upgrades to existing parking areas with gates, lighting and trash/recycling containers; and the addition of a new parking area to improve access and accessibility.

• Wayfinding and protective signage at trail intersections and trailheads.

• Installation of perimeter fencing behind downtown businesses that “will better direct the public onto the trail system and discourage unauthorized activity.”

• Demolition of the Jacoby Road Gatehouse, a derelict house located near wetlands above the Little Miami River.

“It’s wonderful news for us,” said Glen Helen Association Executive Director Nick Boutis. “I am pretty sure that this is the largest operating fund grant that Glen Helen has ever been the beneficiary of.”

The site improvement grant is a collaboration between the Tecumseh Land Trust and the Glen Helen Association and will be used to make critical safety and habitat restoration improvements to the 1,125-acre nature preserve. The grant proposal was submitted by the Tecumseh Land Trust on behalf of the Glen Helen Association in the fall of 2021 and was overwhelmingly supported by the Clean Ohio Natural Resources Assistance Council.

“Tecumseh Land Trust holds the easements on the Glen, so they were deemed to be eligible to apply for funds for the Glen, whereas the public works commission wasn’t able to consider a grant directly from the Glen Helen Association,” Boutis said.

“We see our role in this project as providing oversight,” said Tecumseh Land Trust Executive Director Michele Burns via phone. “It is important for people to understand that the land trust works to preserve land forever, and we are hoping to be in partnership with anyone in this effort.”

The Clean Ohio Conservation Fund is a granting agency that reimburses organizations for work that must be finished in two years, and Boutis said completing all the projects on the list in that time period will be a heavy lift.

“It is not a grant in which you start the work during the two years and there is overhang,” he said.
While completing the projects in two years may be challenging and more support is needed, Boutis said the grant better positions the Glen to make much-needed improvements.

“This grant is significant for us,” he said. “It won’t do everything we want it to do in the preserve; there will be ongoing work and additional support that we’ll need to bring in, but this grant positions us to be in much better shape than we anticipated when we took ‘the keys to the trees’ back in 2020.”

Boutis added that, in addition to the nearly seven-figure grant, individual donations from Glen supporters have helped the nature preserve thrive.

“This is a big grant for us, but most of the funds that we’ve raised to make this initial suite of improvements have come from individual donors,” he said. “I expect that will continue to be the case, and that’s the reason we feel as confident about the future of the preserve and the programs that we do.” 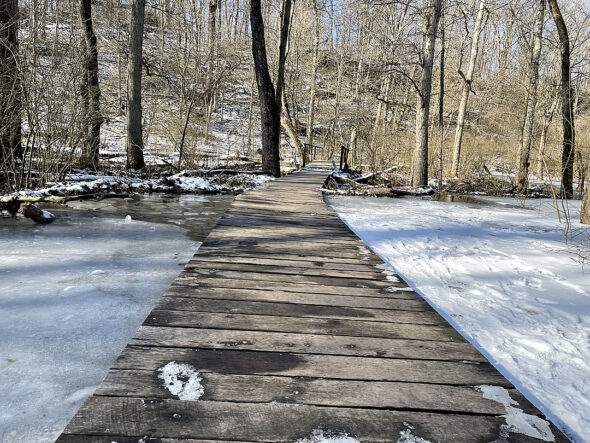 The Glen Helen beavers continue to perfect their dam-building technique along the Yellow Springs Creek. At the foot of the stone steps leading into the Inman Trail is a recently built boardwalk that, due to the critters’ work, now needs to be raised; that upgrade is slated to begin before the spring thaw. (Photo by Cheryl Durgans)

Demolishing the old Antioch power plant is at the top of the list of projects.

“One of the things that we want to dive into as soon as possible is getting the process going for the demolishing the old Antioch College power plant and doing the land restoration for that, but we’ve got work to do in terms of putting that project out for bid and hopefully seeing that project done later this year,” Boutis said.

Improving access by repairing and replacing existing bridges and boardwalks will continue throughout the two-year process.

“We have work to do across the preserve,” he said. “Existing bridges that just need some TLC, existing bridges that need to be replaced, and then we’ve all experienced places in the Glen where you’ve been walking and you think, ‘It would be nice if they have something here.’”

Boutis said he hopes that the Glen will begin working on the project before spring, in part because of a volunteer and engineer who reviewed the project plans, making sure they were viable.

“As soon as we get our ducks in a row and figure out who’s going to do the work and how much it’s going to cost, we’re gearing up to that, otherwise somebody may get their feet cold and wet,” he said.

The Glen plans to minimize the anticipated work’s impact on visitors over the next two years, but there may be some temporary disruptions according to Boutis.

“It may feel like your trip to see family on the Ohio turnpike — ‘Why is it every year this is under construction?’” Boutis said. “There will be periods where individual trail segments will need to be closed off. There probably won’t be long closure periods on any trail, but it’s reasonable to anticipate that over this period folks on a trail get to a sign that says the trail is closed.”

The Glen plans to notify the public in advance of any closures by putting updates on the organization’s Facebook page and on its website.

Parking is another area of anticipated improvement — the Glen has submitted a proposal for consideration of funds from the state capital budget for accessibility improvements, according to Boutis. The funds will allow the Glen to build a designated trail that is compliant with the Americans with Disabilities Act, or ADA. The planned trail would be located in the north Glen and lead to the Yellow Springs and the Birch Creek Cascades.

“Those [funds] … will make sure that the improvements that we intend to do for access to parking areas will take us all the way across the finish line in terms of the accessibility improvements that we want to do,” Boutis said. “We are trying to make it easier for folks across the mobility spectrum who want to visit the Glen. … [If] folks are wheelchair riders, we want to make sure that they can experience nature, and for folks who have small kids that aren’t able to tackle steep slopes, we want them to feel welcome here.”

The Glen has also factored in access for older Glen visitors into the accessibility plans.

“I can’t tell you the number of folks who tell me, ‘You know, I’ve been hiking the Glen for 50 years and I can’t go down the trailside steps anymore. I wish there was a way for me to continue to connect with the place,’” Boutis said.

Replacing existing fencing along the bike trail is another priority of the GHA.

“One of the wonderful things we have is the proximity of the Glen to downtown Yellow Springs, and the ability to walk into the preserve from downtown [along the bike path] … but one of the challenges … is that area becomes a vector for litter, and for people coming in outside of our trail system,” Boutis said.

The Glen plans to replace the older crushed chain link fence and to improve it aesthetically “with something that looks nicer and guides people to our established trail system,” he said.
Boutis said that the Glen is also in conversation with Max Crome, architect for Dave Chappelle’s planned comedy club and restaurant, to be located on Corry Street adjacent to the bike path bordering the Glen. According to Boutis, Crome is aware of the Glen’s concern about litter and unauthorized Glen access.

“They share our concerns and interests. We want to find ways to be good neighbors to each other,” he said.

4 Responses to “Nearly $1M in improvements slated for Glen Helen”