Transgender people globally continue to face discrimination on a daily basis. In the United States, legislation restricting trans rights is being enacted by states across the country, and the trans community remains particularly vulnerable to intolerance, acts of hate and violence.

In spite of these challenges, the message relayed through the village’s first Transgender Day of Visibility Celebration, or TDOV, held at the Coretta Scott King Center on Antioch’s campus on March 31 was clear: There is love and support for transgender people here in Yellow Springs. The event was hosted by Yellow Springs Pride, the Inclusive Resilient Yellow Springs Coalition and Antioch College.

“Yellow Springs is known for its historic inclusiveness and continues to grow in that effort,” said Yellow Springs Pride president Phillip O’Rourke, who was one of the event hosts.

“I’m here, I see you, I love you,” said resident Chasilee Crawford, who attended on behalf of her 19-year-old daughter, Zay, and in support of trans people. Crawford also relayed a message to the audience from Zay, who could not attend the event because of work.

Antioch President Jane Fernandes was in attendance and welcomed the community to the campus. Mayor Pam Conine, who could not attend the event in person, formalized the Village’s support of TDOV through a written proclamation read to the attendees by O’Rourke in her stead.

“Whereas we let it be known that the diverse Village of Yellow Springs is proud to stand in support of all LGBTQ+ plus sisters and brothers … by virtue of the authority vested in me as Mayor of Yellow Springs, Ohio, do hereby proclaim today, March 31, 2022, to be TDOV in the village,” she wrote.

TDOV was the first in-person event held at the Coretta Scott King Center for Cultural and Intellectual Freedom since the COVID-19 pandemic began in 2020, according to director Shadia Alvarez.

World TDOV has its origins in Michigan. The brain child of trans advocate Rachel Crandall, the celebration began in 2010 as a response “to the overwhelming majority of media stories about transgender people [being the focus of] violence,” according to the Gay & Lesbian Alliance Against Defamation, or GLAAD, website. Instead, TDOV is a celebration of transgender lives.
Members of the trans community, including Angel Walt, were on hand to speak on their experiences at the local celebration.

“They [TDOV] were the ones that gave me the courage and inspiration to say this is who I am to the rest of the world,” Walt told those assembled. “2011 is when I came out to the world as a transgender woman and I decided to take myself and go back into the office.”

Walt then described her coming out experience. She was employed at that time with the Department of Defense in Maryland. 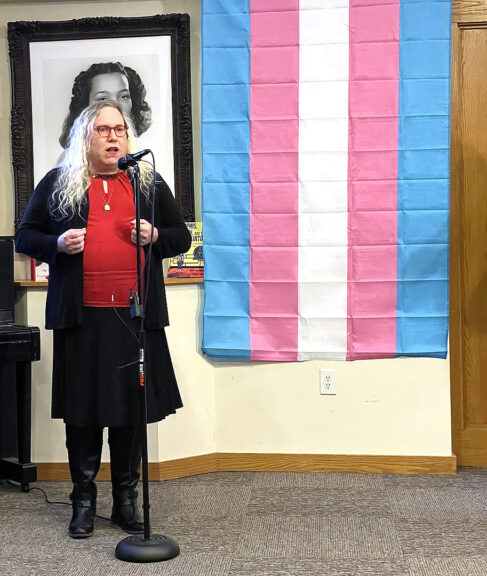 Angel Walt was a featured speaker at the Yellow Springs Transgender Day of Visibility celebration on Thursday, March 31. (Photo by Cheryl Durgans)

“I walk down the aisle at work and I hear somebody having a conversation, and they’d stop as I walk by,” she said. “Every now and then I’d hear somebody go, ‘What the [expletive]!’ I was the only trans person that they’d ever known in their life.”

Walt said at first she was treated like a sideshow.

“The visibility of being there everyday was first a sideshow attraction to them, but then, as they got to know me, realized I was just another worker like them, and the familiarity began,” she said.

Walt also said that her co-workers’ comfort with her became important when anti-trans legislation was gaining momentum through petitions. Her co-workers, used to being around her by then, balked at supporting the anti-trans proposals.

Another speaker, Luminialys Kit Rhodes, spoke about attempting to come out as a transgender woman about 20 years ago, saying that she “paid for it dearly.”

“Ideally, I wouldn’t want anyone to suffer as I did,” Rhodes said in a quiet voice. “We deserve to be seen, we deserve to be known. … We are all worthy, we are all enough.”

Local resident Iden Crockett also spoke, saying she’s had the opportunity to tell her story through her writing and art over the past year. She added that, while she expects TDOV to occur in Yellow Springs, the village is just a small part of the world.

She also emphasized the need for people to fight back against ignorance.

“I wanted to take this chance today, while we are all being visible, to talk about how important it is, not just to inspire the other trans people out there who are scared to be visible to come out, but to fight against ignorance. I think the only way you can do that is by telling the truth, and the only truth that you know is your own,” she said.

The keynote address was given remotely by Antioch board of trustees Chair Shelby Chestnut, who was headed to Texas to mobilize against anti-trans legislation recently signed into law by Republican governor Greg Abbott. That legislation, in part, limits medical support for youth who identify as transgender. Chestnut is the director of policy and programs at the Transgender Law Center (TLC) and, according to Antioch’s website, her work “focuses on supporting the leadership of transgender people of color” in the United States.

Chestnut said that children are now being targeted by anti-trans legislation across the country.

“I believe when they realized they couldn’t continue to target adults, they’ve gone for young people and now young people and their parents,” Chestnut said. “Trans kids are disproportionately impacted by family rejection and bullying in schools, and now the people who are hopefully protecting them are potentially criminalized for supporting them as transgender people.”

TDOV was the first program for Yellow Springs Pride Fest outside of the annual Pride Fest held in the village. Bob Partida, one of the founders of Pride Fest, said that the expansion is much-needed.

“We’re transitioning. It’s been a wonderful 11 years of us doing the Pride Fest and really providing great safe community space,” Partida said, and added that Pride Fest’s work would continue to expand throughout the year.

“The need is incredible, so we are going to become a year-round resource to provide for this community,” he said. “It is so important that we continue working together, and coming together and talking to each other.”