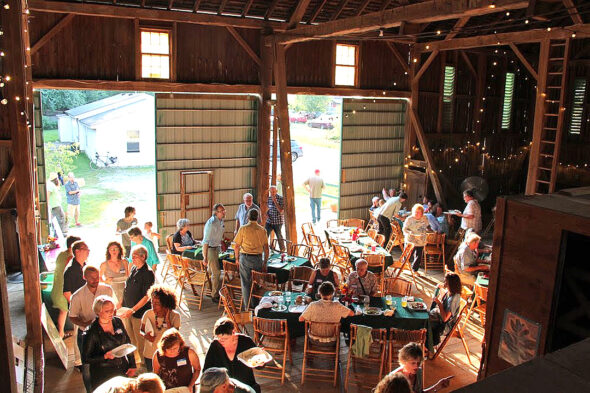 The Agraria Center for Regenerative Practice will debut a new event that aims to bond folks not only with the land, but also each other. (Submitted photo by Dennie Eagleson)

In the five years since the purchase of the land that would become its working farm, the Agraria Center for Regenerative Practice has rolled out an ever-expanding slate of workshops, skillshares and conferences focused on connecting the community with the land. This month, Agraria will debut a new event that aims to bond folks not only with the land, but also with one another, hopefully for years to come.

The center’s first Dogwood Festival is slated for Saturday, May 28, 2–10 p.m., at the Agraria Farm. The event, which organizers plan to make annual, will feature activities throughout the afternoon and into the evening, including tours, a scavenger hunt, lawn games, music, a bonfire, a barn dance and more.

“We’re thinking of it as the spring celebration event,” she said.

Wolford added that the festival, which is a fundraiser for Agraria, is open to people of any age.
“The events are really for the whole family,” she said. “We want to have a festival atmosphere and make it a special treat for people to look forward to every year.”

In service of the desired atmosphere, the Dogwood Festival will feature “party hosts” on its shuttle buses, who will aim to invigorate festival-goers as they head to the Agraria grounds.

The schedule will be split into two segments. Scheduled daytime programming includes a seed and gardening station; a children’s building station, where young festival attendees can learn how to use basic hand tools; an all-ages natural dye and stamp station, where participants can make their own textile art; guided tours; and the Dogwood Kid’s Village play area, which will be open until dark.

In the evening, the fun will move into the Agraria barn with a family barn dance featuring live music from local musicians ​​Linda Scutt, Mary Beth Burkholder and Mark DeLozier, with dances called by Carol Kopp. Following the barn dance, music will be provided by DJ Domino.

Outside the barn, a bonfire will light up the Agraria grounds as a small-group sensory walk is led around the property. FlyBy BBQ will have a food truck on-site and a cash bar, with beer from YS Brewery, wine and various nonalcoholic beverages, will be open throughout the evening.

A raffle, featuring prizes donated by local businesses, will round out the evening.

The Dogwood Festival comes after two years of Agraria’s adjustment to the ongoing pandemic. As has been the case with any institution making its way through a world-changing event, that adjustment has included its share of challenges, Bongorno said — but Agraria has also seen some benefits.

“The programs are growing — we’ve gotten a lot of interest,” she said.

With some of its programming, like its annual Black Farming and Pathways to Regeneration conferences, hosted either partially or completely online, Bongorno said Agraria was able to stay connected to the local community — and reach new communities.

“Moving a lot of programming online actually expanded our reach,” she said.
At the same time, Agraria’s focus on outdoor programming made it possible for the community — particularly its youngest members — to stay connected in person.

That expansion, Wolford added, meant that Agraria felt confident when beginning to plan the Dogwood Festival.

“We’re establishing a track record,” she said. “There are lots of different kinds of entertainment available … but Agraria brings people the opportunity to get back to the outdoors.”

All in all, Bongorno said, the support Agraria has received has enabled the Dogwood Festival to become a reality — and she hopes the festival will prove itself as reciprocation for that support.

“I see Agraria as playing a role of bringing people together, and I think [the festival] is sort of a culmination of that energy,” she said. “We love our community, which has supported us … over the past couple of years, and we want to invite them out to dance with us in our barn.”

Tickets for the first Dogwood Festival are $5 for daytime activities, with kids 5 and under free; and $25 for evening activities for adults, $15 for students ages 13 and older and adults ages 65 and older; with kids 12 and under admitted free. For a full schedule of events, and to register, visit bit.ly/39zPwoI.

Volunteers are needed for the festival, for shifts of between two and three hours, for parking, party hosting and selling raffle tickets. Volunteers will receive complimentary tickets to the day’s events.