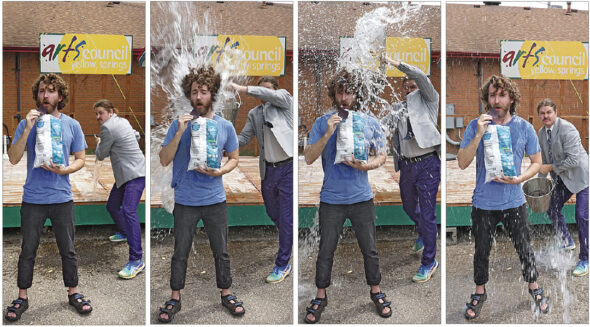 What do you get when you cross over-the-top, feverish sketch comedy with live music?

A veritable tour-de-farce, of course.

A better punchline is there, to be sure, but you’ll have to hear it for yourself at the Yellow Springs Arts Council building, straight from two local jokesters in their upcoming comedy shows.

While the performances are free and open to the public, Cromer and Zaremsky cautioned younger audiences from attending; they labeled their comedy as PG-13.

Clocking in at under an hour, the duo’s shows are composed of seven original and distinct sketches, six of which were written by Cromer, and one by his mother, Carol Allin.

In composing the sketches, Cromer said he tends toward the absurd. For him, writing sketch comedy affords him — and anyone else willing to participate in or pay witness to his antics — the opportunity to depart from the mundane.

“I’ll freely admit to being an escapist,” he said. “It’s healthy to be able to safely leave the world behind and play make-believe for a little bit. That’s why we turn on the TV and watch our soaps.”

Without wanting to spoil the show, Cromer and Zaremsky said their sketches range markedly in theme and content. That means different scenarios, different characters and, as the pair said, different ways to be dumb. The throughline between each bit, however, is the lunacy.

“So, we’ll take [the audience] to the doctor’s office … just to make sure everybody’s healthy,” Cromer said.

“Or maybe [the audience] is feeling nervous about that upcoming audition they have for that big movie coming out,” Zaremsky added mischievously.

Musically backing the two comedians during their performance are the “internationally renowned” Boogie Brothers, a three-piece band of dubious origin, according to Cromer and Zaremsky.

With a wink, Cromer said he and his partner-in-comedy met the musical trio several years ago at a seedy “gin joint” in New Orleans. You wouldn’t — or perhaps, shouldn’t — believe the circumstances.

Cromer was “soused” on gin, and Zaremsky — supposedly stone-cold sober — was elsewhere in the run-down saloon, “fleecing people for money” in rip-roaring games of Bananagrams.

The inevitable occurred: Zaremsky quickly found himself in a classic bar fight. The violence made its way to the stage where, as luck would have it, The Boogie Brothers had already taken a liking to Zaremsky and jumped to his defense.

The relationship was then set in stone. Now, the Boogie Brothers — who, somehow, aren’t related — occasionally come up to Yellow Springs to perform with Cromer and Zaremsky. At the upcoming series of shows, the band will provide the comedians with transition music between scenes, as well as original tunes before and after each performance.

“We’re very lucky to have [The Boogie Brothers] with us,” Cromer said. “And it’s such a coincidence that they have such uncanny doppelgängers living here in town. They look exactly like Nathanial Reed [on keys], Eric Rudolf [on guitar] and Isaac Haller [on drums].”

Both Cromer and Zaremsky said they’re looking forward to making people laugh in real-time, again. While the pair has performed many times in and around Yellow Springs throughout their lives, this is their first live performance since the COVID-19 outbreak.

“How can we not laugh at a time like this,” Zaremsky said. “When faced with such extreme circumstances, it can be so easy to get bogged down and drained. Comedy boils, I mean, buoys the spirit.”