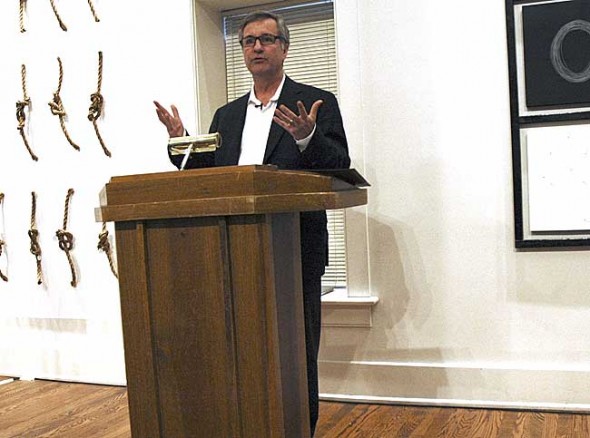 Last Friday Antioch College President Mark Roosevelt gave the State of the College address to an audience of about 50 Antioch and Yellow Springs community members. The event was the beginning of a weekend-long meeting of the college’s board. (Photo by Diane Chiddister)

State of the College: ‘You have a college that’s yours again’

In his State of the College address Friday night, Antioch College President Mark Roosevelt articulated a new vision for Antioch as a college that will focus on addressing the challenges of sustainability. The May 20 talk, which was open to the community and held in Herndon Gallery, launched the weekend meeting of the college’s pro tem board.

“The way we live in America today is not sustainable. Period. The evidence for this is overwhelming and mounting every day,” Roosevelt said to an audience of about 50 college and village community members. “Our unwillingness to deal with this threatens every single aspect of life as we know it.”

Providing students with a multi-disciplinary program to meet this challenge will prepare them for a wide range of careers, Roosevelt said.

“I believe Antioch College can become a place where the faculty, students and community are working together to find better ways of living,” he said.

Roosevelt also emphasized the need for the college and the Yellow Springs community to join forces, both for practical reasons and because students benefit from being rooted in a community.

“This village lends itself to this being a community college,” he said, using the term not as most frequently used but as “a college in which young people are deeply integrated into the community.”

The loss of community has contributed to a lack of centeredness in not only American culture but the culture of many college campuses, Roosevelt said.

“People are searching for that kind of life,” he said, stating that while some may consider him overly idealistic, “If reading Arthur Morgan has taught me anything, it’s that it’s better to be super idealistic and go for it, than not.”

Regarding the issue of environmental sustainability, Roosevelt described himself as having “dramatically changed” in the four months since he came to campus as college president.

“I was woefully, inadequately knowledgeable about what has happened and what we need to do,” Roosevelt said.

Citing a speech by Bennington College President Elizabeth Coleman as an inspiration, Roosevelt stated that Coleman’s basic message is that “America is in significant and serious decline, and academic institutions are on the sidelines and doing nothing about it. It’s an amazing disconnect.”

The most pressing issues of environmental sustainability involve food and water, Roosevelt said, citing statistics that out of 6 billion humans alive today, 1 billion are hungry, another billion are on the brink of hunger and a billion are obese. In this country, there’s been a 300 percent rise in obesity in the past 20 years, Roosevelt said, stating that while lack of exercise contributes to that significant health problem, the largest contributor is the way food is produced and processed.

“We had to step back and look at, what is Antioch? Where is Antioch? We’re in the breadbasket, surrounded by people who are doing interesting things with food,” Roosevelt said, stating that regarding the importance of food to a host of environmental issues, “Kids get it. They get it and know it. They feel it and want to live it.”

At Antioch College, students will “live it,” he said, stating that talks are underway regarding creating a farm on the campus “golf course.” All students will be required to work 10 hours weekly on campus, and many of the first term’s co-op jobs will be on campus as well, giving students the opportunity to be involved in food production.

While specifics about the farm haven’t been ironed out, “We want it to be beautiful and meaningful, to the village as well as the college,” Roosevelt said. “If we do it, we have to do it well.”

Because the new college faculty is small, the approach to sustainability is necessarily multi-disciplinary, Roosevelt said. He also identified other areas of the new college’s focus to be its core curriculum, which students are required to take in their first two years, excellence in writing and the college’s historic emphasis on work and its relationship to academics.

“We are nowhere near a position of financial security,” he said.

“The board and I have been in discussions because I’m not comfortable with that situation,” Roosevelt said.

The central financial challenge is that the college’s first group of students is not paying tuition, and significant campus upgrades need to be completed before tuition can be charged, Roosevelt said. College leaders have planned for alumni to take up the financial slack until tuition kicks in, but many alumni remain hesitant to give.

“Many donors are still in a “wait and see” mode,” he said. “The complexity is having enough support to get through the next three years while we build a donor base and heal wounds. It’s not an uncomplicated task.”

The college did receive an anonymous challenge grant of $1.5 million until the end of June, Roosevelt said, and fund-raising for that matching grant is going well.

The college is also in the final stages of hiring a new director of development, who will play a significant role in raising money for the college.

The college was thrilled to have 35 out of the 45 students it accepted choose to attend Antioch, 10 more than expected, he said. Because the first-year class is larger than expected, the second-year class, which had been envisioned at around 50, will likely be larger as well.

The new students have an overall grade point average of 3.56, and 18 of the 45 speak a second language. One is a National Merit Scholar finalist, two are semi-finalists and several completed rigorous secondary school programs, including International Baccalaureate.

One new student has been a circus performer, one a blacksmith, and the group includes musicians, journalists, filmmakers and students with “extensive experience in restorative social justice and leadership at their previous schools,” according to the report.

Twenty percent are students of color, including three African Americans, one Hispanic, one Middle Easterner, one Native American and one multi-racial student. Sixty percent of the new students are women.

But the college has not yet achieved the diversity in the student body and the new faculty that would be consistent with Antioch College values, Roosevelt said, in response to a question from board pro tem member Prexy Nesbitt.

The college has hired three tenure-track faculty, in the areas of chemistry, philosophy and anthropology, and will soon announce the hiring of three more, in Spanish, the arts and literature, Roosevelt said.

“We had an enormous amount of interest in these jobs,” he said, regarding the number of applications received. While the sluggish economy accounts for some of that interest, many applicants also expressed specific interest in the traditions and values of Antioch.

Roosevelt said he continues to talk with former Antioch College faculty, and “desires to place as many former faculty as possible” at the college. Roosevelt described the talks as a “delicate” conversation that continues to move forward.

A key staff position currently being searched is the college’s dean of community life, “a hugely important job,” according to Roosevelt, who described the position as including work with students and faculty to create the college’s community government and campus culture, along with maintaining a relationship with the Yellow Springs community. That search should be finalized soon, he said.

Searches for a campus facilities manager and director of admissions are also taking place.

While Antioch College is still a “work in progress,” the college continues to move ahead, Roosevelt said. “A lot of work has occurred and there’s much more to be done. But in the main, better days are here.”

At the end of his talk, Roosevelt asked the audience to celebrate the successes of the past few years.