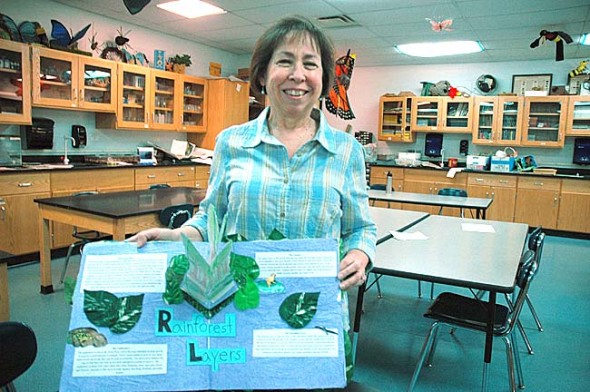 McKinney School seventh- and eighth-grade science teacher Terry Graham retires at the end of the school year to return to science field work and spend more time with family. Here Graham shows off a student project on the rainforest. During her 12 years at McKinney, Graham said she enjoyed encouraging student creativity and teamwork through projects. (Photo by Megan Bachman)

From classrooms to coral reefs

If youth development is like a caterpillar transforming into a butterfly, then middle school is definitely the metamorphosis stage, according to McKinney science teacher Terry Graham. In her 12 years at McKinney, Graham has seen her work as helping students believe in themselves during this awkward stage as much as exposing them to the awe-inspiring world of science. Now entering a new phase of her own life, Graham, a former field biologist, retires at the end of the school year to head back into the field.

“I want students to know life doesn’t end after retirement,” said Graham, 61, who plans to do research in Belize on coral reefs, write science curricula and spend more time with family in retirement.

Still, leaving McKinney is bittersweet, Graham said. Though she is excited to continue her work as a scientist and educator and feels she’s accomplished much in her career, Graham will miss the students, who are each so unique, she said.

“Part of teaching is developing the whole student,” Graham said. “I loved being able to get to know them and work with them.”

While Graham taught both 7th grade life science and 8th grade earth science classes at McKinney, next year teachers Jeff Collins and Jack Hatert will split the duties, which is somewhat gratifying to Graham, who joked, “it takes two teachers to replace me.”

YSHS and McKinney School Principal Tim Krier said Graham will be missed as a teacher, longtime McKinney team leader and member of various committees at the school.

“Probably no person has served on more committees and served well,” Krier said. “She’s given so much to the district, not only to students in her class, not only to her peers, but also to the larger K-12 perspective through her leadership.”

A native of Racine, Wis., Graham said traipsing around the area’s abundant rivers, lakes and fields as a youth inspired her to go into science, while being active in youth leadership through her church and Girl Scouts laid the groundwork for later becoming a teacher. After working as a field biologist and teaching at Racine Junior High for five years, Graham moved to Yellow Springs when her husband, John, now deceased, landed a job in Antioch College’s development office. She then worked at the Fels Research Institute and at Wright State University with Alex Roche, a pioneer in the development of growth charts for children.

Graham initially got her teacher’s license because of a tough job market for scientists, but “grew to love teaching,” she said.

“It’s a real rewarding experience,” Graham said. Her favorite part of teaching science is exposing students to unseen worlds on either end of the spectrum — microbes on the one end and planets and stars on the other — and “grossing them out,” by studying parasites or dissecting frogs, she said.

Despite the challenges of middle school, which Graham said is a place where many teachers fear to go, she enjoyed being able to teach them sophisticated science while still being able to joke around.

“I like that they can still explore,” Graham said of that age.

“I really love to bring in other aspects of the curriculum into science,” Graham said. “You don’t learn language arts in isolation from science, you use it in science. Math is science and science is math. I like to teach the interconnectedness [of all subjects.]”

For example, her students produce pop-up books on the rainforest that feature works of literature and poetry, artistic drawings and information on the mathematical symmetry of species. While building three-dimensional insects, creating biome dioramas, producing board games, charting genetic offspring, or designing paper airplanes, creativity is always a part of the learning process, Graham said.

“That’s what science is — that’s what makes it fun,” Graham said of her projects. “We learn it, but we also apply it.”

Student Ella Rose Smith agreed, saying that Graham’s class is “fun and you learn a lot.”

Project-based learning is all the rage in education these days, but has long been a central part of science, said Graham, who has always opted for activities over worksheets. Still, projects require more vigilance on the part of the teacher and accepting a little bit of chaos in the classroom.

“I don’t mind a little noise and clutter as a long as students are focused on their project,” Graham said.

Projects also require a lot of materials, which at times has been a challenge with declining school budgets for equipment and materials, Graham said. So she’s become an expert at recycling and using found materials, from turning old receipts into geologic timelines to sourcing her own rocks and minerals from the environment. But even Graham draws a line.

“I can get the pond water, but I’m not going to catch my own frogs,” Graham said.

Helping with classroom funding freezes was the Mills Lawn and McKinney PTO, which Graham helped to re-organize and through which funds were raised for classroom materials, scholarships and class field trips. In fact, Graham was heavily involved in the school community outside her classroom, in part because her children Dhyana, Mahya, Chandra and Kayla all went through Yellow Springs Schools.

Serving the local school district was a focus for both Graham and her husband, John, an eight-year member of the Yellow Springs School Board who died in 2001.

“Public education was our passion,” Graham said. “Without a strong public school system, democracy doesn’t have a future.”

Graham said this passion comes from being a product of the late 1960s and early 1970s, when the importance of giving back to society was stressed.

“I wanted to teach kids how to think and to think critically and become positive members of society,” Graham said. “I want them to have power and education gives them that.”

In the middle school students who are neither “cute caterpillars,” nor butterflies, Graham instilled the importance of respecting themselves and others, she said. She treated them to praise on a job well done, while nudging them never be satisfied with just being okay. Student Taran Pergram said Graham’s class can be hard, but that she is always accessible.

“She’s helpful and she’s always there for anything that you need,” he said.

In her one-on-one interactions, Graham always focused on the larger purpose of education.

“A lot of teaching is helping kids recognize their capabilities, and helping them realize there’s life beyond high school and middle school,” Graham said.

As far as her life beyond McKinney, Graham wants students to know that as a scientist she’ll be onto new adventures, since “being a scientist isn’t wussy.” And though Graham looks forward to new opportunities, she probably won’t stray far from her educational mission.

“Once a teacher always a teacher,” she said.