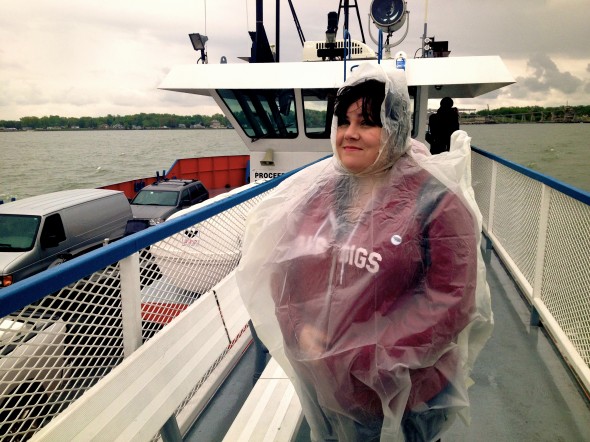 On a boat in the rain in the middle of Lake Erie. (Photo by Anthony Fife)

BLOG — Another season, another reason

This time about a year ago, my husband Anthony and I were on our way home from Austin, Texas, where my best friend and internet-ordained clergy member Cherie had presided over us as we said our very silly, but very legally-binding vows of marriage. As years of sitcom watching have taught all of us, it is apparently super important that, once you get married, you always remember the exact date that it happened and then do or buy something to prove it. Thankfully, Facebook exists, so I’ll never have to remember anything again. So this past weekend, Anthony and I packed up the car and headed up to Sandusky for a couple of wild days doing the kinds of things married people do on their anniversary: exploring Ohio’s fascinating historical sites and monuments.

For those who aren’t aware, the Ohio Historical Society maintains 58 historical sites throughout the state. For the really adventurous, the society also published the Ohio History Passport, which lists all the attractions and allows the intrepid to collect a very cool, and in no way nerdy, sticker for each place visited. Over the last year and a half or so, we’ve made it our family mission to visit all of the places in the passport, and in this way, not only learn about Ohio history, but truly conquer it.

There are several Ohio history sites to be seen in and around the Sandusky area, but our true purpose for the trip was to visit the Glacial Grooves Geological Preserve on Kelleys Island. The preserve is a 400 foot crack in the earth, marked by deep, winding grooves that were scored into the limestone bedrock by the slow movement of glaciers millions of years ago. Sure, we’ve been to some neat museums and settlements; last summer we rode a boat pulled by a mule down a restored section of the Miami and Erie Canal, which was, again, super cool and not at all nerdy. But something about glaciers puts the whole thing on another level, and that empty, sticker-less page in our passport called out to us. 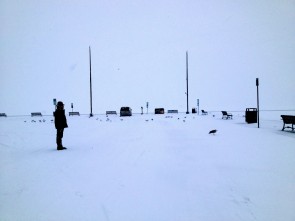 Anthony observes the frozen desolation of one of America’s Great Lakes, and wonders what cosmic mistake he could possibly have made to wind up here.

I first tried to take Anthony to Kelleys Island at the end of last year for his birthday; I booked a motel room, got all the information about taking the ferry out to the island, and we loaded up for the weekend. However, this was the first week of December, and a snow storm hit while we were on our way. Needless to say, by the time we got to Lake Erie, the ferries weren’t going anywhere.

Because of this, I was pretty determined that, this time, everything was going to go smoothly. Our daughter, Lucy, had gone up to Albany with her grandparents to hang out with her cousin, and I trusted that, in May, the lake would probably not be iced over. We had a room booked and an itinerary laid out. All that was left was to make it to Sandusky unscathed and step on the ferry on Saturday morning.

So of course, Thursday night, I went to Kings Island and sprained my ankle getting on a roller coaster. And this was not one of those horrific amusement park ride injuries you hear about on the news, where some malfunction in the machinery causes a terrible tragedy. This was just a supposedly responsible adult being really excited to ride Flight of Fear and, in her haste, stepping down into the seat and cracking her ankle almost 90 degrees to the inside, and instead of seeking immediate medical attention, sitting down and putting her harness on and riding the roller coaster anyway. 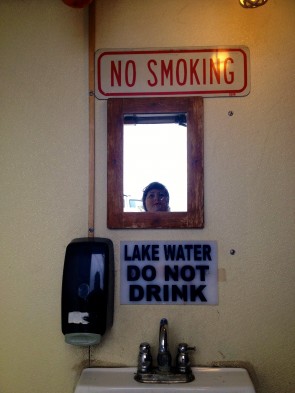 Lake water from a ferry boat bathroom: not good for drinking, but probably totally okay to wash your hands in.

But one little puffy, purple ankle is no reason to cancel an anniversary trip, right? Of course not. Saturday morning I hobbled onto the Kelleys Island Ferry with Anthony, excited to cross Lake Erie for the first time on a loud, garish orange boat. Of course, it was 45 degrees and raining, but that’s why God invented the poncho. Once on the island, we first visited Inscription Rock, a series of prehistoric pictographs that were probably really impressive before they were smoothed away to oblivion by the elements. But this was not the big show we were here to see; the Glacial Grooves were on the northwest side of the island, and we were on the south.

After 20 minutes of walking proved that trying to get some place without flexing your ankle is not ideal for expedient travel, we decided to rent a golf cart to get us to our ultimate destination. This was where we learned that a golf cart at maximum speed in the wind and rain is also not ideal for expedient travel. To ladies and gentlemen who like to wear mascara, I would also point out that, should you plan to travel in this manner, abandon your eye makeup in advance, because it will betray you. 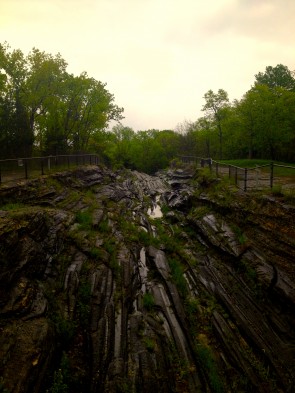 We did finally make it to the Glacial Grooves and, I have to say, it was worth the effort. We spent as much time there as we feasibly could in the rain, then headed back to Kelley’s Island’s downtown area to return the golf cart and warm up in a bar there. I was reluctant to leave that warm, dry building; I took as long as possible to eat my basket of fries. When they were gone, I looked out the window at the persistent rain and said, “I think we should just live here. In this bar.”

But eventually we had to go; Anthony and I kept taking turns going into the bathrooms and warming up under the hand dryers, and I think the waitresses were starting to get weirded out. We boarded the ferry again and headed back over the lake.

Of course, once we docked back in Marblehead, the rain stopped, and the sun came out.

That evening, after warming up with a change of clothes and some Thai food, we lay in the motel room watching an “American Pickers” marathon on the History Channel. The day hadn’t turned out quite like we’d envisioned it when we began planning, but I couldn’t really be disappointed. It was slightly miserable, but we were mostly healthy, mostly whole, we’d been fed, we had a lot to laugh at and we still liked each other. And for the record, we had now hit 29 of Ohio’s 58 society-sponsored historical sites. It wasn’t a bad end to a day, and not a bad way to wrap up a year of marriage. 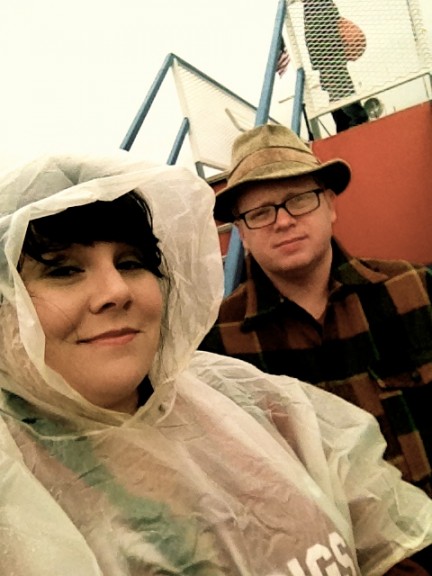 You can just see the passion burning in our eyes, can’t you?

5 Responses to “BLOG — Another season, another reason”