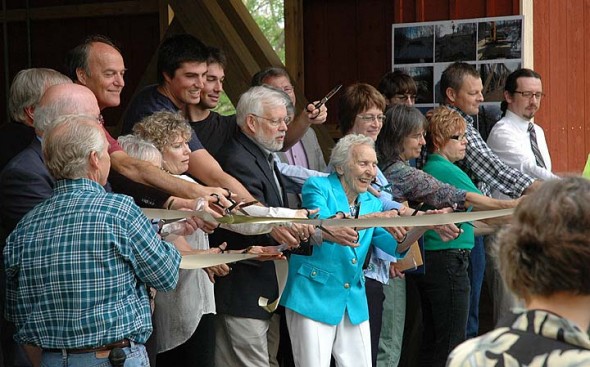 About 200 people gathered Friday morning, May 9, for the opening and dedication of the new Richard P. Eastman Hyde Road covered bridge. The structure crosses a section of the Little Miami Scenic Trail. Present at the ribbon cutting are Richard Eastman's wife Wilberta "Billie" Eastman, at front, with son John at left. (Photos by Carol Simmons)

About 200 people gathered Friday morning, May 9, for the opening and dedication of the new Richard P. Eastman Hyde Road covered bridge. The structure crosses a section of the Little Miami Scenic Trail, the bike and recreation path that Eastman, as a longtime Greene County Engineer, was instrumental in funding and building.

The dedication ceremony included the reading of proclamations from the Village, Ohio Gov. John Kasich and the Ohio House of Representatives and the reading of a resolution by the Greene County Board of Commissioners, all honoring the life and legacy of Eastman, who died in 2012 at the age of 92.

Among those in attendance were representatives of the Village of Yellow Springs, Miami Twp. and Greene County governments; the companies and work crews that designed and constructed the bridge; Green County Parks & Trails staff; area engineers; and Eastman’s family, friends and former neighbors.

Speaking for the family, son John Eastman, a Miami Twp. Trustee, said he wanted the gathering to know “how much it means to the family that this bridge was named in Dad’s honor and so much represents who he was an his love for the community.” The first official drive across the bridge was given to Eastman’s wife, Wilberta “Billie” Eastman, with John at the wheel.