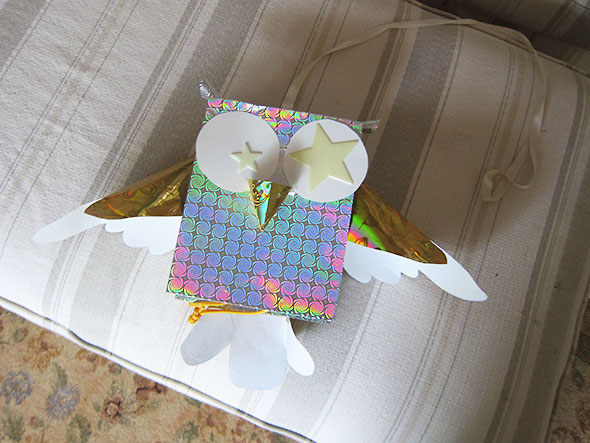 Last week my daughter received a letter by post. When I returned home from a grocery run, she was standing in the living room…still holding the parchment paper and grappling with its portent…aghast. If the letter had arrived in the usual manner, it would have been pressed into a thin envelop and delivered by the postman who walks our neighborhood midday. Instead, this letter had been rolled in a hollow scroll and delivered by owl post. A brown owl with big yellow eyes arrived at our house shortly before bedtime, and now the house was wide awake with energy. Who could sleep with this news? Our daughter had been accepted at Hogwarts.

“Hogwarts School of Witchcraft and Wizardry”, she held out her letter for me to see—all earnest amazement—and then said, “I always knew I had it in me.” I laughed and imagined the same words coming from Hermione Granger—Harry Potter’s noble friend and ace student from J.K. Rowlings’ fantasy series—when she received her acceptance letter to Hogwarts. Her words spoke not of pride but of a vibrant inner voice that’s sure the world holds far more than it had yet revealed. 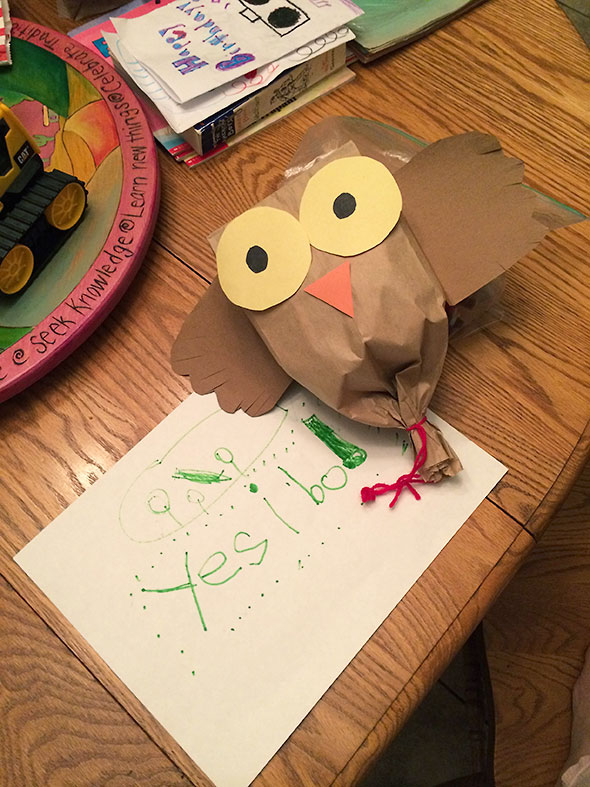 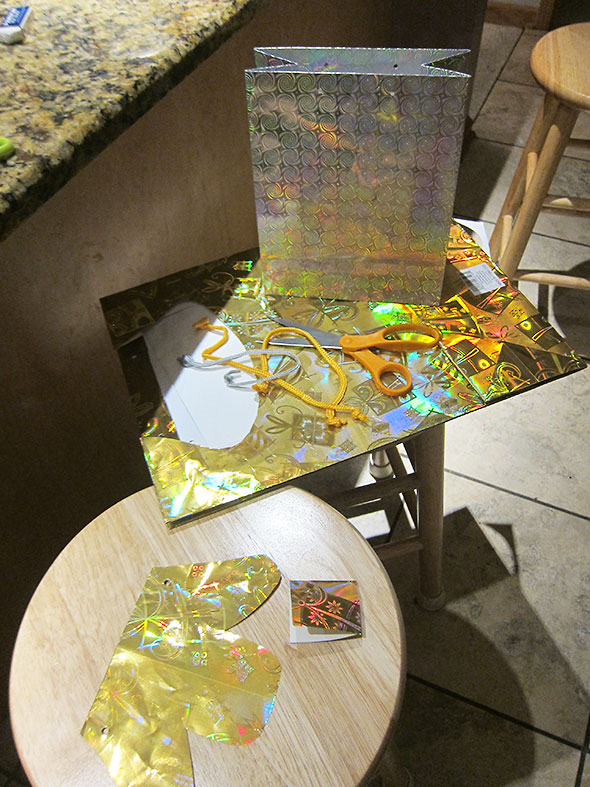 The shock having worn off, she immediately set to fashioning her reply. “I bo!” read her first draft, a fitting enough response for a future witch. I was charmed by the school’s brown owl, loving its playfulness and ingenuity. Taking inspiration, I wondered aloud if Hedwig, Harry Potter’s snowy white owl, should return our daughter’s response and, at her enthusiastic “Yes”, we started rummaging through the family’s collection of gently used gift bags for something small and white. 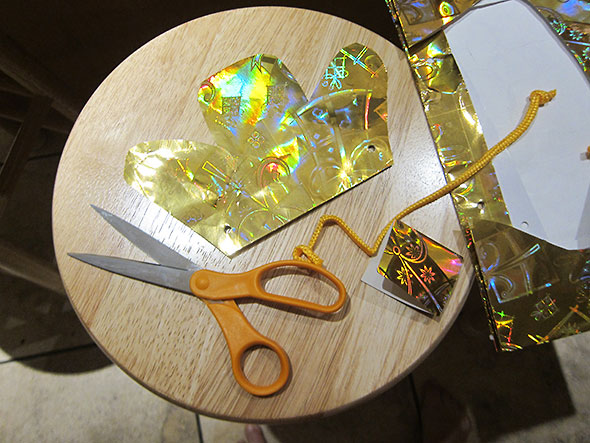 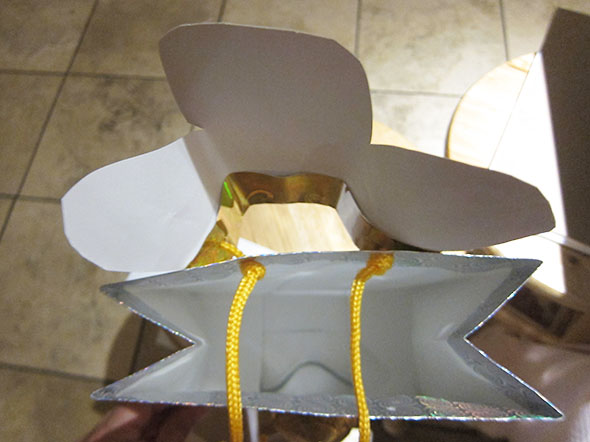 I was surprised to find nothing of that description. Large and white, small and purple, reindeer and Santa Clauses, baby carriages and balloons, but no small white gift bag. I thought of running to Current Cuisine for one of their take-out sandwich bags but, in putting back our stash of gift bags, I paused over a medium-sized silver bag with a repeating kaleidoscope-like pattern. I held it up for my daughter’s inspection, and her gasp told me that I had scored a great find. We paired the silver bag with a larger gold bag—from which we could cut the owl’s tall feathers and wings—and returned to the kitchen to work.

Back in the kitchen, we dismantled the bags. We untied the knots holding the gold and silver cords that served as handles and unlaced the little two-inch-square gift card attached to each bag. Taking stock we had the following:

A planned formed to use about everything. We’d cut a set of wings and tail feathers from the gold bag and use its matching gift card for the owl’s beak. The cords could be used to hold the wings and tail in place. In phase one, we’d add a tail, beak, and eyes. In phase two, we’d add the wings.

First, we worked on the tail feathers. Our plan was to cut the tail feathers from the gift bag and to take advantage of the set of punch holes that used to hold the cord handles. Those holes offered a seating place for tail feathers. I cut out a large oval at the top of the gold bag where two of the punch holes were located. To form a symmetric tail, I folded the oval in half so that the two punch holes lined up and then cut the feathers. To attach the gold tail feathers to the silver bag, we matched up a silver and gold punch hole and threaded a gold cord through both. The space between the punch holes is wider on the gold bag than on the silver bag; thus, the attached feathers arch away from the silver bag creating a three dimensional tail. To hold the tail fixed in place, we tied simple knots: one on the outside against gold paper tail and one the inside of silver bag. The excess gold cord we left to dangle for the owl’s legs and feet. 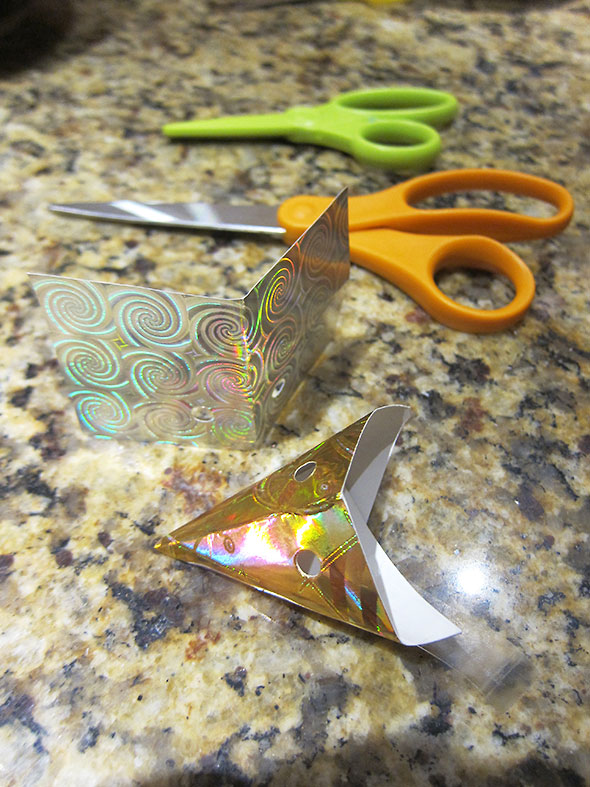 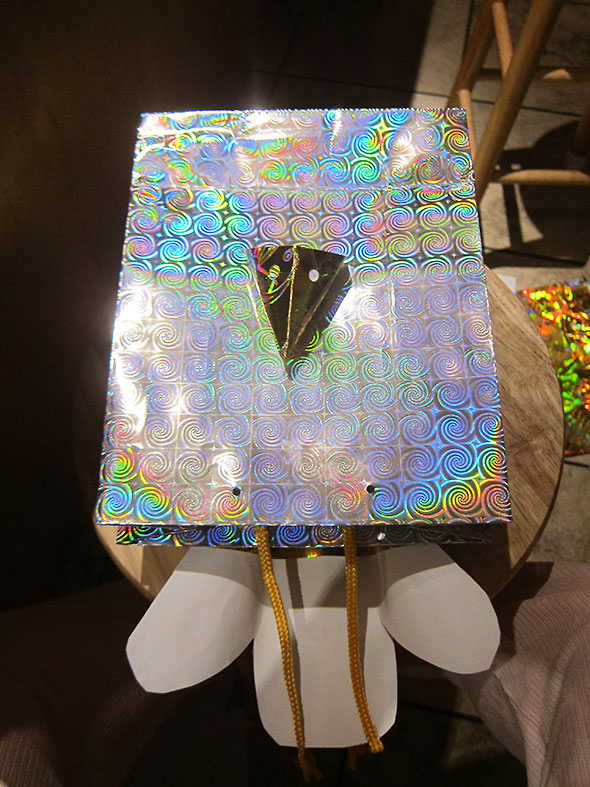 Next, we fashioned the owl’s beak. For this, the gold gift card was perfect. The two punch holes through the card suggested nostrils, and the gold color provided a proper contrast from silver. Holding the card fold vertical with its punch holes up and its gold surface toward me, I turned the bottom corners of the card up and away from me to form a cone. We placed double sided tape to hold the overlapping edges of the cone together and then to attach the gold beak to the silver bag. 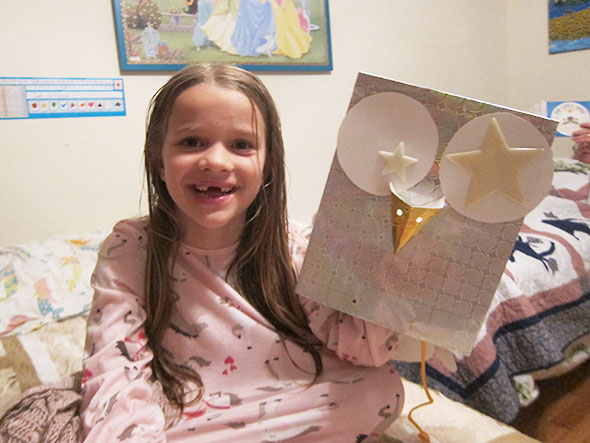 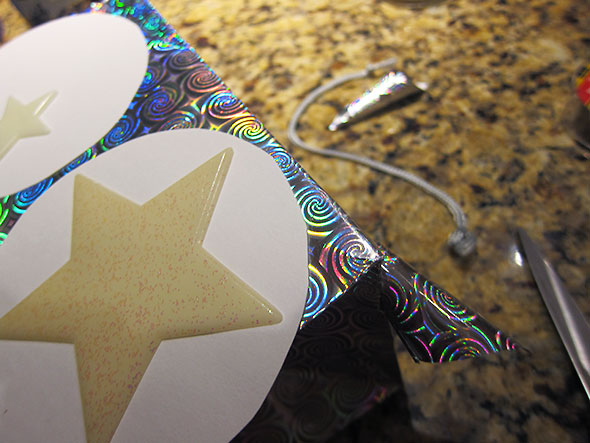 We cut out big white circles for the eyes, and my daughter attached them with double sided tape. She also found two glow-in-the-dark stars—mismatched in size—for the owl’s goggly eyes. We were pleased with phase one of our Hedwig, but her head looked rather square. To enhance her profile, we decided to make her ear tufts. 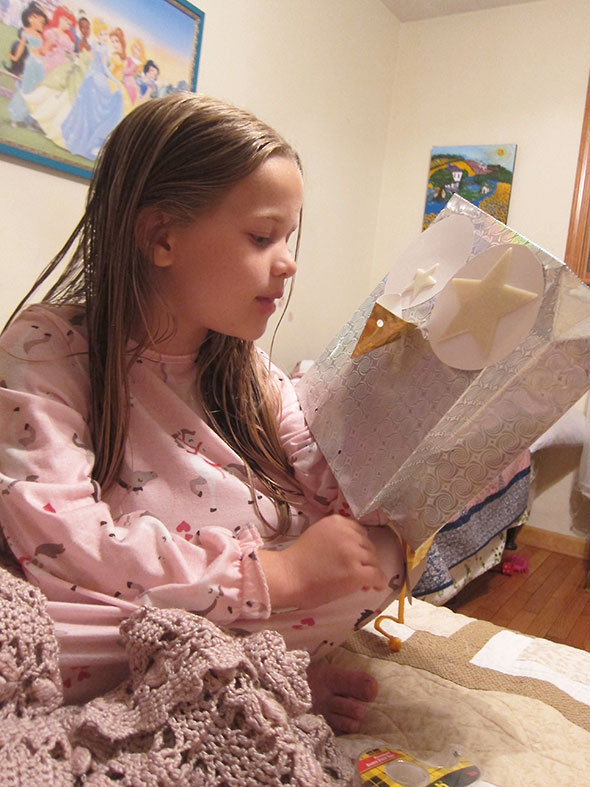 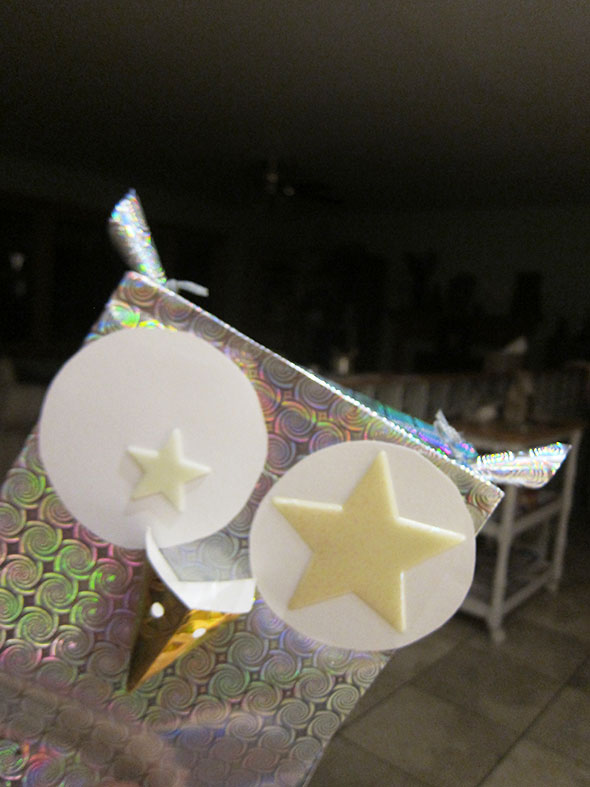 Owls that live in wooded areas tend to have tuft feathers, and their purpose was exactly ours to enhance the owl’s profile. Owls stand up their tufts to make them look bigger and stand them down to blend in to the background.

For our owl’s ear tufts, we picked up the silver gift card and cut it in two along its fold. Once again, we formed a cone with each half. However, unlike the beak, this time we made sure that the punch hole was at the pointy end of the cone instead of at its flare. We then attached one ear tuft to the top of the owl’s head by threading a silver cord through the tuft’s punch hole and then through a seam at a corner of the bag. To attach the second ear tuft, we threaded the cord back through the fold on an opposing corner and through the punch hole of the second tuft. In this way, we completed phase one of our owl. With only the wings remaining, we set our new friend aside for the night and dreamed of her nocturnal adventures. 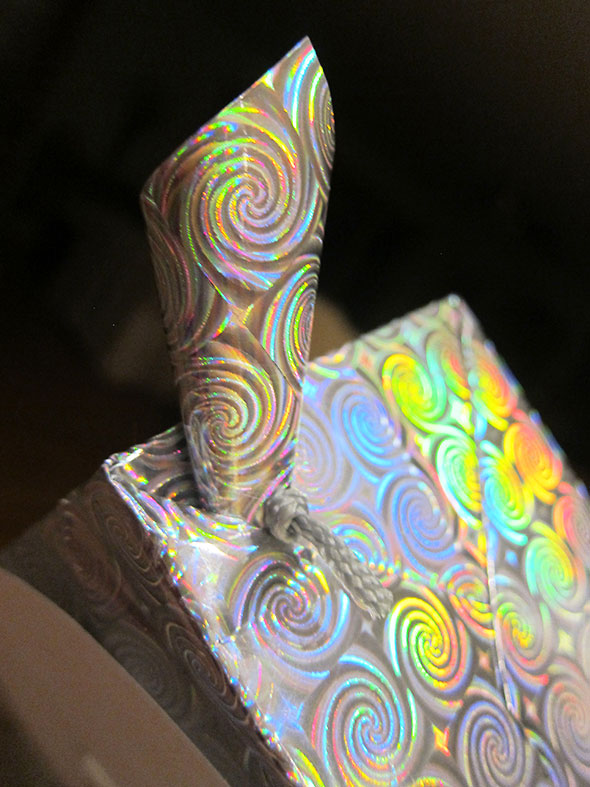 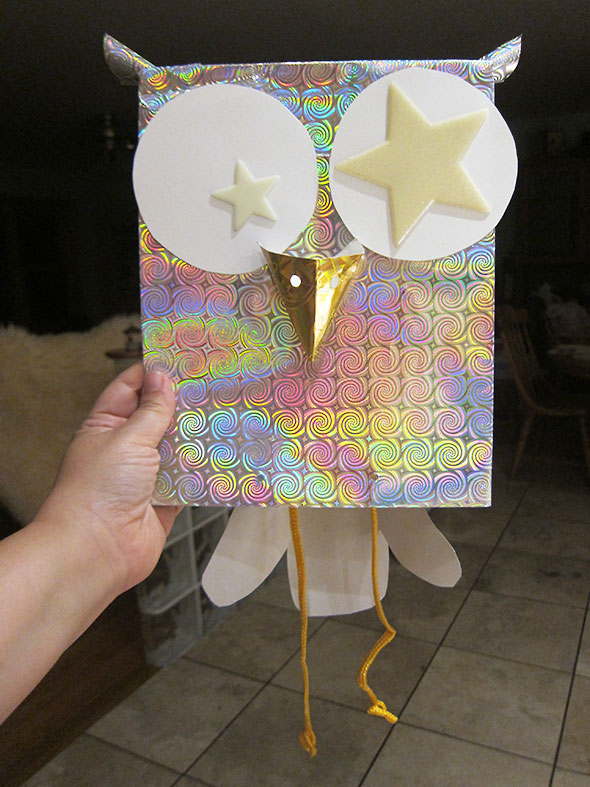 We worked on Hedwig’s wings the next day. This second phase required strategic thought. We had only enough material for two wings so we had to be sure of our cuts and we only had one silver cord left to attach both wings. We drew three prototype wing shapes on tracing paper, rejecting the first as too simple and the second as too complex. The third wing prototype split the difference and took up nearly a whole 8.5 inch by 11 inch sheet of paper. 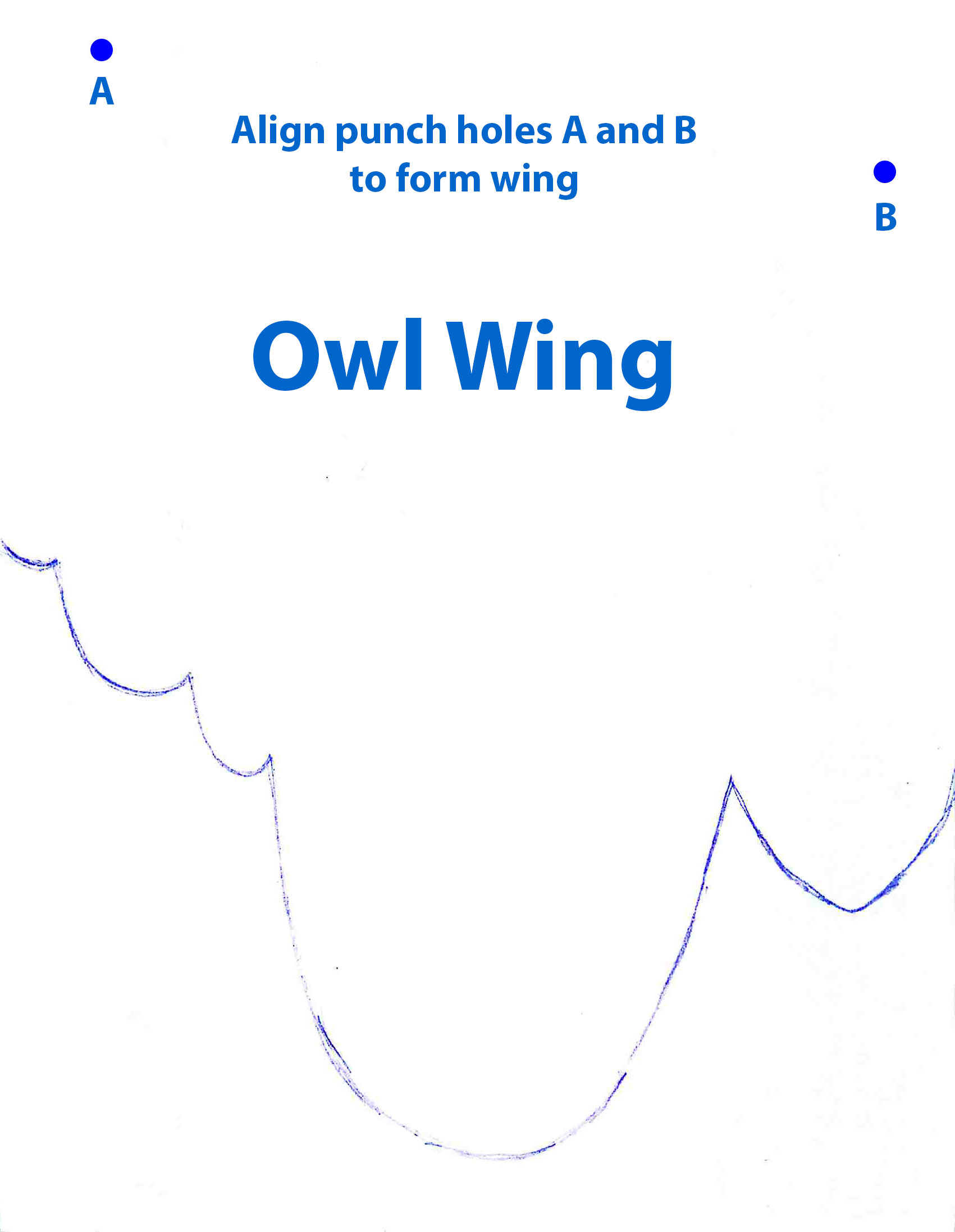 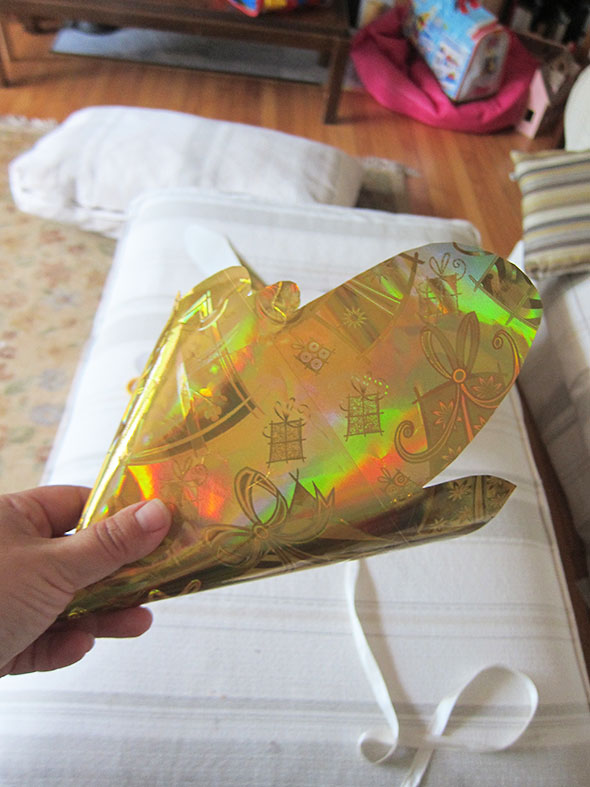 We cut out each wing with its straight edge along a fold keeping some of the overlap to reinforce the wing edge. We formed a cone-shaped wing and punctured its underside with a hole punch so that we could fasten the wing to the sides of the owl. We cut a small slit along the recessed fold of the silver gift bag to place the first wing and lined the hole with tape to strengthen the joint. The last silver cord threaded through the wing and the slit, and I tied a knot on both sides of the joined paper. We then cut a slit on the second side and threaded the silver cord through to attach the second wing. Finally my daughter produced a white silk ribbon for our owl to float on. We tied the ribbon to the cord that held the ear tufts on and threaded it out through a seam on the top of Hedwig’s head. 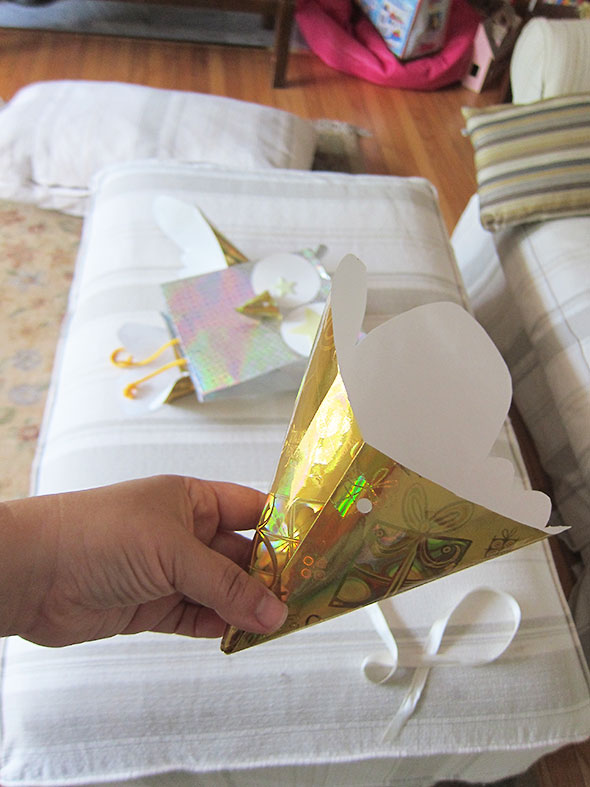 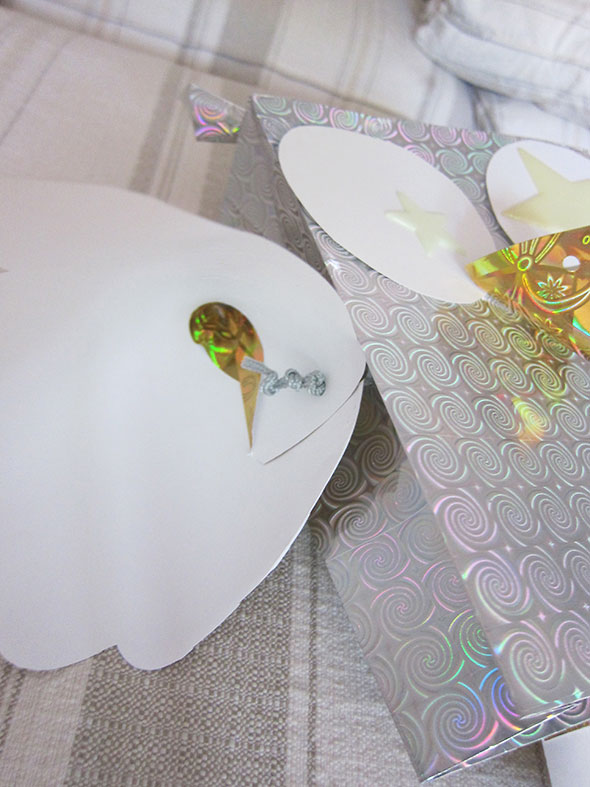 Hedwig was finally ready to send our owl post, but at that moment a heavy rainstorm began. We looked outside almost broken hearted at the forced delay. My daughter was anxious to send her reply however and refused to abort the mission. She insisted that the post go through that night. I had a flash of inspiration and grabbed a huge black parasol from the front-door umbrella stand. Opening up its canopy, Hedwig flew underneath, and we attached her missive to the golden cords at her feet. Sheltered under her magical umbrella, she flew off to Hogwarts, and that very night in the pouring rain Professor McGonagall unscrolled our daughter’s acceptance letter and entered her name in the school rolls. 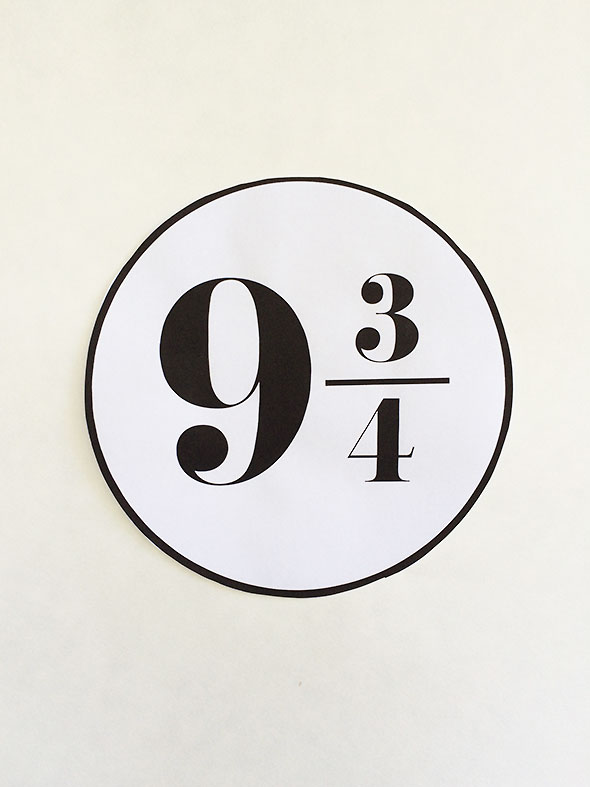 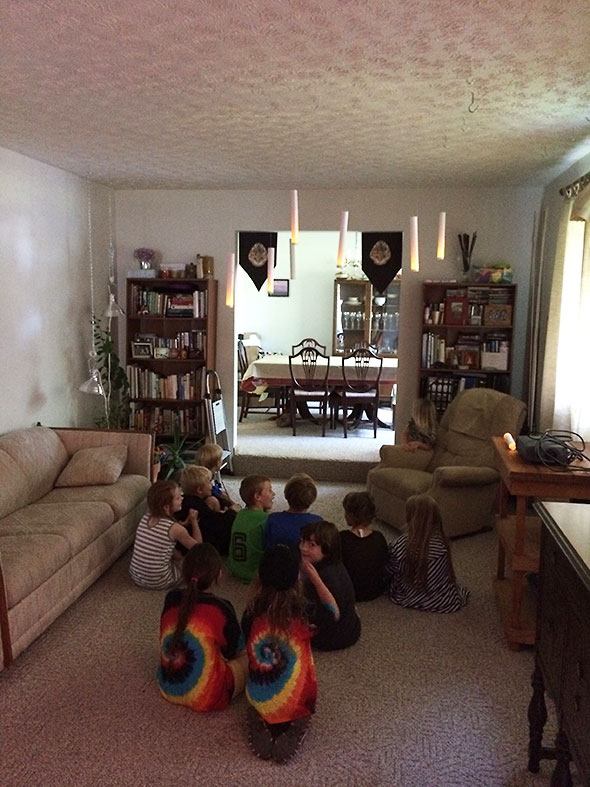 The following Friday our daughter slipped through the barrier onto Platform 9 3/4 and entered the Great Hall for the sorting of the freshman class. She was sorted into Hufflepuff for her loyalty and kindness and sat down with her classmates looking up at the Great Hall’s ceiling which flickered from the light of magically suspended candles. 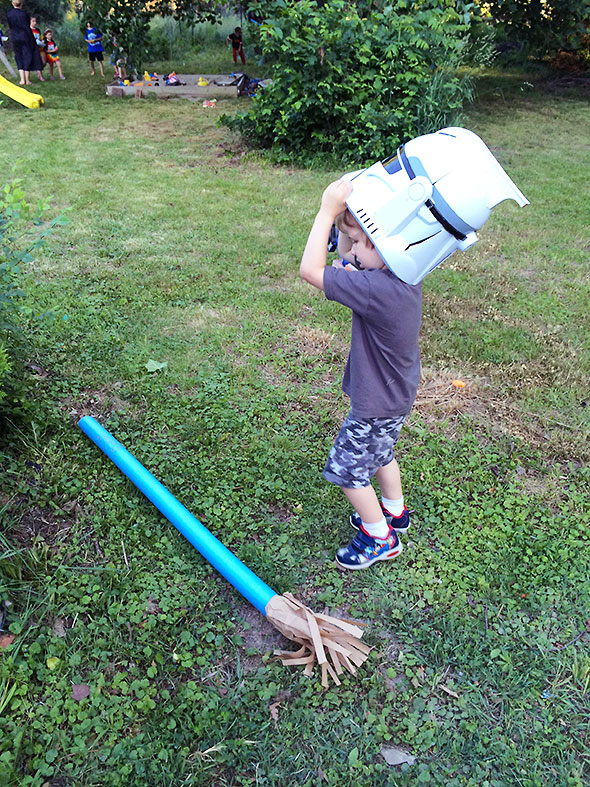 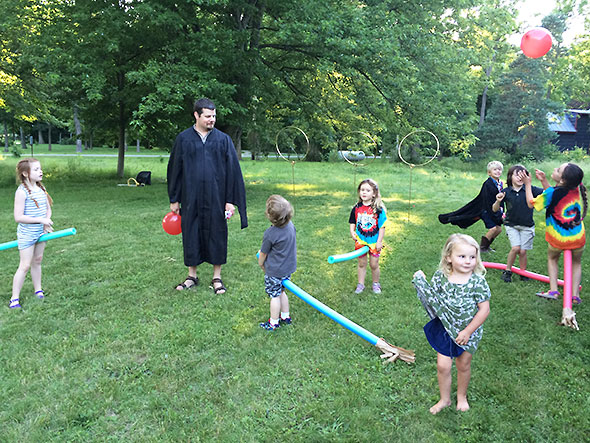 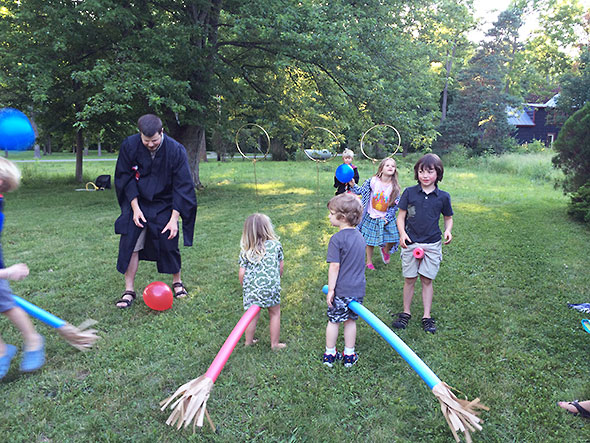 After a feast in the Great Hall, the school’s students had a potion lesson from Professor Snape and a rousing game of Quidditch refereed by Professor McGonagall. The students flew about the field on lightening-fast broomsticks, Firebolts for all, personalized for each enrolled student. A red balloon served as the Quaffle, and the students scored goals by tossing it through golden hoops on either side of the quidditch court. Each team had two Bludgers—blue balloons which temporarily froze players that the game balls touched. Each student got a chance to play Seeker in the game and seek out the elusive Snitch, a small golden ball with feathery wings that might zip here and there about the field and bestow a bounty of game points to the successful seeker. 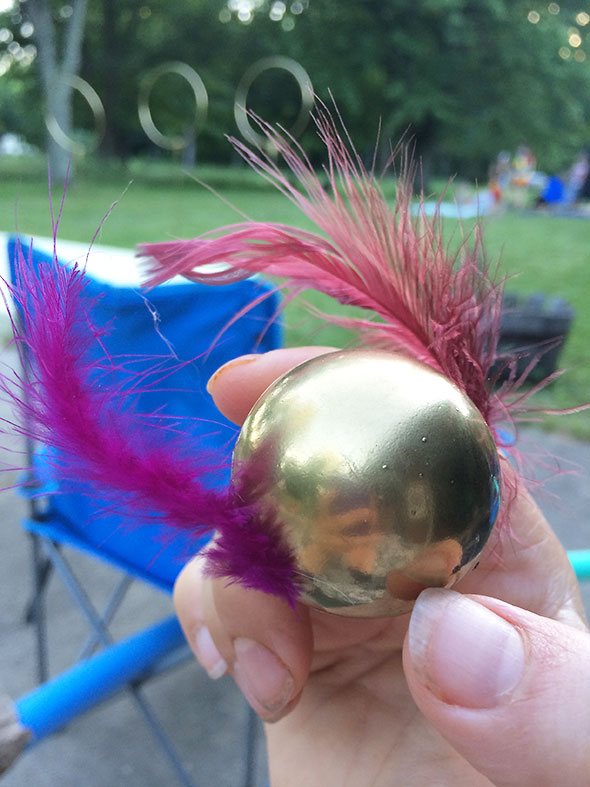 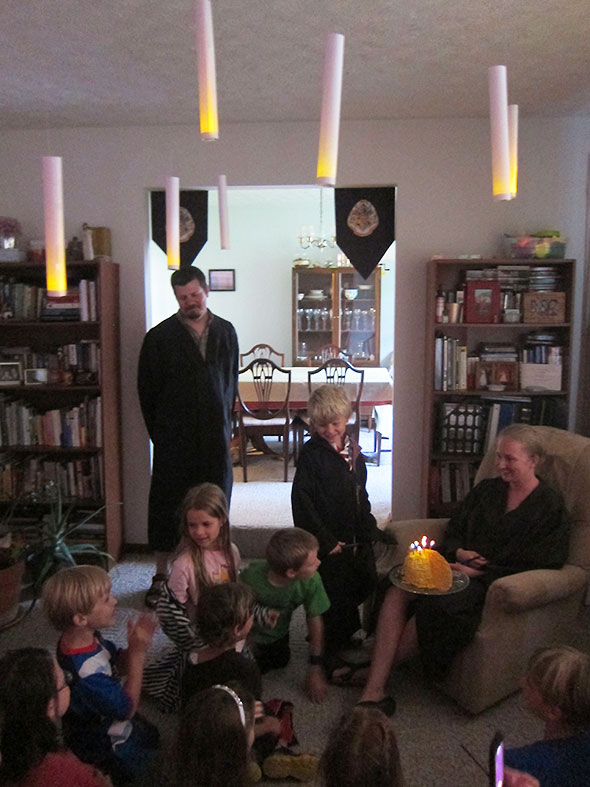 As night fell, we returned to the Great Hall for a final treat, a vanilla cake enchanted to form a giant golden snitch. The children gathered round flush and excited from their first day at Hogwarts, content to be accepted within the fold of dear friends. They joined in rousing chorus wishing one among them—a blond young man with a dark scar painting his forehead—a happy birthday and the glorious start to a most promising year.