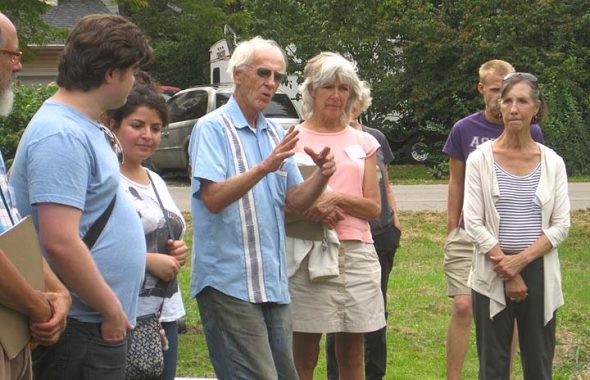 Last fall about 50 people toured the High Street garden of Al Schlueter, shown above gesturing during the tour. A second tour of Schlueter’s garden, along with those of Macy Reynolds and the Antioch Farm, takes place this Sunday, Aug. 14, beginning at 10:30 a.m. in the parking lot behind the Wellness Center. (Submitted photo)

A growing interest among villagers around local food has sparked several upcoming events, including a garden tour and a series of potlucks. And the interest has led to an ambitious effort to make the village a regional food hub, with an initial step of creating a commercial kitchen as the first component of a community economic incubator.

The growing interest and energy around local food can be linked to the issue’s intersection with a variety of villagers’ concerns, including environmental sustainability, small town resiliency, economic development, nutrition and physical health, along with the pleasure of eating fresh food.

“We have a good group of people and it’s getting larger all the time,” according to Macy Reynolds of the local food committee of the Resiliency Network.

That energy and enthusiasm has led activists to begin pursuing an ambitious vision of making Yellow Springs a food hub in the region. The first step toward doing so is creating a commercial kitchen to help those who aim to pursue a local-food based livelihood.

“We’re trying to meet the needs of people who are trying to make money from growing local foods,” Reynolds said.

Such a commercial kitchen would serve as a resource for farmers, entrepreneurs, caterers, villagers and Antioch faculty, staff and students, according to a document recently released by Community Solutions. It would provide services such as preparation space for bakers and food processors, storage space for food trucks, teaching space for classes on food preparation and preservation and entrepreneurial opportunities for food businesses.

And the kitchen would be the first component in a larger vision of a community economic incubator, according to the document. Such an incubator would provide shared services and support for start-up businesses.

Community Solutions sees itself not as the sole mover-and-shaker on the project, but rather a participant that enables the process, according to  Jennings last week.

“I see Community Solutions as not leading the charge, but being willing to broker the conversation and make things happen,” Jennings said, stating that the conversation around a food kitchen had predated her coming on the job two years ago.

The nonprofit has identified the central back wing of the Sontag Fels building on the Antioch College campus as a potential site for the kitchen. The site, which is adjacent to the Community Solutions offices, is a likely location because it has ample space, including space to build out to create a full community economic incubator, access to an underused parking lot and a central location for both the college and the community, according to the Community Solutions document.

Community Solutions is currently in talks with Antioch College, which owns the building, regarding the project, according to Jennings. While the hope is that the college will choose to partner with Community Solutions on the commercial kitchen and community incubator, organizers plan to go ahead and find a different location if the college chooses to not be involved.

The purpose of a community economic incubator is clearly in line with Community Solutions founder Arthur Morgan’s philosophy of the value of small communities, and the need to strengthen their economic infrastructure by creating many small businesses.

“He saw people as leaving small towns because of the lack of interesting jobs and interesting conversations,” Jennings said. “He believed that democracy thrived in the small community, but that democracy is meaningless if you don’t have economic structures.”

Organizers for the project aim to spend the next year surveying the area and community regarding the needs of those involved in local food production, according to local food committee member Julia Navaro, a 2016 graduate of Antioch College and current employee of the Antioch Farm. Other priorities include creating a business plan and cost analysis. According to Jennings, a very rough estimate is that $1 million will be needed for the project, with half coming from grants and the rest from donations. The group estimates a three-year period for planning, development and build-out, with an estimated opening of the food hub in the summer of 2019.

The time is right to move forward, organizers believe.

“I’m really excited,” said Navaro. “This has been a conversation at Antioch for a while now.”

Those interested in local food issues can take part in two upcoming events, sponsored by the local food committee of the Resiliency Network.

This Sunday at 10:30 a.m., villagers are invited to join a garden tour of local vegetable and pollinator gardens. The event will start at the Antioch Farm (meet in the parking lot behind the Wellness Center), after which participants will visit the High Street garden of Al Schlueter. Then at about noon the group will tour the Orton Road pollinator garden of Macy Reynolds.

The garden tour is a followup to a similar event held last fall in Schlueter’s large backyard garden, when the focus was on the greenhouse in which he grows greens over the winter. The interest in the tour was robust, according to Schlueter, with about 50 people attending. This Sunday he’ll introduce people to his garden at the peak of the growing season, when he’s ready to harvest “everything you can think of.” At Sunday’s event, he hopes to address people’s questions about all aspects of gardening, including planting, mulching and protecting against animals, as well as learn new tips himself.

“I always get ideas from others,” he said in a recent interview.

Reynolds has been working for about 10 years on her pollinator garden, which contains the various layers of vegetation that insects require for both pollination and shelter, she said recently. She’s also found that creating a garden that draws an abundance of “good” insects keeps down the number of “bad” insects that destroy plants.

“It works,” she said of her garden.

In a second upcoming event, the local food committee will host its monthly Local Foods Potluck, which takes place the last Sunday of every month at 2 p.m. in the First Methodist Church. This month’s event takes place on Sunday, Aug. 28, with a talk by Schlueter on preserving vegetables using the methods of canning, freezing and dehydrating.

The monthly potlucks grew from a series of local food events last November sponsored by the Resiliency Network. A core group that attended the events  has been meeting ever since, according to Reynolds, one of the organizers. Other members include Bob Huston, Beth Bridgeman, Schlueter, Navaro, Tim Honcho, Mike Breza, Sylvia Carter Denny, Nancy Lineburgh, Peggy Nestor, Carmen Milano, and Bonnie and Mickey Wilkinson.

The monthly potluck grew from the group’s awareness that some villagers were reluctant to support local community-supported agriculture, or CSAs, because they didn’t know how to cook unfamiliar vegetables. Consequently, each event includes a cooking demonstration by Milano, funded by a grant from the Yellow Springs Community Foundation.

All villagers are invited to attend the potlucks, and while participants are encouraged to contribute a local food dish, they’re also welcome to join in without contributing, according to Reynolds.