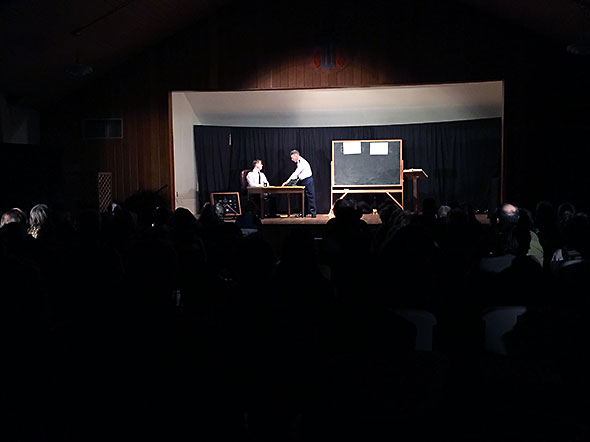 When I joined the ten minute play festival this weekend, my husband Jeremy was right there beside me. Wait, no, who am I kidding? Jeremy was far ahead of me here…way far ahead. I had a small role in one play. Jeremy joined the production as playwright, actor, and costumer.

This play is the second that Jeremy submitted to the Yellow Springs Theatre Company. In the first, Jeremy embellished the meet cute story of how two good friends got engaged. He sent me a draft of the play “I’ll Bet He’s a Good Man” and we fine tuned it together. Seeing that first script lit on stage fired up Jeremy’s brain. His mind churned immediately on a second play. It would be based on his own experiences as a staff officer. It documents the petty little humiliations of performance reports, grooming standards, and ceremonial folderol that often detract from the military mission. 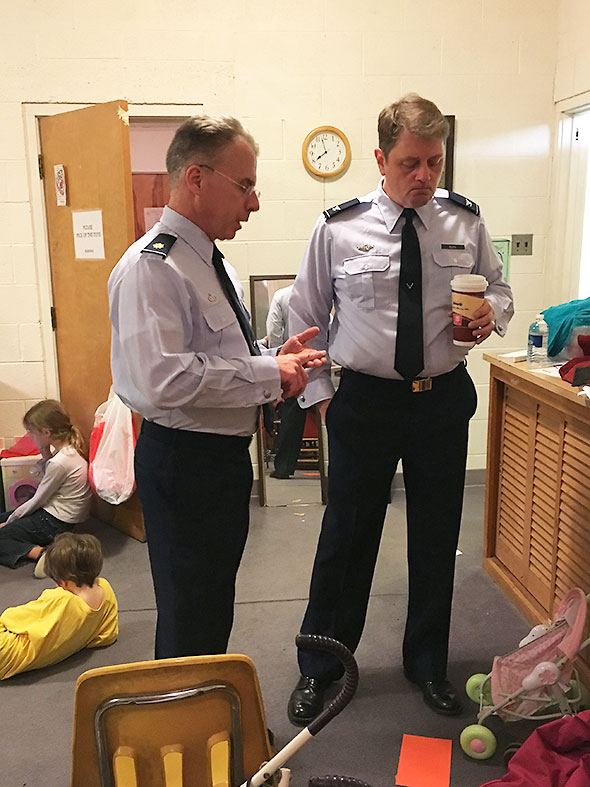 This play Jeremy kept close. Instead of consulting me, he enlisted my brother, a thespian in the local theater scene of Ithaca NY. The new story was a different kind of meet cute…where there is no love lost between the two leads. Jeremy’s play cast a exacting colonel against a seemingly hapless major. The two military peers battle for self respect while actively undermining each other. Wisely, instinctively, Jeremy felt brother Pete could help him develop the voice of the male foils.

Not to say that sister Amy didn’t find a way to influence. Jeremy was in the midst of writing when I joined the YSTC production of Much Ado about Nothing this summer. Jeremy took note of one performance in particular…Thor Sage as Don Pedro or rather Colonel Peter. Our production cast the Shakespeare play in the midst of the American Civil War and Sage transformed the role of prince into a commanding union officer. Each time my husband watched the production, Jeremy came away more deeply convinced he had a part tailored made for Sage.

The bulk of the play was written in July. Revisions started when we went to visit my brother and family in August. It was ready for the submission call for the ten minute plays which came after the wrap of Something Wicked This Way Comes in October. Jeremy heard back in December when Ali Thomas called to offer him the part of the major. Though I hadn’t read it, Jeremy had acted out the play enough for me to agree with Thomas’s casting. Jeremy was a harder sell. “No,” he warned Thomas, “I’m not funny.” He had a hard time thinking of himself as a comedic actor. Thomas assured him however that funny could be taught. “It’s about the timing.” It’s about the preparation too and, for this work, Jeremy is well suited. Thomas successfully recruited Thor Sage to play the colonel and the three of them began meeting regularly in the Virginia Hamilton room at the Yellow Springs Community Library to get the script down solid. As the production date approached, Jeremy pulled together the uniforms for both officers. He spent evenings listening to recorded read throughs of the script. He tailored and tuned words, timing, and projection. On Wednesday, he went all in. He shaved off his beard and got his hair cut high and tight.

His play The Colonel and The Major was listed fourth on the playbill followed by the play The Making of Sailor written by Joshua Hayward and directed by Colton Pitstick. On the nights of the performance, I waited in the wings dressed in my fortune teller garb and listened to Thor Sage’s booming voice and my husband’s answering call on stage. I also listened to the audience as the two actors reeled into combat. Thor and Jeremy drew out belly laughs from the audience but also gasps of surprise. Saturday night went especially well culminating in a hardy round of applause. As they both retreated from stage and advanced toward the green room, I caught a glimpse of the two men dressed in bright limelight and the same blue uniform. They looked at it other in accord and threw their arms up triumph…such a happy contrast to their onstage personas that I almost laughed out loud.

A few moments later, I stepped on stage carrying a leather bound chest overbrimming with tools of a fortune teller. Placing the chest down, I began the next ten minute performance weaving a turban around my head. With that simple strip of cotton, I donned the mantel of soothsayer then turned to convince a young man of his great worth with my simple wares…tarot cards, crystal ball, and runes.

The words we forged for stage, however, are our true instruments of enlightenment.