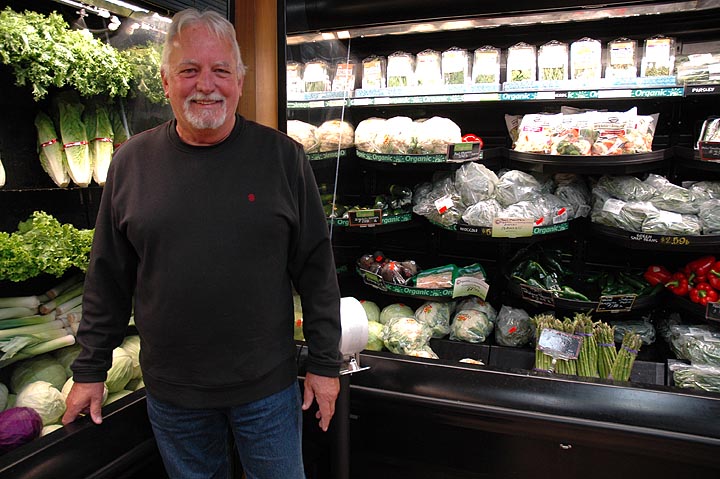 Tom Gray, the owner of Tom’s Market, in front of the store’s produce department, which was upgraded several years ago. A small independent grocery in competition with the recently built Kroger Marketplace in Fairborn, Tom’s Market keeps its focus on responding to customers’ needs. (Photo by Diane Chiddister)

A tiny market, holding its own

Tom’s Market owner Tom Gray knows his customers love their vegetables, so he wants to keep produce fresh. Thus, he has trucks deliver produce five times each week, rather than the one or two deliveries that most groceries receive.

Of course, all those shipments means more work for the store. Three full-time employees work in the market’s produce department — Dave Trollinger, Lori Allen and Todd Wright — trimming the vegetables as they come in, labeling them, arranging them and making sure the sprayers are keeping them moist. And unlike many stores, Tom’s employees avoid wrapping their produce in plastic.

“We don’t want all that plastic,” Gray said in a recent interview. “We know our customers don’t appreciate plastic.”

Knowing his customers and catering to their desires is Gray’s constant priority. It’s a strategy that’s kept this tiny market viable in an age when it’s not easy being a small independent business.

On a recent day, Nancy Mellon was selecting produce for her family. She’s been a fan of Tom’s Market since she first moved to town, when she walked to the store to buy just a few last-minute items for Thanksgiving dinner, then ended up with a bag too heavy to carry. She was amazed when the store’s owner offered to drive her home, then carried the bag into her house.

“He works hard responding to everyone’s needs,” Mellon said, and as well as the store’s customer service, she appreciates its social life.

“In a way, Tom’s is the living room of the village,” she said. “There’s always someone to talk to. I find out more coming to Tom’s than anywhere else.”

While it’s always a challenge to be a small independent grocery in a world of corporate megastores, sometimes the challenge is bigger than others. Tom’s Market is facing a significant challenge right now, after a new Kroger Marketplace opened in Fairborn a few months ago. While there’s usually a dip in business following the opening of a national chain in the area, the impact following the Marketplace opening has been greater than previous ones, Gray said.

“We took a hit after Trader Joe’s and Whole Foods opened, but business came back,” he said. “It’s taking a little longer this time.”

The Kroger Marketplace is huge — in fact, 25 Tom’s Markets could fit in the new store’s 250,000-square-foot area on Dayton-Yellow Springs Road.  Some Tom’s customers tell him they tried the new store but it’s too large, and others encourage him to expand his products in order to compete. Sell beer and wine, for instance.

But Gray feels he’s better off following the strategy that’s kept him going since he bought the store from Bud Weaver 16 years ago.

“We try to take care of our customers,” he said. “We try to get what they want.”

The store keeps a suggestion box on the front counter, and Gray, who has worked at the store since 1965, when he was 15, reads through it weekly. If a customer wants him to stock a specific product and he’s able to do so, he will give it a try. Recently, a customer wanted Ice Mountain sparkling spring water, so he ordered it. Another customer requested a new brand of iodized salt, so he got it in.

“David does an excellent job with produce,” Gray said of Trollinger, the produce manager.

The store also tries to buy local produce as much as possible, and in the summer carried Dan Dixon’s corn and Peach Mountain tomatoes and basil, among other items.

When the store remodeled several years ago, it expanded its produce section and upgraded its ability to keep vegetables fresh. The store also expanded the vegetarian foods section next to produce with products such as hummus, natural juices and vegetarian brands like ToFurkey.

The deli has also expanded its offerings in recent years, due to more customers looking for prepared foods. Now 10 people work in the deli full and part time, with  the morning shift doing the cooking —  Gray uses family recipes for the potato salad and meat loaf, among other items — and the evening shift cleaning up and preparing sandwiches for the next day.

The meat department is another point of pride for Gray. While many stores get their meats already packaged from distribution centers, he employs two full-time meat cutters who cut the meat and package it in the store, making the meat fresher for the consumer.

As well as responding to customer requests, Gray is known for being a soft touch when it comes to helping local causes. He regularly donates food for school and church functions, and sometimes makes cash donations. While he turns down callers from out of town, he tries to say yes when the request comes from Yellow Springs.

While the Kroger Marketplace competition has made an impact, the store is holding its own.

“Business is down a bit, sales are down, but we’re still okay,” he said.

But if things get much worse, Gray will have to lay people off, and he dreads this possibility. He currently employs about 30 full- and part-time people, which makes the store one of the largest employers in the village. And many of his employees have worked at the store for decades — in produce, Trollinger has been at the store almost 40 years, while Allen has been there almost 30.

Asked about the longevity of his employees, Gray said he tries to keep in mind not only the needs of his customers, but also those of his workers. On holidays, for instance, rather than assigning people to work, he asks for volunteers, then he and his wife, Evelyn, work too, with Evelyn making cake for special occasions like Christmas.

“People like their jobs,” he said. “We try to be family oriented.

And if employees are happy, then customers will be happy too, Gray believes.

“It’s important that when someone comes in the door, they see a smiling face,” he said. “And a smile should be the last thing they see when someone carries out their bags. That’s an important part of our business.”

On a recent day, villager Jim Spangler was one longtime Tom’s shopper who expressed his appreciation for Tom’s Market.

“Tom does a great job recognizing what people want,” he said. “And the convenience of having it here — for a small town, it’s an incredible market.”

One Response to “A tiny market, holding its own”