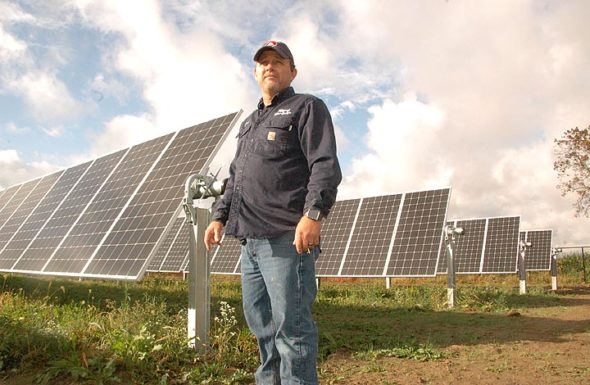 Johnnie Burns, superintendent of Village Electric and Water Distribution, stood before the new 1-megawatt solar array on the Village-owned Glass Farm as it turned sunlight into electricity for use in local homes. The Village will purchase power from the array, which is owned and operated by AEP Onsite Partners. A public ribbon-cutting celebrating the project and the Village reaching 93 percent renewable energy will take place Wednesday, Nov. 1, at 1 p.m. (Photo by Megan Bachman)

Rows of shiny new solar panels on the Glass Farm are the latest and most visible symbol of the Village of Yellow Springs’ commitment to green energy.

The 1-megawatt solar array, now up and running on the Village-owned property, brings the share of renewable energy in the Village’s electricity portfolio to 93 percent.

“The more self-reliant we can be, the better,” MacQueen added.

A ribbon-cutting ceremony for the new array — and a celebration of the Village’s renewable energy efforts — will be Wednesday, Nov. 1, at 1 p.m. The site can be accessed off of King Street or Ridgecrest Drive, and villagers are encouraged to park in the surrounding area and walk in, or follow signs for parking.

The Village has been trying to bring solar to the Glass Farm since 2011, ultimately contracting last year with AEP Onsite Partners, a division of American Electric Power, to install and maintain the array on 6.25 acres at the property’s southwestern corner.

According to the agreement, 3,024 panels, which mechanically move to track the sun throughout the day, will generate an estimated 1,441,800 kilowatt-hours in the first year, about 4.2 percent of total village use.

The Village’s electricity portfolio already includes contracts with hydropower, wind and landfill gas located outside the village, according to Energy Board Chair Rick Walkey this week. But generating the energy locally makes this project new and different, and could save the Village hundreds of thousands of dollars per year — savings which could be passed on to electricity customers, he said.

First off, transmission losses, which occur when electricity has to travel long over electric lines, are reduced, along with transmission costs. More significantly, because solar panels produce the most electricity on days when electricity is in greatest demand — hot, summer days when air conditioners are cranked up — the Village could drastically cuts its peak energy use, Walkey explained.

On those days of peak use, the solar array will produce closer to 10 percent of the Village’s needs, Walkey said, cutting the amount the Village needs to buy on the market at higher peak rates.

Village Electric and Water Distribution Superintendent Johnnie Burns explained it this way: The Village buys up to seven percent of its energy from utility DP&L on the open market. That cost is determined based upon how much the village uses at its very peak — last year topping out on Aug. 11 at 8.27 megawatts, according to Burns. But since the solar array is “behind the meter” for DP&L, it will directly lower the amount the village uses on that day. In that way, the solar array could have a significant impact on annual market purchases.

“On the worst day of electricity use in the region, they have to have the resources available [to meet demand], and there’s a charge associated with that,” Walkey explained. “What this array will do for us is reduce our use by about 10 percent on that day — which is significant.”

Last year, by urging villagers to reduce their electricity use on certain days — called “peak shaving” — the Village saved $300,000 in its market costs, Walkey said. The solar array will likely save the village that much each year, with further cost savings due to peak shaving.

The panels are also good for the planet, Walkey said. This is the first project in which the Village has actually added new green energy to the grid rather than buying into a project that would be built anyway, “and that’s a good thing,” Walkey said.

Burns agrees, and additionally believes it is valuable for solar to be generated locally so villagers can know where their power comes from.

“You can go out, see the sun shining on it, and it’s a clean way of getting power,” Burns said. “And we have control of it right here.”

Spearheading the effort were Bates and Burns, who have been working on the project since 2014. Working with Council, the Energy Board and energy consultant John Courtney, they planned the scope of the project, sent out a Request for Proposal and reviewed submissions with the Energy Board. Ultimately, AEP was chosen because of both low cost and reliability, Walkey said. Burns was particularly impressed with the AEP’s tracking array, which starts the day facing east and ends facing west.

With the exception of a $20,000 Village outlay to run a high voltage line from the Village distribution lines on Yellow Springs-Fairfield Road to the array, AEP covered all of upfront costs and raised their own money for the project, according to Bates.

Currently around 25 local customers already get credit for the electricity they produce from solar panels on their property under net metering agreements with the Village, Burns said.

With Council once again considering housing at the Glass Farm, the site could soon host a variety of uses reflecting Council priorities — affordable housing, green energy and land conservation. MacQueen sees the property as a balance of several village needs.

“This way, doing housing, solar, wetlands, a prairie and whatever else we do here as a community, makes it into a more holistic development,” MacQueen said.

Since the Village purchased the 43-acre Glass Farm from Bob Baldwin Sr. in the late 1970s, it has largely remained untouched, according to MacQueen at a recent Council meeting.

In 2004 a detention basin was installed on the far eastern portion of the property, followed by a change in zoning for the eastern third of the property to Conservation at the request of neighbors, according to News articles. Several years ago, a wetland area was created when the Village worked to accommodate dams that local beavers had built. This year, a conservation easement was placed on the wetland area — about eight acres — which manages storm water while providing habitat for plant and animal species and recreation for villagers. The remainder of the property, around 23 acres, is zoned Residential, according the Greene County planning document. Of the remaining 30 acres on the property, MacQueen estimates 20 to 25 acres could be available for housing