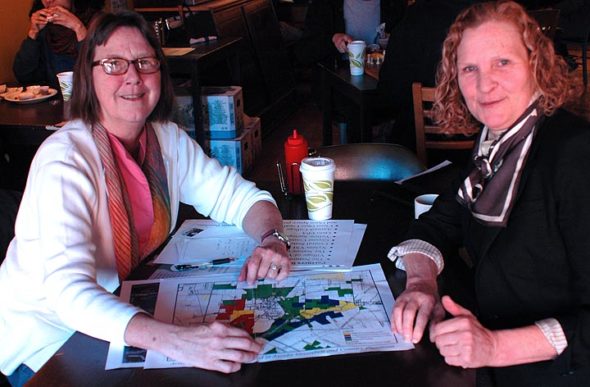 Two conferences’ ‘down to earth’ topics

Liken them to lichen. Two local nonprofits, akin to how algae and fungi form that symbiotic organism, are working in mutually beneficial ways to transform the local food and farming scene.

It was one year ago that the Tecumseh Land Trust partnered with the Arthur Morgan Institute for Community Solutions for the purchase at auction of a 128-acre property along the Jacoby Creek now known as Agraria. The land, when preserved, will help the land trust complete the Jacoby Greenbelt, and is where Community Solutions will explore and showcase the regenerative farming practices it has touted.

In their next synergistic effort, the two groups are hosting back-to-back day-long conferences on land conservation and regenerative agriculture, Thursday–Friday, March 8–9, at McGregor Hall, Antioch College.

The conference collaboration fits well with the land trust’s new push to promote conservation practices on the 28,000 acres it has preserved in Greene and Clark counties, according to its executive director, Krista Magaw.

“We have a bumper sticker that says ‘asphalt is the last crop,’ but beyond that we are looking for better conservation practices on the land that we already have preserved,” Magaw said.

For Community Solutions, the funding issue was not only crucial for acquiring Agraria, envisioned as a place for research, education and training in regenerative land use practices, but is important to help farmers transition from conventional agriculture, according to its executive director, Susan Jennings.

“I don’t think it’s fair to ask farmers to bear the economic brunt of changing the food system,” Jennings said. “We need to be partners in it.”

Supported by grants from the Yellow Springs Community Foundation and the Dayton Foundation, Conservation Funding 2.0 will highlight ways to finance conservation, work with lenders and foundations and partner for landscape-scale conservation, according to a flyer. Magaw said the event is for those who want to learn “creative and new ways of funding conservation acquisitions, to buy land or easements or to pay for your conservation.”

Regenerating Landscapes will feature information on regenerative soil practices that “build healthy ecosystems, increase resilience to drought and pests, improve productivity, counter climate change and enhance environmental and human health,” according to a flyer. Jennings defined regenerative land use as “any land use that builds organic matter in soil,” and includes practices like cover cropping, planting perennials and applying biochar.

“Organic is not enough,” Jennings said. “We need to be looking at other practices, not just getting rid of chemicals.”

The cost to attend both events, which run from 9:30 a.m. to about 5 p.m. is $50, with discounts available for low-income individuals. Attendees can also come for a stand-alone talk and are not required to RSVP.

‘Heart of the greenbelt’

Since it was founded in 1990, the Tecumseh Land Trust has worked to permanently preserve area farmland in collaboration with land owners, who receive money in exchange for development rights on their property.

“It’s a unique tool,” Magaw said of such conservation easements. “While mineral rights are sold out from land, this is a tool to achieve the opposite effect — to keep the land intact.”

But the vision for a greenbelt around Yellow Springs predates the land trust. Village Council first proposed a greenbelt in the 1960s, although it wasn’t until 1999 at the Whitehall Farm auction that it started to become a reality, according to Magaw. And after those 900 acres were preserved to the north, and the 1,000 acres of the Glen Helen Nature Preserve were preserved to the east in 2015, the “western gateway” remains the area most vulnerable to residential development, especially with the I-675 corridor in that direction, according to Magaw.

While the Whitehall Farm auction “kicked up” the efforts to preserve properties in the greenbelt, the auction of the Arnovitz family farm that led to Agraria “just lit a fire to finishing up the greenbelt,” Magaw said.

After last March, when Community Solutions purchased the Agraria parcel — what Magaw called the “heart of the greenbelt” — for $720,000, the land trust applied for, and received, a $1.4 million grant for its Jacoby Partnership, centered on the Jacoby Creek that runs along the western border and through Agraria. The money will be used for conservation easements — not including the 80 acres being preserved at Agraria — to fund conservation practices and to provide technical assistance to farmers. Community Solutions is also serving as one of the partnership’s demonstration sites. About nine properties are left to preserve in the Jacoby greenbelt, or around 2,000 acres, according to Magaw.

“When people hear about the Jacoby greenbelt they figure it’s preserved,” Magaw said, although the “much hoped for greenbelt” is taking shape.

An expert at leveraging funds for land preservation from federal and state agencies (the Jacoby Partnership is with four such agencies), along with local governments, private donors and foundations, the land trust will be sharing its successful strategies to land trust colleagues and area policymakers at Conservation Funding 2.0. In fact, two people from the national Conservation Fund are traveling from Arlington, Va., to present, Magaw said, a testament to the respect many have for the Tecumseh Land Trust, which helped Clark County preserve more farmland than any other county in the state.

“What we’ve done is highly valued in the farm community,” Magaw said.

Other speakers are from the Ohio EPA’s Water Resource Restoration Sponsorship Program, the Nature Conservancy, the Hamilton County Community Foundation and Jennings, who will proffer the vision of regenerative agriculture to the conservation community.

Community Solutions has more recently ventured seriously into the areas of food and farming, after Jennings came to head the group in 2014 and re-focus its mission on resiliency in the face of climate change, although the 78-year-old nonprofit founded by Arthur Morgan has long promoted community-based solutions such as local agriculture. This is Community Solutions’ second annual conference specifically on soil, which in recent years has become an “important piece of the international climate change conversation,” Jennings said.

“If we use regenerative land use tactics, we could sequester not only current carbon emissions, but start to chip away at historical carbon,” Jennings said, citing recent research from the Rodale Institute. “[Land use] is as important a climate tool as renewable energy.”

This year’s event features a permacultrist, a biodynamic gardener, a carbon farmer, a natural landscaper, an expert on indigenous landscapes, a statewide organic farming policy wonk and a stream mitigation expert from the Nature Conservancy, which is restoring about 50 acres along the Jacoby Creek at Agraria. The event will cover solutions at multiple scales, from composting in one’s backyard up to pushing new state policy. Magaw is also speaking, bringing strategies for helping farmers access land.

“Most people don’t understand that most farmland is rented,” Magaw said. “Some of our landowners with preserved farms want to see something different and would love to hear from an experienced organic farmer.”

A vision in sync

This first session at the first conference will feature Magaw, Jennings and Sandy Hollenberg of the Yellow Springs Federal Credit Union. The women will share the story of Agraria, whose genesis was last year’s Community Solution soils conference. Magaw showed up at the event to “sound alarm bells” about the upcoming farm auction, she said, which happened to coincide with Community Solutions’ desire to put its ideas into practice.

“We were thinking about what kind of small-scale on-the-ground project we can undertake,” Jennings said. “This was not small scale, but it was very serendipitous.”

Also figuring into the Agraria story is how all the pieces came together to preserve the property, from the Village of Yellow Springs committing Greenspace Funds and the land trust pledging money from its 1% for Greenspace program — together totaling $112,000 — to the local and outside individuals and groups who linked their credit union deposits to a line of credit for Community Solutions, to the educational seminar that the land trust ran for bidders.

“We wouldn’t be at Agraria without [the land trust] and Krista,” Jennings said.

Both Magaw and Jennings want to strengthen the local food economy. However, they acknowledge many interrelated hurdles, from training enough organic farmers to connecting them with existing landowners. Equally important is tackling the challenge of the market, which is currently dominated by large national chains that don’t source much food locally, they said.

“It’s an edging up of all of the different factors.”

The reporter is a former outreach director for Community Solutions.