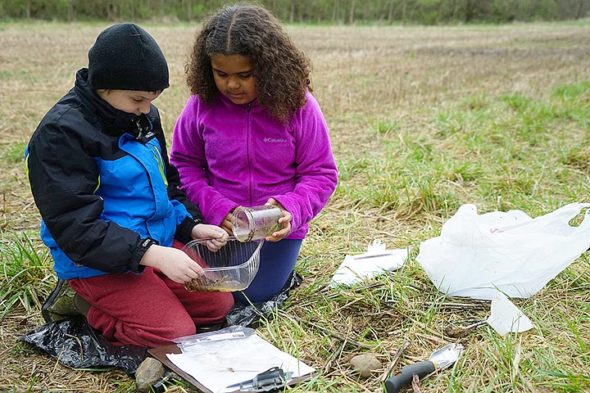 New grants for Agraria —  Kids get the dirt on soil education

The architect and inventor Buckminster Fuller often used a metaphor to illustrate how small targeted actions can move massive systems. Fuller noted that the “trim tab,” a tiny mechanism of a ship’s rudder, can change the ship’s course with a minute movement.

At the Agraria Center for Regenerative Agriculture, soil is seen as the “trim tab,” according to Susan Jennings, executive director of Community Solutions.

“We are thinking of soil as the leverage point,” Jennings said last week. After all, soil health affects everything from water quality to climate change to human health, she said.

To spread its work on soil restoration and sustainable agriculture, Community Solutions recently received several grants for educational initiatives at Agraria, its 128-acre farm just west of the village.

Last month, the nonprofit won a $50,000 Ohio EPA grant to educate K-12 students in Yellow Springs, Xenia and Springfield — and their teachers — for its Soils for Life project. That’s in addition to an earlier $50,000 grant from the Dayton Foundation and $2,500 from the Greater Dayton Conservation Fund, also directed to educational initiatives at Agraria.

The grant money will be used for teacher training, class field trips and new equipment such as soil testing kits, rain gear and more.

The benefits of Soil for Life are twofold, according to Jennings. Not only will Community Solutions share some of the latest research on soil science and regenerative agriculture with a receptive audience, but the students and teachers — otherwise known as citizen scientists — can help document the soil regeneration activities at Agraria.

It’s not a hard sell to local youth, according to Jennings.

“Kids are really into digging in the dirt,” she said.

Local teachers are equally excited for the partnership, Jennings said.

“Yellow Springs teachers really want to develop their own curricula,” she said.

For other teachers, ready-made curricula and buckets filled with materials for loan will also help them bring soil science to life in the classroom, according to Jennings. 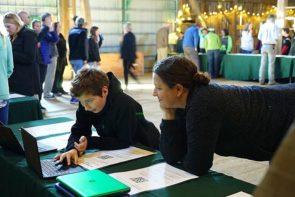 McKinney 7th-grader Otto Cipollini showed his mother, Kendra, his water quality findings from tests on the Jacoby Creek and Little Miami River during the Into The Wild exhibition night held at the Agraria Barn last month. (Submitted photo by Amy Harper)

Yellow Springs Schools directly benefit not just by having a farm nearby for local “field studies” — transportation to which is covered by the grant — but also because several local teachers will be paid to train teachers from Clark and Greene counties during a  two-day workshop next June, according to the grant proposal.

Morgan, reached by email this week, wrote that the district appreciates Agraria because of the opportunity to “connect to a community endeavor,” which is a core idea in project-based learning.

Students, meanwhile, can “explore, investigate, develop questions and solve problems about natural resources, agronomy, health of soil, water, and air,” Morgan added. To them, it’s nice to get out in nature.

“The students are very excited to be part of science studies that are not restricted to an indoor lab,” Morgan wrote.

School District Superintendent Mario Basora also commented on the partnership with Agraria in an email this week.

“Community Solutions has been one of our closest partners in student learning through Project Based Learning initiatives for the last five years,” he wrote, congratulating the group on a grant that will “help educate students all over Ohio in regenerative and sustainable agriculture.”

Having purchased the Agraria property at auction for $655,000 in 2017, Community Solution is partnering with the Nature Conservancy, the Tecumseh Land Trust and local farmers to restore healthy soils, waterways and ecosystems and model agricultural practices that produce healthy food while enhancing the natural habitat.

Soil is the crux of biodiversity at the property, explained David Diamond, Community Solutions media and education coordinator, in part because it hosts mycorrhizal fungi that new research is finding are key to communication between plants and their environment

“There is a symbiotic dance between the soil and the roots,” Jennings explained of the latest findings.

Although soil science is included in state-mandated science standards, Community Solutions can help bring the latest research into the classroom, according to Jennings.

“There so much new research — that’s why we think this will be transformational,” Jennings said.

Climate change is another impetus for restoring soils worldwide, and locally, Diamond said. Agriculture contributes up to 30 percent of global greenhouse gas emissions, while most of the total greenhouse gases that have accumulated in the atmosphere since the beginning of civilization are tied to agricultural practices, he said.

“It goes back to Ancient Egypt and Mesopotamia, but obviously more recently as well,” Diamond said.

Furthermore, atmospheric carbon dioxide can be sequestered in soils as carbon to reduce the greenhouse gases responsible for global warming, Diamond explained.

Although the Soils for Life project won’t start until 2019, Agraria is already becoming a hub of education for area youth and adults.

Last school year, Mills Lawn third- graders participated in a “Digging Deeper” project-based learning unit to learn about soils in order to become “soil stewards,” according to the curriculum developed by Peg Morgan. In total, 42 students visited Agraria four times in the spring, using insect counts and decomposition rates to measure Agraria’s soil health. In addition, seventh-graders did a macro-invertebrate study of Jacoby Creek. Over the summer, Yellow Springs Montessori students spent two days a week in an outdoor classroom space at the farm. And this fall, Agraria was the site of the seventh-grade class’ Into the Wild exhibition and for an Antioch College Ecosystem Ecology course.

Since buying the Agraria farm more than two years ago, Community Solutions has already begun to witness a transformation of the property, which was conventionally farmed for decades. After removing some of the invasive plants, planting cover crops, eschewing chemical pesticides and fertilizers and using no-till practices, the participants are seeing insects, butterflies, birds and soil quality improving.

The opportunities for education at Agraria are tremendous, but more help is needed to fulfill the group’s mission, according to Jennings.

“We’d love to have school buses out here everyday, but we don’t have the necessary support to meet them,” Jennings said.

In response, Community Solutions is organizing a group of local volunteers interested in helping youth education at Agraria. To sign up, email Diamond at daviddiamond@communitysolution.org.

In the end, the students themselves may be the “trim tabs” that move a mammoth industrial agricultural system toward sustainability as they become, in the grant proposal’s words, “a new generation of farmers.”

*The author is a former outreach director for Community Solutions.