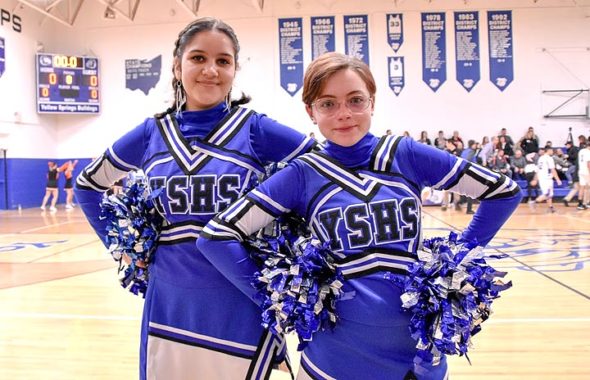 Squad cheering ‘for all girls’

A longstanding athletic tradition has been toppled this year at Yellow Springs High School, and with it a previously accepted social norm has been challenged and sent packing.

The new normal: the cheerleading squad is now cheering for girls home basketball games, as well as all boys games.

The move was past due, according to district Superintendent Mario Basora.

“The issue there is related to gender equity,” Basora said last week. “If it’s just the cheerleaders cheering on the boys and not the girls, is that something we want to support as a school district? I don’t think so.”

New cheerleading coach Naomi Hyatt agrees. The Mills Lawn intervention specialist was one of several people pressing for the change this year.

“I really want to make this work,” Hyatt said during the varsity girls basketball team’s home game earlier this week.

It’s about “equity in sports,” she said.

And at cheerleading tryouts this fall, squad hopefuls were told “this is nonnegotiable,” Hyatt said.

Cheerleaders interviewed last week said that they had some misgivings before the first girls home game Monday, Dec. 3.

“At first the cheerleaders were a bit resistant,” senior Kayla Brown said.

A major concern was the opinion of the girls basketball team.

“We heard that the girls didn’t want us there,” Brown said.

District administrators got wind of the potential conflict between the two groups and brought them together for a pizza lunch to talk out their concerns before the first home game.

The gathering was helpful in calming fears, coach Hyatt said. They recognized their mutual interests in representing the school and supporting each other.

“This is a great group for talking things through,” she said.

And the player feedback after that first game shored up the cheerleaders’ morale.

“We heard back that it helped them actually,” Brown said. “It boosted their confidence.”

Player Chanel Phillips, a junior who is also on the cheer squad when not playing basketball, told the cheerleaders that their presence “felt really uplifting.”

But the cheerleaders had other concerns as well.

Scheduling was a big worry. Already practicing three times a week and performing at all boys games, the cheer squad wondered about the time commitment involved in adding girls games to their calendar. The decision to cheer only for the girls home games this introductory year addresses that concern, Superintendent Basora said. District leaders hope to include away games in the future, with junior varsity squad members getting more opportunities to cheer at varsity games.

Senior Hailey Qualls, for one, feels that the additional games help strengthen the squad.

“Every game is another full-out practice,” she said. “Each time you perform, you’re better.”

Cassie Kludt, a junior, said she welcomes the tougher schedule.

While Qualls has come to see the change as positive, she said she wasn’t as enthusiastic at first.

“The other three seniors [and I] were concerned about so much change our last year,” she said

She was particularly worried about how other students and the community would react.

“I thought it was going to be terrible, and that people were going to talk about us … judge us,” Qualls said.

Anna Millar, a sophomore, said she was also concerned about how the change would be perceived.

She anticipated hearing that “cheerleaders are just there to look pretty,” so why would they be at girls games, a stereotype she soundly rejects.

“People stereotype us as not being athletic at all,” she said. “They think of us as being lesser.”

The positive feedback after the first game was a relief.

“That was really nice,” Qualls said. “They showed us as much support as we show them.”

Making a big change of any kind can be daunting, the cheerleaders agree.

“I think a lot of people are afraid of changing things,” Millar said.

In breaking a long-held athletic tradition, Yellow Springs has taken a rare step, with few schools in the country having established anything like it. Certainly, no other schools in their local conference have a similar standard.

The result is that they are the lone cheer squad on the girls team court.

Kayla Brown said the absence of another squad was initially awkward.

“There’s kind of a competition” between the two squads, Brown said. “Who’s louder, who has more spirit. So it was weird to do it without other cheerleaders.”

The cheerleaders said they got over the awkwardness by directing their energy to the Yellow Springs team and the fans in the stands.

And they realized that they could help change the dynamic of the girls games, where the smaller crowds are often quiet.

“I heard that some people didn’t go [to the girls’ games] because it was so quiet,” Millar said. “It’s fun to be loud.”

They’re getting support from other students, including players on the boys varsity and junior varsity teams, who have been regularly attending the girls home games.

“I feel like anybody should be supported no matter the gender,” he said during a break in Monday night’s game.

“It definitely makes the games a lot of fun,” Anderson said.

“I actually asked last year about why they only cheered for the boys,” Shires said. “I think it’s good how it’s both [now].”

For their part, the cheerleaders have noticed that the crowds for the girls games have grown larger.

“Ever since we’ve cheered for the girls, there are more students in the student section supporting our Lady Bulldogs,” Kludt said.

The energy goes both ways, said junior Krista Romohr, who was co-captain of the JV cheer squad last year.

“I really like going out there and giving positive energy toward the crowd, and then getting that back,” Romohr said.

Now the girls team is getting the same thing as the boys, what Qualls described as her favorite game moment: “That moment coming out, and the music starts playing, and the crowd goes wild,” she said. “It makes the whole school come together and sets the tone for the whole night.”

Another benefit of the cheer squad’s presence, Qualls added, is that “it kind of distracts the other team, kind of messes with their heads.”

The other teams aren’t prepared to have a cheer squad on the court, local squad members said.

They said they’ve received some negative looks and grumblings from opposing schools, but the girls are okay with that. They hope the other teams go back to their home schools and seek support from their own cheer squads.

“The whole cheer thing with the girls is going to change people’s minds,” she said.

The cheerleaders said they’re enjoying the role of change-makers, while also representing what they see as a Yellow Springs ethic.

“Yellow Springs culture is always eager to break the trend and move forward,” he said this week. Regardless of what’s “traditionally expected,” the important question is “what’s the right thing to do.”

This is the right thing to do, district administrators agree, noting that the cheer squad change is part of the district’s wider gender equity initiatives.

“It’s taking everything being learned and putting it into practice.”

The cheerleaders get that.

“In a way, cheering without other cheerleaders there is not only cheering for our girls, but for all girls, Romohr said.