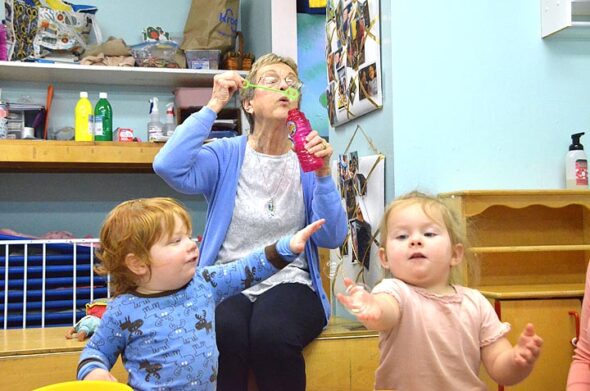 Celebratory red balloons and a banner inside the welcome area at the Yellow Springs Children’s Center announce the good news: the center has been newly designated a five-star child-care facility by the state.

The local facility previously had one star, which it briefly lost during a turbulent time in the center’s history about five years ago.

Doster, who came to the Children’s Center from a facility in Fairborn in 2017, said she had no doubts that the Yellow Springs facility could qualify for the top rating in its practices, but those practices needed better documentation.

“We’re doing it, we just needed numbers to be put on paper,” she said.

The rating system’s areas of focus include age-appropriate curriculum, lesson plans, teacher training, classroom assessments, the number and types of toys available, diversity in the classrooms and the engagement between care providers and children.

“Engagement is key,” Doster said, as a walk through several classrooms showed teachers on the floor with the youngest children or working alongside older students on various projects. Yoga was one of the activities on the afternoon schedule during a recent visit, with the youngsters mimicking the simple movements of the instructor.

Doster noted that each student has an individual plan and portfolio, and as the children near kindergarten age, the center works with local kindergarten teachers to make certain the students are ready to enter primary school. The school partnership helps smooth the transition, the director said.

That transition is part of what led Rhyan and Brandon Jones to enroll their 2-year-old, Parker, earlier this year.

While the young family lives in Wilberforce, Parker’s parents want to see her attend school in Yellow Springs, where Rhyan grew up and her family goes back eight generations.

“Parker is the great-granddaughter of [former police Chief] James McKee, her mother noted after a visit to the center this week. 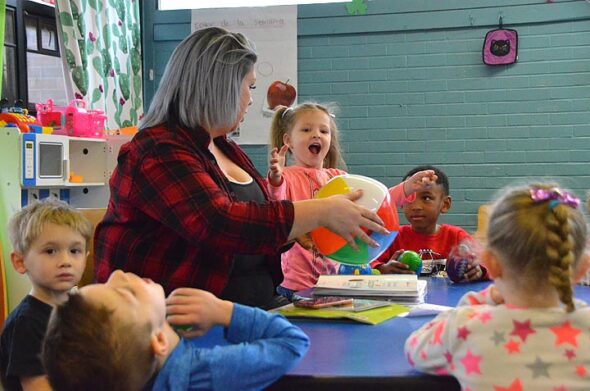 The parents said they have been very pleased with the care Parker is receiving at the Children’s Center.

After spending some time reading with their daughter in the toddler classroom, they met with one of Parker’s teachers to talk about her individual plan.

“I’ve seen such a change with her” from her pervious care provider, the mother added.

Parental involvement is important, Doster said, and parents are always welcome. Community members, too, are invited to visit and volunteer.

“I just love it,” she said this week.

After spending her working career with teenagers, Szulewski said the young children bring her unexpected delight.

“I have a million stories,” she said of her interactions with the little ones.

Opening as the Community Nursery School in 1926 and incorporating as the Yellow Springs Children’s Center 20 years later, the center now draws students from across Greene and Clark counties, with families coming from Springfield, Enon, Xenia, Fairborn and New Carlisle, Doster said. 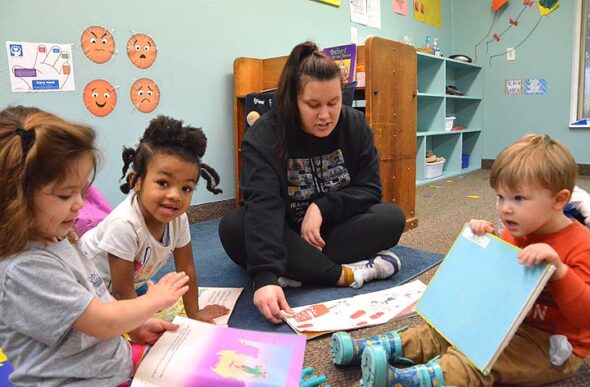 Toddler classroom teacher Heather Ratliff read stories this week to a squirmy group of little ones, including, from left, Mariana Reyes, Lily Maddox and Arthur Hall, at the Yellow Springs Community Children’s Center. The center learned last week that it has been awarded a five-star — the highest — rating by the state. Staff plan to host a celebration on Saturday, March 14, from 10:30 a.m. to noon, at the facility at 320 Corry Street. (Photo by Carol Simmons)

“Some parents drive through (on their way to work); some work in the village,” she said.

Current enrollment is 84, with 15% of those students from the after-school care program.

That program, a partnership with Mills Lawn School that originally met in the school’s gym, has been located at the Children’s Center for the past two years. A Yellow Springs school bus brings the older children over each afternoon. The center also provides care for the school-age children, up to 12 years of age, on school holidays and breaks, as well as in the mornings when school starts late. A summer program provides day-long care.

The infant room was added last year, and a new pre-school classroom is set to open by the beginning of April.

“We already have 10 kids enrolled,” she said.

The center has a gym, also called the “muscle room,” which features a thickly padded floor; and a full kitchen, where an onsite cook prepares breakfast, snacks and lunch for the children.

As an institution, “we believe in being outside, promoting creativity, bringing the family in, creating a nurturing environment.”

She said the center’s philosophy also promotes “continuous training” for its staff through conferences, online training and working with the Greene County Educational Services Center, which provides direct teacher training.

Just as the students have their individual educational plan, “each teacher has a professional development plan,” Doster said.

A renewal for the center

The five-star rating marks a significant renewal at the center over the past five years. According to a 2015 News article, enrollment in the pre-school and early childhood programs had dropped to a low of 13 students that year and a number of staff members had left. The facility also went through three directors in two-year’s time.

To mark this milestone, the staff is planning a community celebration for Saturday, March 14, from 10:30 a.m. to noon, at the center on Corry Street.

Doster said she hopes alumni will come and join in the festivities as well.

At the same time, she’s also looking to the future. She said immediate goals include replacing the playground fence and installing air conditioning in the older student wing.

“It gets hot there in the summer,” she said.

She also would like to see enrollment continue to grow, and envisions eventually adding a new wing to the building.

The state’s five stars affirms the quality of care and instruction at the center, Doster said, and she’s excited about “spreading the word.”