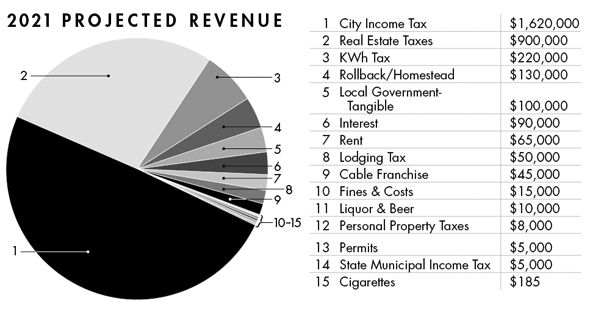 Municipal revenues have been declining in recent years, and were hard hit by the COVID-19 pandemic in 2020. Revenues this year are projected to be down 13% from 2019, largely due to lower income tax receipts. Next year, the Village expects to collect $3.27 million in general fund revenue, while it is set to spend $4.23 million. (Chart data from Village of Yellow Springs)

The Village of Yellow Springs plans to spend about a million dollars more than it takes in next year. As a result, general fund reserves are set to drop to their lowest level in recent years.

But the spending increase is intentional, Village leaders said at Council’s Dec. 7 regular meeting, where the first reading of the proposed deficit budget took place.

“I’m aware of the anxiety that people have over the general fund,” Village Manager Josué Salmerón said at the start of budget discussions.

“Those expenditures have been intentional,” he added. “There have been reserve balances that have accumulated over the years and the government has decided to make investments.”

Next year, general fund spending — which covers streets, parks, police and most administrative costs — is budgeted at $4.23 million, while revenue is projected at $3.27 million.

The $965,421 shortfall would draw down municipal general fund reserves to $1.28 million. Over the last three years, the reserve has averaged $2.34 million.

A deficit budget is not a new phenomenon, Salmerón said. The Village has run annual deficits in four of its last eight years.

“It’s not uncommon to dip into the reserves,” he said in a later interview.

However, in the preceding three years, 2017–2019, the Village ended the year with a healthy surplus. In those years of lower spending and higher revenue, more than $1.5 million was added to the reserves.

Council President Brian Housh, meanwhile, emphasized at the meeting that the Village needs now to invest in infrastructure so that it can see boost the economy.

“If we stay stagnant, then nothing improves, then we may be in that ‘spend down’ scenario,” he said, referring to the possibility that the reserves are spent down entirely by 2022.

Council member Lisa Kreeger agreed with the need to invest.

“With the pandemic, there is a lot of uncertainty. But here in the Village, we are in the situation where we can’t afford to put the brakes on,” she said of municipal spending.

The Village did, however, trim some spending between earlier budget discussions in October and November and the most recent budget ordinance. The Village projects it will end 2021 with $1.28 million, about double its initial projections.

Still, Council member Laura Curliss was not comfortable with spending down the reserves to such a low level, and what that means for the Village’s future.

“We’ve been eating into the general fund reserves,” she said. “It seems like next year’s budget is the last year that that can happen.”

A public hearing is set for the budget’s second reading on Monday, Dec. 21.

Driving the spending increase are expenses for public safety.

“Police has received the most criticism because it is the largest item,” Salmerón said at the meeting. Including police pensions, public safety accounts for  42% of general fund spending.

But public safety is also a department where it’s difficult to control costs, according to Salmerón.

Staffing costs reflect several long-serving officers and a transition to a department of mostly full-time staff, he said.

“We have had little turnover, so we have higher wages,” Salmerón explained.

State law also limits how municipalities make changes to their police workforce. By law the most junior officers must be laid off first, while those officers are often the least expensive to employ, according to Salmerón. It’s one reason why the department can’t easily replace officers with social workers, as has been suggested by some villagers.

“It is a tough department to try to restructure,” Salmerón said in a later interview.

“This year, we have three items that are putting a lot of pressure on our public safety budget,” he said of those expenses.

Officer uniforms were last upgraded in 2013, and the new uniforms are an attempt to present a “more inviting” image, according to Salmerón.

In response to a question from Minerva Baker at a virtual town hall on the budget on Dec. 9, Salmerón said the YSPD was also looking into purchasing body cameras for its officers, at an estimated cost of $60,000 total. But it hopes to get a grant for that expense, which is not anticipated for 2021.

Another contributor to the deficit budget are shrinking revenues. Already in decline in recent years, Village’ revenues — mostly local and state taxes — took an extra hit in 2020 due to the COVID-19 pandemic, and are expected to remain depressed through at least the first quarter of 2021.

“We have lower revenues, but our cost hasn’t necessarily decreased. That’s not a good position to be in,” Salmerón said.

Next year the Village is looking to bring in $3.26 million, only slightly more than it expects to receive by the end of 2020, $3.16 million.

In total, the Village will see a loss of close to $400,000 due to COVID-related economic impacts.

“That’s an impact that we’re seeing from COVID and there is very little that we can do about that,” Salmerón said at the virtual town hall.

“If folks are not working, then they are not paying income tax,” Salmerón explained. “A lot of our businesses were affected by COVID and had a reduced workforce.”

Also affecting income tax receipts are more people working from home during the pandemic, he said.

Yellow Springs was especially vulnerable to the fallout from COVID-19 pandemic because of its reliance on a tourism-based economy, Salmerón added. As a result, the Village should focus on diversifying its economy.

“How do we build resilience in our local economy by having diverse businesses that don’t have a similar economic cycle?” he said.

Many workers also pay their income tax to other communities, he said, with Yellow Springs increasingly becoming a bedroom community. Striking more of a balance between property and income tax would help the Village’s revenues, he added.

Through efforts to grow the economy, Salmerón is hopeful the revenue situation will improve.

In recent months, the Village has met with several large employers, including Cresco, Antioch College and MVECA, to explore possibilities and offer support, according to Salmerón. The Village is also looking to bring more businesses to the Center for Business and Education, or CBE, at the northwest corner of Dayton-Yellow Springs and East Enon roads.

There is some good news. Cresco, a marijuana producer located in the CBE is set to add 50 jobs by the end of 2021, he said.

“That’s an improvement, it has helped our income tax this year,” Salmerón said of Cresco’s growth.

Village leaders are also hoping that infrastructure improvements will spur economic growth and that more grant funding will bolster the town’s bottom line, they said at the meeting.

Accordfing to the budget, the Village is set to spend $1.33 million on capital projects in 2021, up from close to $900,000 budgeted for the preceding two years.

The total Village budget for 2021 including its self-sustaining enterprises, is $14.28 million.

• Council unanimously passed the first reading of an ordinance targeting engine braking and other loud vehicle noises on village roads. The new law would prohibit engine braking, which some large tractor-trailers use to brake quickly, in addition to prohibiting operating a commercial vehicle “which causes excessive noise levels, as a result of a defective or modified exhaust system, including any muffler component.”

Salmerón said he has received some complaints from villagers about loud truck noises along U.S. 68. The township must pass a similar measure before the local ordinance can take effect, he added.

Village-owned vehicles and school buses are exempt. Those violating the measure could be fined a maximum $100, and audio or video evidence can be used as evidence without the need to abide by surveillance technology requirements, according to the ordinance.

• Council unanimously approved a one-time bonus to Village part- and full-time staff as part of a state redistribution of Bureau of Workers’ Compensation funds. The bonuses totalled $43,624, according to a fourth-quarter supplemental appropriation resolution. Full-time staff will take home a bonus of $1,000 and part-time employees a bonus of $500.

“We think it’s a great thing to do for our workforce,” Salmerón said.

• Housh shared an update on the Justice System Collaborative Committee, an informal advisory group that has been meeting since August. He said the group is working on a recommendation to decriminalize minor misdemeanors. Kreeger suggested the group become an official commission of Council in 2021 so it can benefit from “better supported project management” while continuing to host larger community meetings.

• In response to a letter from villager Dan Carrigan questioning the reasons for installing a flashing crosswalk sign at Xenia Avenue and Short Street, Village Public Works Director Johnnie Burns said the Village did so “for safety purposes” and reported that the flashers were “getting a lot of use.”

• At the end of the meeting, Council adjourned to executive session “for the purposes of investigating a complaint against a Village official.”