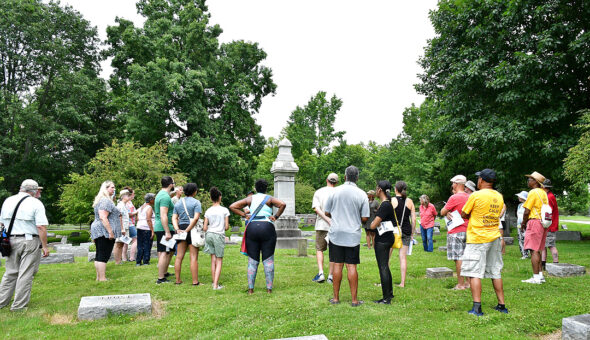 About 30 people attended a cemetery tour on Saturday, July 24, featuring the stories of the Black villagers who are buried there. (Photo by Kathleen Galarza)

On Saturday, July 24, people slowly trickled into Glen Forest cemetery, lingering near the cannon commemorating the service of veterans during the Civil War, including Black soldiers who are buried in the cemetery.

The cannon served as the launching spot of The 365 Project’s “African American History of Glen Forest Cemetery” tour, during which about 30 people were led through the cemetery by student guides Gini Meekin, a rising high school freshman; and Griffin Roberts, a recent YSHS graduate.

Participants visited individual graves and family plots of African American residents who made important contributions to the village, including Omar Robinson, a Tuskegee Airman and Wright-Patterson Air Force Base engineer who died in 1996. Robinson’s Omar Park Estates established a predominantly Black neighborhood of 50 homes in the 1950s.

This year, sponsorship from local businesses has allowed The 365 Project to offer the tours for free to the public. The walking tours started in 2016 as an initiative to teach local middle and high school students about Black history in the village. The 365 Project trains students as tour guides, and the students then share the information they learned in the training with residents and visitors.

Although the African American population in Yellow Springs has seen a significant decrease from 26% in the 1970 to less than 12% as of 2010, there are descendants of Black families that arrived in Yellow Springs beginning in the mid 1800s who continue to live here, and whose ancestors are buried in the cemetery.

The tour guides addressed the reasons why the village was attractive to African Americans. 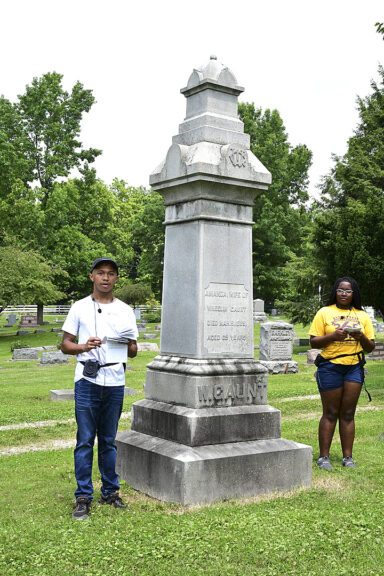 “Yellow Springs in particular became attractive to Black people in the mid-1800s because Ohio was a free state across the Ohio River from the slave state of Kentucky and the anti-slavery beliefs of the founders of Antioch College, which opened in 1853, may have influenced the village,” Roberts said.

“Yellow Springs was also attractive to African Americans nationally because of the founding of Wilberforce University as a college of the African American Episcopal Church (A.M.E.) in the 1860s. Wilberforce attracted Black scholars from across the country and made the area well known to Black people,” Meekin added.

The tour visited the grave of Isabel Adams Newman, who died in 2020. Newman was a descendent of the Conway Colony, a group of formerly enslaved people who arrived in Yellow Springs in the 1800s. She was a civil rights activist and a key organizer during the Gegner Barbershop protests in the 1960s. According to an article written by the News in 2011, the protests were part of “a 20-year effort to desegregate Yellow Springs, which escalated to the dramatic 1964 confrontation between police and protesters picketing Gegner’s shop.” One hundred people were arrested during the protest and it “thrust Yellow Springs into the national spotlight during the height of the civil rights movement.”

Wheeling Gaunt, a formerly enslaved local philanthropist, and his wife Amanda are buried in the cemetery. Gaunt, upon his death in 1894, bequeathed a sizable amount of land he owned in Yellow Springs to Wilberforce University according to his estate records.

According to tour guides, Glen Forest was originally a forest that was purchased by the Village from William Mills in 1873, although the first official burial in the cemetery occurred in 1857. In 1921, the Village Council transferred management of the cemetery to the Glen Forest Cemetery Association, which operated the cemetery until it disbanded in 2013 and transferred operational control to the Miami Township Trustees.

Unlike other cemeteries in the north and southern parts of the United States, the Glen Forest cemetery did not seem to restrict burials of African Americans, as families are interspersed at individual sites and on family plots throughout the grounds.

Interracial couples also reside in the cemetery, including the internationally renowned children’s author, Virginia Hamilton, who died in 2002, and her husband, Arnold Adoff, who died this year. Adoff was the publisher of the first children’s book featuring an interracial family, entitled “Black is Brown is Tan.”

Organized in 2008, The 365 Project is based in the Yellow Springs and Miami Township area. It is a nonprofit organization whose purpose is to “facilitate discussions regarding racial diversity in Yellow Springs/Miami township.”

A “Black Women of Yellow Springs” walking tour is planned for Aug. 14 at 1 p.m. The tour will begin at the Yellow Springs Community Library.