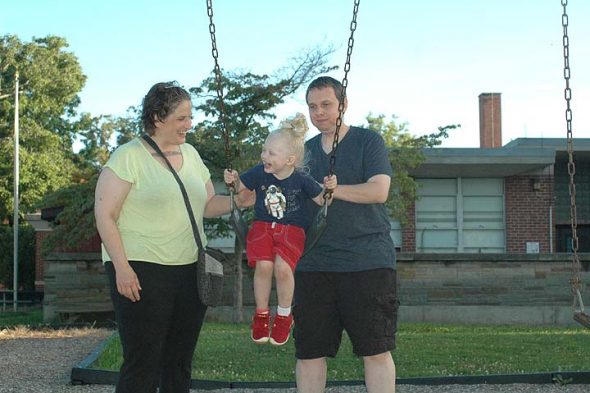 Villagers Tanya Maus and James Luckett romped with their son, August Frederick Townes, at the Mills Lawn playground on a recent evening. Maus and Luckett moved to Yellow Springs in 2013, and August was born six months later. This summer, the family put down permanent roots, buying a home through Home, Inc. (Photo by Audrey Hackett)

‘Nomads’ decide to settle down in Village

WHY YS?
This is the twelfth article in an occasional series looking at why people choose to live in Yellow Springs. If you have a story that fits our theme, feel free to contact us at ysnews@ysnews.com.

An artist and an academic move to Yellow Springs. They find people, jobs, a community they enjoy. They have a child. In a few years, they buy a house. They make plans for their little boy’s future. In short, they settle down, for the first time in their lives.

“We liked the people and community and environment right away. We liked our jobs. We like everything right now,” said James Luckett, a photographer and cook. “We feel really fortunate,” he said, wonderingly.

His wife, Tanya Maus, a historian, said she immediately felt at home in Yellow Springs, even before it was their home. “There’s a sense of belonging that I’ve not experienced before,” she said. She’s amazed, she said, that community of just 3,500 people can have such richness and depth.

“There are all these networks of people here that you can be a part of. It’s not New York or San Francisco … but there’s so much complexity in village life.”

Maus and Luckett moved to Yellow Springs in July of 2013. Then a professor of history and East Asian studies at Wittenberg University, Maus had been living in Springfield since 2007. But she found herself increasingly gravitating to Yellow Springs, frequently driving south to practice yoga at Yoga Springs (now closed). The women she came to know through the studio became “a community I felt richly connected to,” she said.

Luckett moved to Springfield, from Ann Arbor, Mich., in 2009 to live with Maus. They had been friends for many years, he said, and their friendship had burgeoned into a romance. The couple got married that year. A photographer and cook, Luckett began teaching at several area colleges and working at the Emporium. “With James’ job, we found ourselves coming to Yellow Springs more and more,” Maus said.

So they decided to move to the village. “It just felt comfortable,” Maus said. But finding housing was a feat. “We would follow every lead in the newspaper and call within an hour, but they all were taken,” she recalled. Five months into the process, their luck turned, and they rented a home on Allen Street.

Just six months after moving to Yellow Springs, their son was born. They gave the small boy a grand name, August Frederick Townes, after three of their artistic icons: playwright August Strindberg, photographer Frederick Sommer and singer-songwriter Townes Van Zandt. August is now two-and-a-half and a connoisseur of the village’s playgrounds, favoring those at Mills Lawn and Antioch School.

August recently started day care at the Yellow Springs Community Children’s Center, after the family tried a day care facility out of town. “It was a beautiful place, but he didn’t like it,” Maus said. By contrast, August “loves the Children’s Center,” she said. “It was as if he was telling us, we need to be in the community.”

Maus left her teaching position at Wittenberg University in 2014, and, the next year, became the director of Wilmington College’s Peace Resource Center, an archive of historical documents pertaining to the atomic bombing of Hiroshima and Nagasaki. The Center has a significant Yellow Springs connection: it was founded by Quaker activist Barbara Reynolds, wife of one-time Antioch College professor Earle Reynolds. Both husband and wife were active in gathering and disseminating information about the bombings after the war, Maus said.

The job fits well with Maus’ academic interests and personal commitments to peace and non-violence. She’s a scholar of modern Japanese history with a particular focus on people’s history, including experiences of poverty, childhood and war, having earned her Ph.D. from the University of Chicago in 2007. At Wittenberg, she taught courses on the atomic bombing. In addition to maintaining the Peace Resource Center’s scholarly archives, she also creates programming to promote Kingean non-violence and a culture of peace on campus and beyond. Last year, for example, to mark the 70th anniversary of the Hiroshima and Nagasaki bombings, she led a commemorative program at the college that included 12 hours of readings of survivor testimonies.

“I think I’ve always just intuitively understood the destructiveness of abuses of power, and that’s always informed” both her activism and choice of career, she reflected.

Maus grew up on a small family farm in Minnesota, went to college in Austin, Texas, and spent her graduate school years in Chicago. She’s also been to Japan several times, living there for a total of about four years as an exchange student and scholar.

That experience of Japan is something she holds in common with Luckett. A fellow nomad, he grew up in Washington state in several small communities around Seattle, went to graduate school in Arizona, then lived in Chicago and Tokyo with his then-wife, who was Japanese. While in Tokyo, he became proficient in Japanese home-style cooking — not restaurant-style sushi and tempura, but the simple rice, fish and vegetable dishes that Japanese moms and aunts make, he explained. He even opened a catering business providing home-style cooking to foreigners and Japanese who lacked the skills or experience to prepare such dishes.

He conceded that some in Japan viewed an American man preparing traditional food as a bit strange, but “people were grateful to have it.” With a wry smile, Luckett added, “I’ve always been an anachronism,” citing his training in analog photography and chemical darkrooms, as well as stints working in libraries shelving and managing physical collections of books.

Luckett is currently an adjunct professor of photography at Antioch College and a cook at the new Tables of Contents Café, part of Blue Jacket Books in Xenia. In his life, photography and food intertwine. “I’m always wanting to provide something to people,” he said, whether the medium is food or art.

These two callings strikingly coexist on his Instagram account, where hundreds of photographs of dishes he’s prepared commingle with desolate or darkly humorous streetscapes of Xenia near Blue Jacket Books and evocative pictures of his son, usually identified as “the young August Frederick Townes.” The images of August are not typical “cute kid” images, he said. Rather, they’re attempts to capture the boy as “a capable, fully grown, willful human being — an un-aged being, an eternal being.”

In all his photographic art, Luckett said he is trying to “make pictures of invisible things” to represent a feeling or mood. “The picture isn’t about what you’re seeing, it’s about what you’re feeling,” he said. Often these images have been melancholic, reflecting his temperament and his desire to make sad or darker experiences visible in a “success and positivity” world, he explained. The images of August are a departure from that sadder-toned work, reflecting his sense of being “more in balance” now that he’s a father.

And then there’s the joy of the new house. In late July, the family moved into a home they’ve already christened “the blue house,” a 1954 North High Street residence with one of the most capacious porches in Yellow Springs. Aided by affordable housing agency Home Inc., they are on the path to purchasing the home, their first. “There’s no way we could have bought a house in Yellow Springs without Home, Inc.,” Maus said.

The blue house has already rooted them more deeply in Yellow Springs. Right after they moved in, the family received a visit from Don Lewis, a son of the home’s builder, who was eager to reminisce about growing up there.

“He had so many fond memories,” Maus said. “It makes us feel good to know that we’re living in a home that was loved, that many happy things happened here.”