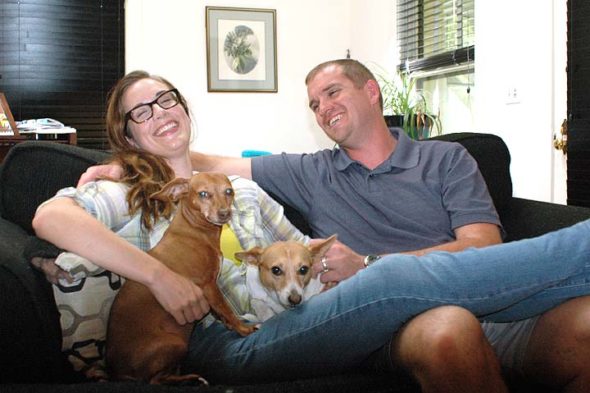 Dorothy Dean and Jarod Rogers moved to Yellow Springs in July of 2015, seeking to be closer to Rogers’ eight-year-old daughters, who live with their mother in Columbus. The couple are enjoying the trees and casual feeling in the neighborhood of their new home, where they relaxed with their dogs Sita and Dicey on a recent weekend. (Photo by Audrey Hackett)

They’re villagers, thanks to Google

WHY YS?
This is the fouteenth article in an
occasional series looking at why people choose to live in Yellow Springs.

A simple Google search brought Dorothy Dean and Jarod Rogers to Yellow Springs. “I literally Googled, ‘What is the most liberal town in Ohio?’” Dean recalled, laughing, in a recent interview.

It was the spring of 2015. The couple were looking to move from Nashville to Ohio to be closer to Rogers’ children, eight-year-old identical twins Anna and Sarah, who had relocated to Columbus with their mother. Dean, 32, had graduated from Oberlin, and was hoping to find another small, progressive college town. Google steered them to Yellow Springs, a town previously unknown to them.

A visit to the village a year ago June convinced them they could live here. Their first stop? The Corner Cone, whose vegan options delighted Dean. After walking around a bit, the village “just felt right” to them, Rogers said.

Less than two months later, they’d bought a house on the north side of town and moved in. From the living room of that home on a recent weekend, they said they were deeply pleased to be in Yellow Springs.

“All the trees,” said Dean. “I was so enchanted by all the trees all around.” And she likes the casualness of the village. “The tents in the backyard, the tree houses, the chickens roaming around — there’s so much spirit here,” she said.

Rogers shares that view. “It’s nice to be a little bit more free,” he said, referring to the looser way of living practiced by many Yellow Springers. “You can spend your entire life manicuring life and not spend a moment enjoying it,” he reflected.

The peace of their new surroundings belies a year of challenge and change. Rogers, 36, is a photographer and videographer who’s spent much of his career in TV news. He’s won regional Emmys and a regional Edward R. Murrow award for his work. He loves “anything with a human element,” he said, and is particularly proud of his storytelling around the lives of wounded veterans. “Telling stories about our men and women in the military is a particular passion of mine,” he said.

At the time the couple left Nashville, however, Rogers was working as a corporate multimedia specialist, and was ready for a change. Moving to Yellow Springs, he decided to break away from the corporate routine and launch his own videography business. That business, Immersion Media, has been gradually taking off, though he and Dean — who is a co-owner and active in aspects of the company — said they’d underestimated the difficulty of starting an entrepreneurial venture while also settling into a new town and home.

But taking on a bit too much is not unusual for the couple, who met online two-and-a-half years ago and quickly plunged into shared life. They are different but complementary, they said.

Rogers was born and raised in Tennessee, part of a farming family who also owned a local hardware store. He was diagnosed with Tourette syndrome at age seven, and his experience with the illness set him on a path to study nursing, with the goal of eventually going to medical school. But exposure to journalism and communications in college led him to switch focus.

Dean was born in New Jersey, of Texan parents, but grew up in Australia, where her parents relocated when she was five. She came to the U.S. for college, surprising herself by being drawn to religious studies, and has remained here since. The U.S. is now her home, though she retains a “wandering spirit,” even as her vocabulary has slowly shed its Aussie words (“brolly” has given way to umbrella, for example).

The couple got married earlier this summer, about a year after moving to Yellow Springs, and spent a brief honeymoon in Iceland.

“We both get really excited about things, and do them,” Dean said. “We’re both kind of impulsive.”

Rogers said he thrives on deadlines and a fast pace, and likes being the one who “does the thing that maybe can’t be done” in his professional work. His wife is the planner and researcher who “has wonderful ideas.” He paused. “Some ideas are more far-fetched than others,” he confided.

“One project at a time,” Dean said. “That’s a song we sing to remind ourselves to slow down.”

She may not be taking her own advice, however. In addition to moving, getting married and helping to launch Immersion Media, Dean is finishing her dissertation. She is a Ph.D. candidate in theology at Vanderbilt University. Working in the “constructive” theological tradition, which understands religion as story and metaphor, her particular focus is eco-theology — a reimagining, and healing, of the relationship between humans and the earth.

In addition to her doctoral work, she taught as an adjunct professor at Antioch College last spring, and is teaching there again this fall.

“Antioch students are so cool,” she said. “I’ve been really impressed with how much they care.”

Dean plans to defend her dissertation this spring and begin a job search thereafter. Though she hopes to find a teaching position in the area, both she and Rogers recognize that the realities of the academic job market might push them further afield. But they are putting down roots here nonetheless — planting a small garden, building a free-standing deck in their back yard, redoing the plumbing in their house.

Yellow Springs has been good to them, they said. And Rogers’ daughters, who spend part of their time in the village, are loving being in a small town — especially one that’s next to a big nature preserve. The twins attended eco-camp at Glen Helen, and the family spends a lot of time together in the Glen, as well as at Ellis Pond and the area around Glass Farm.

“They both crave nature,” Rogers said. “They are so glad to be out of the city.”

The girls have made friends in the neighborhood. “They tell us, ‘Everybody here is so nice. There are no mean kids.’ That’s a direct quote,” Dean said.

There’s a bit of wonder in the couple’s voices as they reflect on how a Google algorithm led them from Nashville to “the most liberal town” in Ohio.

“We are very pleased with our choice to come here,” Rogers said. “We’ve been nothing but pleased.”

“This is a good little town,” Dean agreed.