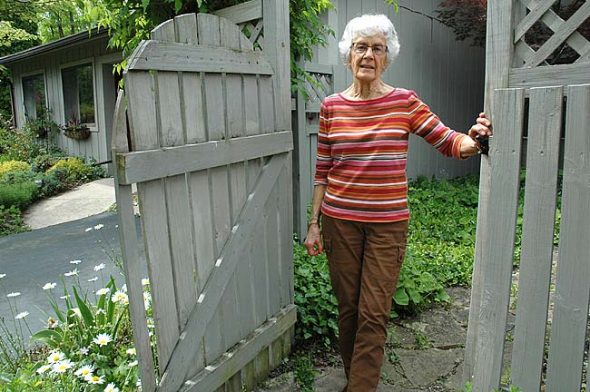 Two years ago Joan Champie left her home of 30 years in Texas and moved to Yellow Springs, knowing only one person in the village. She says she’s glad she made the move. (Photo by Diane Chiddister)

At 83, she’s no longer invisible

For her 60th birthday, Joan Champie jumped out of a plane.

“I grinned all the way down,” she said of her first tandem parachute jump.

Soon after, Champie got her pilot’s license and for the next 15 years, she flew a small plane in the skies above Austin, Texas, where she lived at the time.

So Champie, 83, is no stranger to taking risks. And in 2014, she added one more risk to her already impressive list. At age 81, she moved across country to settle in a small midwestern town where she knew exactly one person.

That town was Yellow Springs. Two and a half years later, she has no regrets.

“I feel like I have a new life,” she said in a recent interview.

It was during her first visit to Yellow Springs, in the fall of 2013, that Champie decided to move here. She was visiting her longtime friend and fellow musician Mary White, and as the two women were poking around at the local farmer’s market, Champie suddenly felt sure that this was where she wanted to live.

This is the eighth article in an occasional series
looking at why people choose to live in Yellow Springs.
If you have a story that fits our theme,
feel free to contact us at ysnews@ysnews.com.

“I liked the faces of the people I saw here,” Champie said. “They looked interesting and open, as if they’d be happy to talk.”

Yellow Springs felt like home to Champie, and the feeling was a new one. Although she’d lived in Austin for 30 years, having moved there to take a job, she’d long felt like a fish out of water. Texas culture didn’t jibe with her liberalness and impulse toward authenticity.

For instance, she was an older woman who wore jeans and let her hair turn white. But in Texas, hardly anyone else did.

“In Texas, you don’t become white-haired,” she said. “You become blonde.”

Also in Texas, as an older woman, she often felt invisible to others. But she doesn’t feel invisible in Yellow Springs.

“In this village there’s a wonderful community of older women who are thinking and feeling,” she said, counting her Park Meadows neighbors Julia Cady, Dimi Reber and Fran LaSalle as among that group. “These women are participating in the world, helping, volunteering, caring for others.”

In Yellow Springs, Champie has found that seniors “are a vital part of the community.”

Perhaps not surprisingly, Champie leads an active life in the village. She teaches sign language at the Senior Center and plays the recorder with a friend, after having to give up the accordian due to back problems. She’s a docent at the Air and Space Museum at Wright Patterson Air Force Base just to be around planes, and also volunteers at Glen Helen. She walks several miles every day and spends time with new friends.

Asked if moving to Yellow Springs has met her expectations, Champie replied, “No, it’s exceeded my expectations.”

Champie has herself been exceeding expectations for some time. As a young woman in the late 1950s, she was hired as an oboist in the Baltimore Symphony, the first woman ever in that group’s wind section. However, after marriage and starting a family, Champie found that the life of a professional musician didn’t square with the demands of motherhood. So she stayed home with the kids but later, at age 38, pursued a college degree and then a masters in speech pathology in Washington, D.C.

After her marriage broke up, Champie decamped with her two children for El Paso, Texas, leaving behind the trees and seasons of the East that she loved.

“It was a shock,” she said of El Paso, citing a “lack of vegetation” and not much cultural life.

A better job took Champie to Austin, where she worked as an administrator in a state school for deaf children. She drove hours to keep up her music, playing the oboe with a group in Dallas. She was also raising her children.

Was it a challenge to be a single mother at a time when few women were divorced?

“I didn’t know any other way,” she said with a shrug.

After retirement, Champie decided to not only learn to fly but to play the accordion. She enjoyed the Italian love songs and French café music she mastered, entertaining residents at nursing homes and hospice centers. She also kept busy volunteering at an AIDS center and the library. But the Texas culture never did grow on her.

“The heat, the guns,” she said. And there was a lack of neighborliness. “If you said hello to someone on the street, there was no answer.”

So in Yellow Springs Champie is loving the trees, the seasons and the friendliness of the community. And even though she’s spent a lifetime taking risks, that doesn’t mean she’s fearless. The parachute jump two decades ago?

“I was scared shitless,” Champie said. But she jumped anyway.

And moving across country at age 81 to a place where you hardly know anyone? There have been hardships here, as well, such as landing in Yellow Springs in the dead of winter. It was difficult to get outdoors to take her daily walk, and it took a while to find her way around, even in a small town. People are busy in Yellow Springs, and Champie often needs to assert herself to be included. Housing is more expensive than in Texas, so she has less disposable income. And Champie misses her children — her son is in Austin and her daughter in Denver.

But the children are grown and have their own lives. And the pleasures of feeling at home in Yellow Springs far outweigh the difficulties. To Champie, her latest risk was definitely one worth taking.