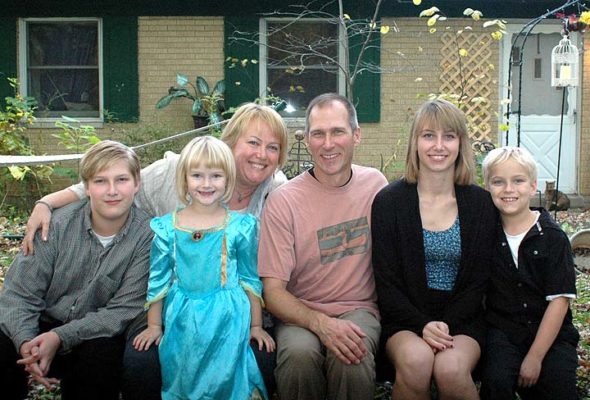 Zo Van Eaton Meister and Dave Meister moved to Yellow Springs in 2009. For Zo, it was a homecoming to a village she’d been connected to since she was a child. The whole family is pictured in front of their Fair Acres home: from left, Sven, Kate, Zo, Dave, Jane and Nicholas. (Photo by Audrey Hackett)

Happy to be home again

WHY YS?
This is the final article in our series looking at why people choose to live in Yellow Springs.

When people ask Zo Van Eaton Meister if she grew up in Yellow Springs, she usually replies, “Sort of.” The story of her connection to the village is complicated. But since 2009, when she and her family moved from the Seattle area to settle here, her relationship to this place has become simple and clear: she’s a Yellow Springer, and her husband and four children are, too.

Zo had a peripatetic childhood, bouncing between the East and West coasts with parents she describes as “hippie artists.” The frequent moves were hard on her and her older sister, she said in a recent interview. When she was 8, her grandparents, John and Mary Jane Van Eaton, retired to their 100-acre family farm off Clifton Road, just outside Yellow Springs. Zo and her sister and mother, Marilyn Van Eaton, who now lives at Friends Care, began spending summers on the farm. It was a welcome place of rest and peace, Zo said.

“My grandparents were my anchor,” she said. “They’re the family that I stick with in my heart.”

Her memories of Yellow Springs from that time — some 40 years ago — have the quality of dreams, she mused. One “gem of a memory” involves eating dinner in the rock garden of Harmony Cafe (now Aleta’s Cafe); another involves buying beads with her mother from Unfinished Creations, then, as now, run by Pamela Hogarty.

“When we moved back [in 2009] and these places were still here, still intact, I was floored,” Zo said.

Yellow Springs became her full-time home when she was a teen. She moved with her mom, then divorced, and sister to the village when she was 14, graduating from Yellow Springs High School a few years later, class of 1985. She initially attended Miami University, then decided to transfer to Evergreen State College in Washington state. But she left for the West with a promise to herself: she’d be back.

“Coming back was always part of the plan,” she said.

At Evergreen State, she studied art and psychology. And she met a young man named Dave Meister, a budding biologist native to the Seattle area who loved marine mammals and bats. “Lightning struck. It was love at first sight,” she said. The couple waited two years “to be sure,” then married in 1992.

Zo continued pursuing art and psychology in graduate school, graduating with a degree in art therapy and individual, couple and family therapy from a university in San Francisco. She and Dave moved back to Washington, and over the next 10 years or so, Zo worked in the mental health field, in the courts, for a county agency and in private practice. She also taught psychology at Antioch University Seattle. Meanwhile, Dave built a career as a biologist with the Washington Fish and Wildlife Department. His job often involved working with the game wardens on their cases, which spurred his interest in becoming a game warden himself.

“Biologists make the rules for conservation, but game wardens enforce them,” he said.

To get law enforcement experience, he began working part time for a police department in a small, rather rough town. He liked the work, which he hoped to parlay into a Fish and Wildlife game warden position. But then the Great Recession hit in 2008, the state froze hiring, and life for the family — which had grown to include three children, Jane, Sven and Nicholas — changed.

Zo was shaken by three deaths that same year: her beloved Van Eaton grandmother and two old friends from Yellow Springs. Coming back to the village for the funeral of one of those friends, Eric Seimer, she knew that now was the time to activate the plan she’d made long ago.

“Moving here was really precipitated by Eric’s death,” she said. “It made me say, ‘This is it. I’m not waiting any more.’”

Around the same time, an inheritance from her grandmother — deriving from the sale at auction of the Van Eaton family farm the year before — gave the family a “nest egg” to help fund the uprooting and rerooting of five lives. The family poured everything into that cross-country move, Zo said.

“We drained our retirement to come here to make it work,” she said. “But we were investing in our future.”

Zo and the children moved here in the summer of 2009. Dave followed in the fall. A job he thought was assured with the Springfield police department fell through — another casualty of the recession — and he began talking with then-Police Chief John Grote about opportunities in Yellow Springs. That winter, Dave walked up and down Glen Helen, partly missing the landscape of his former home and partly becoming acquainted with the natural environment of his new home.

“I was still looking for work and I walked in the Glen every day,” he said.

Grote hired him on to the local force, part time at first, then full time. Six years later, Dave is, to his surprise, the senior patrol officer in the department. “I’ve seen a lot of people come and go; that’s been sad to see,” he said. But he’s loved the work of small-town policing.

“I think this community is really great, and I like helping it be as good as it can be,” he said.

When the family moved east, Zo made the choice to transition from her professional work and stay at home full time with her children, including a fourth child, Kate, born in Yellow Springs. “Moving here was all about simplifying our lives,” she said, describing a satisfying, but hectic and expensive life in Seattle. “We were leaving the rat race to slow down and breathe some fresh air,” her husband confirmed.

The family rented for the first few years here, then purchased a house, in the Fair Acres neighborhood, three years ago. “It’s nice having a homestead,” Zo said. On a recent weekend, that homestead was decked out for Halloween, with tombstones suggestive of a rather lurid family plot in the front yard.

And in fact, the Van Eaton roots go back at least 150 years in Greene County. That history is deeply important to Zo. “I love connecting with people who knew my grandparents,” she said. She feels an “extremely strong tie and commitment to the region” because of her family history. It’s motivated her to run for Miami Township Trustee twice, most recently in 2015. She plans to keep running to maintain momentum for an eventual shot at a seat. Preserving the land and protecting its people are her passions, she said.

While much has changed in the 41 years since she first set foot in Yellow Springs — in her view, the village has morphed from a hippie-artist town to a tourist destination — the sense of community remains as strong, and compelling, as it ever was.

“There’s so much wealth of community here,” Zo said.”When you live somewhere else [and come here], you really recognize it.”

By returning, she feels she has come full circle. A town and region that once offered her the promise of home is now truly her home, the place where her own family is taking root. In the ninth grade, her eldest, Jane, is nearly the same age Zo was when she entered Yellow Springs High School. And her youngest, Kate, is now in preschool at Friends Care Center, where she can visit regularly with her grandmother, Marilyn.

No community is perfect, Zo said, but this one is perfect for them.

“I just have tears of joy all the time,” she said, through tears.