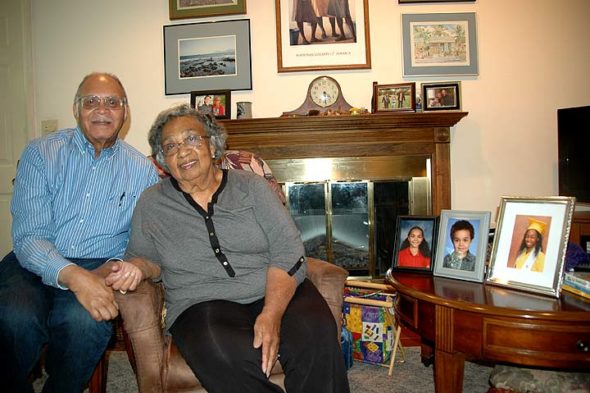 Bob and Olga Harris live in the same Miami Drive home they purchased (for $24,500) almost 50 years ago. They found Yellow Springs an excellent place to raise their three children, whose photos, along with those of their three grandchildren, are proudly displayed in their home. (Photo by Diane Chiddister)

WHY YS?
This is the thirteenth article in an occasional series looking at why people choose to live in Yellow Springs.

Robert and Olga Harris are the proud parents of three adult children who have each excelled in their chosen professions. Angela, the oldest, was the first African-American woman awarded tenure at the University of California, Berkeley, School of Law, and now teaches law at UC Davis. Anne, who lives in Chicago, is a professional violinist and songwriter who tours Europe and the United States with the Otis Taylor Band and also fronts her own group, the Anne Harris Band. And Michael, the baby of the family, is a Wall Street financier who works as the managing director of investment management at Morgan Stanley.

All this achievement came from talent and hard work, of course. But the Harrises believe that growing up in Yellow Springs also played a part in their children’s success.

“I think Yellow Springs had a lot to do with it,” Bob Harris said in a recent interview.

In the late 1960s when they moved to the village, racial segregation and prejudice was a reality in most cities and towns, such as the Dayton neighborhood where the family lived previously. But in Yellow Springs, the Harrises found a place where their children were free to be who they wanted to be without the burden of  racial prejudice, according to both parents.

Ironically, it wasn’t until they went away to college that the Harris children were affected by segregation and prejudice, but by then, they each had a strong sense of self.

“They could just walk through the boundaries around them and still be themselves,” Olga said.

They believe their children also benefited from the focus of many villagers on doing meaningful work rather than just accumulating symbols of success.

“People here are thinkers who want more out of life than just a big house or big car,” Bob said

It’s been almost 50 years since the Harris family moved to town, a move sparked by Angela turning 5. The family knew she was gifted — she started reading at age 3 — and didn’t want to send her to Dayton public schools, especially the segregated schools in the West Dayton neighborhood where they lived. Colleagues at Bob’s job at Wright-Patterson Air Force Base, where he worked as an engineer, suggested that Huber Heights, Wilberforce or Yellow Springs might offer better schools.

But after coming to Yellow Springs, they didn’t bother going anywhere else. They were shown a house to rent on Lisa Lane, which was then on the eastern edge of town.

“The girls loved it,” Olga said. “They acted like they felt right at home.”

So the family moved to Yellow Springs, and Olga was amazed by the neighborhood’s friendliness — every single neighbor showed up with a gift of food or a greeting, she said. A year later, after new homes had been built on Miami Drive one street further east, Bob surprised himself by going to a sheriff’s auction and bidding on a house, the same house where they ended up raising their children and still live. (He paid $24,500 for it.)

“I’d never been to an auction before and I bought a house,” he said, shaking his head in wonderment.

All didn’t go easily, however, as the Miami Deposit Bank, the local bank at the time, wouldn’t give the family a loan, although Bob held a professional job at the base. But they did get a loan from a Springfield mortgage company, and the purchase went through.

Decades of child-rearing followed, and the years were good ones. While Olga wishes the schools had had a gifted program for her daughter, Angela remained challenged by skipping two grades and entering college at age 16. Angela also loved music, and she and Anne both studied the violin with Shirley Mullins. Anne and Michael played soccer.

“There was so much for them to do,” Olga said.

She also appreciated the diverse ethnicities of her children’s friends. A typical sleepover might involve children from Asian, African-American and Caucasian backgrounds, and the children seemed entirely comfortable with those different than themselves.

“They could mingle with anyone,” she said.

The family’s bucolic life in the village was especially notable in contrast to the far more difficult lives of their parents, especially Bob’s parents. While Olga’s family came to this country from Barbados, Bob’s parents, the children of North Carolina sharecroppers, had stopped going to school after fifth grade because children were needed to work in the fields. His grandfather brought the family to Philadelphia in search of opportunity.

“I guess you could say they were illiterate,” Bob said of his parents, but they valued education highly because they’d been denied it.

Olga’s family, while much more educated, also came to Philadelphia in search of opportunity. While both families made better lives than they had left, they also experienced the reality of racism in this country. While in the African-American community blacks from Barbados didn’t mingle much with blacks from the South, they all looked the same to some white Americans, according to Olga.

“It didn’t matter if you were from the South or from the West Indies, you were still discriminated against,” she said.

Bob and Olga met in Philadelphia when Bob was visiting, and the two fell in love. They married and Olga moved to Ohio to be with him. She stayed home with the children and waited until Michael was in high school before working full time. She then worked many years in the Greene County library system, including the local library. She and Bob both retired a little more than 20 years ago.

Since then, Olga has pursued her love of painting, along with knitting and crochet. She also volunteers, and helped to launch the annual Christmas Tree project at the library, in which villagers donate gifts for those in need.

Bob is clearly proud of his wife, but she shies away from the spotlight.

“I like to fly under the radar,” she said.

Since retirement, Bob has stayed busy organizing the African American Genealogical Society of Miami Valley, and also started a chess club with the late Ken Champney. Along with being a good place to raise children, the village is a good place to grow older, Bob and Olga believe. While they feel the loss of good friends who have died, they also feel the nurturing of other friends, who look out for each other now that they’re older.

Looking back over the last 50 years, Bob and Olga see changes in the village. When they arrived, there was a thriving black middle class in Yellow Springs, which set it apart from other small towns. Many of those professionals worked at Wright-Patterson Air Force Base, because the private sector still wasn’t hiring professional blacks, Bob said.

But that black middle class “is not what it used to be,” Bob said, and he acknowledged that if he were young now and looking for a place to start out, he might choose a city over Yellow Springs with its current demographics.

But the Harrises have no regrets about the choice they did make in the late 1960s, when Yellow Springs was the perfect place for a young professional African-American couple to raise their children.