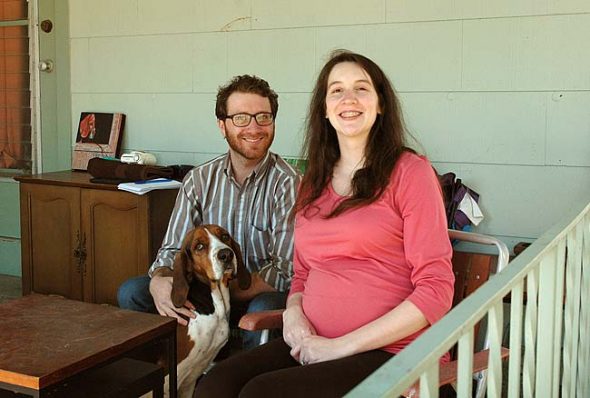 Cory and Amanda Howard, with Townes, a Walker Coonhound they rescued, enjoyed a recent sunny Saturday afternoon on their Cliff Street porch. The couple moved to the village over four years ago. With a rental they love, jobs in the area and their first child on the way, the couple is putting down roots in Yellow Springs. (Photo by Audrey Hackett)

WHY YS?
This is another article in the series looking at why people choose to live in Yellow Springs.

Walk by a certain Cliff Street porch on a spring or summer evening, and Cory and Amanda Howard will likely be out in the cooling air. Townes, their soulful Walker Coonhound, might be flopped beside them, or quietly patrolling the perimeter of their yard. Two cats might be snuggled inside the house, a third mewing to come outside.

“We love just hanging out, enjoying our lives,” observed Amanda on a recent sunny Saturday afternoon. Cory had just come home from work, and she was off for the weekend. Townes was being Townes in the yard.

There are other places Cory and Amanda could be, but it’s here in Yellow Springs that they’ve chosen to live. The couple grew up in Pitchin, near South Charleston (Cory moved there from Springfield in the third grade). They didn’t meet until high school, though, and got together as a couple in 2009. Cory, now 27, went to Wright State, graduating with a bachelor’s in history. He took lots of Africa-centric classes, he said, and had a particular interest in African trade unions. Amanda, now 24, went away to Marietta College, but missed Cory and her family and ended up returning to the area and earning her associate degree from Clark State in social work.

After living in Beavercreek while Cory was in college, then briefly with Cory’s mom, the couple moved to Yellow Springs four-and-a-half years ago to try out a community they hoped to make their permanent home. They wanted to get married and start a family, Amanda said, and Yellow Springs seemed like a good place to put down roots.

“Coming from a small town, we were looking for another small town. Something with a homey feeling that was safe and secure,” she said. Yellow Springs had “everything” they wanted, she added: parks, good schools, low crime, a peaceful atmosphere, even a record store. (Cory is a serious collector of vinyl, with a collection of around 1,000 records.)

For their first two years in the village, the couple lived in an apartment above Williams Eatery. It was spacious and relatively affordable, they said. But hot in the summer — 100 degrees at times. “We fed Townes peanut butter ice cream” to cool him down, Amanda recalled.

Cory said they were lucky to find jobs in the village within a month of moving here. Amanda worked at the Children’s Center in the morning, Tom’s Market in the afternoon. Cory worked in the kitchen at Sunrise Cafe. They got by, he said. But they needed more financial security.

“I wanted to start stabilizing our life,” said Cory. So he went to work as a CNC operator at a steel shop in Springfield. “It was really good for us,” said Cory of the increase in responsibility and pay the position provided. Amanda meanwhile began working from home for Assurant, an insurance company, doing medical billing. And around this time, the couple moved from the apartment above Williams to their current rental, a house on the corner of North Winter and Cliff streets.

“We lucked into it,” Amanda said. A Saturday morning yard sale stop at the home revealed that the then-tenants were moving out. Amanda and Cory passed along their information to the home’s owner, Betty Ford, and “before we knew it,” they were moving in. The previous tenants, who were moving to a houseboat in Florida, even sold them a lawnmower and left other homesteading essentials behind.

The couple clearly loves where they live. They feed the birds; they take in stray cats; they observe the local wildlife — everything from deer in their back yard to a pileated woodpecker family nearby to a family of squirrels in their maple.

“We respect where we live,” Amanda said. “We want to take care of it.”

A few months after moving in, their life changed in another way. On October 11, 2014, they got married at Camp Birch, which Cory knew and loved from his Boy Scout days. “We thought about a church wedding, but this felt more like us,” Amanda said.

As it happened, that particular blissful Saturday was Fall Street Fair day.

“It was hell,” Cory laughed, describing the logistics of maneuvering from their home to Camp Birch. “But it all worked out.” Townes, a rescue named after Townes Van Zandt, Cory’s favorite musician, was their canine ring bearer. Amanda, who’s clever with crafts, made the little ring pillow they strapped to Townes’ back.

And last spring, their lives changed again. Cory was still working at the Springfield steel shop when he heard about a company in Yellow Springs — just two blocks from their house — that was doing agricultural research using black soldier flies. Three of Amanda’s high school classmates from Pitchin were already working there. “At first I thought, ‘This can’t be real,’” Cory laughed. But further investigation revealed what sounded to him like a “great gig.” He applied, and gave notice at the steel shop. “I went out on a limb, but I knew I wanted to find something closer and better.” He was hired by EnviroFlight in March of last year.

“It’s changed our life,” Cory said. “Financially we are so much more secure.”

Cory said he loves his work. As processing supervisor for the company, he transforms the black fly larvae into the finished product, larvae-based feed meal. According to previous News reports, EnviroFlight is seeking federal approval for the sale of the meal as livestock feed, a step the company believes could transform the farming industry and fight world hunger. To Cory, the vision is compelling.

“I believe in it. Everyone here is really on board, really driven. We believe this is something.” Cory appreciates the professional atmosphere at EnviroFlight. “I have a college degree, but I’ve always worked with my hands.” This position seems to span the two worlds. “Glen honors people who have degrees,” Cory said. (Glen Courtright is the company’s founder.) The workers are young, educated and serious about their work, he added.

If it wasn’t for the EnviroFlight job, “we’d probably still be here [in Yellow Springs],” Cory said. “But the job made a difference. It solidified everything.” And that solidity has ushered in yet another change in the couple’s life, he said. “It spurred us to want to have a child.”

Amanda is currently eight months pregnant. The nursery, which is also her craft room, is ready: the crib is set up, blankets she knitted and crocheted are neatly folded inside. Colorful paper crafts left over from their wedding hang on the wall. Amanda now works full time at an insurance broker’s office in Springfield, a job she will probably continue after the baby comes. The couple still needs to figure out child-care arrangements.

“It’s nerve-wracking, but it will all fall into place,” Amanda said.

“We’re good at bouncing back, at making the best of situations,” Cory added.

And living in Yellow Springs will help, he believes. The couple is already part of a community of young parents in the village. “It’s really family-oriented here,” said Amanda. “I can’t wait to be included in that niche of friends with kids.”

Friends outside Yellow Springs point out that Cory and Amanda could be making house payments elsewhere for the amount they pay in rent here.

“But we’re paying for what comes with living here,” Cory said.

One example among many stands out. For about a year, Cory and Amanda had a little feisty orange cat they named Archie, a stray who adopted them. “He followed us whenever Townes and I would go for a walk,” Amanda explained. “And then he just stayed.” Archie became a familiar presence in the neighborhood, and when he died recently, “we had to tell all these people who kept asking us where he was,” Cory said.

“Something as small as a stray cat mattered to people,” he reflected. “There was this acknowledgement of his existence.” (Archie is now buried in their yard.)

That, he believes, is a unique quality of a place where people linger on porches, and walkers stroll, and stop, by. Cory works with a couple of young men who grew up in Yellow Springs, and he senses a certain optimism and innocence to their outlook, a “glass half full” view of life. “They’re different — in a good way,” he said.

The couple hopes to give their children a similarly good life in the village. About this article Cory said, “We can tell our child, ‘See, we did this for you.’” His face was serious, and he was smiling.