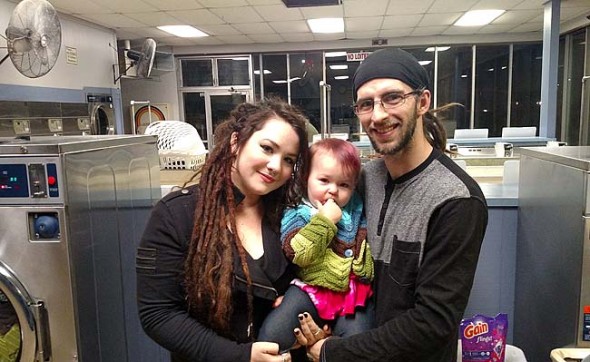 Artist Anna Burke and musician Ryan Stinson, with their daughter, Presley, 18 months, on a recent evening at the laundromat on Dayton Street. Burke and Stinson each moved to Yellow Springs in 2012 from nearby communities. They met here and have begun to build a life in the village, loving the community and navigating the challenges of housing, employment, parenthood and pursuing their art. (Photo by Dylan Taylor-Lehman)

Anna Burke, her husband, Ryan Stinson, and their daughter, Presley, are a young family whose appreciation for Yellow Springs has evolved over their four years in the village. They are familiar faces around town, as they both work at Tom’s Market, and this means they know everyone in town as well. Despite the occasional challenges of living in Yellow Springs, the overwhelming feeling of community has made them feel increasingly content and at home.

The family recently spoke with the News in the laundromat about their perceptions of the town and why they are happy to be here, chatting at a back table while Presley remained enthralled by the compelling sights and sounds of the laundromat’s many machines.

“Actually, we owe a lot to the Spirited Goat,” Stinson said. The Goat was the couple’s introduction to the town, and the place where they met each other and many friends and bandmates.

Stinson, 31, moved to town from Fairborn in 2012, to be close to some friends, and to play music at the Spirited Goat. He began emceeing the shop’s open mic night and met the guy who would become his best friend, connections that solidified his interest in staying in town for the next little while.

Burke, 24, who is originally from Fairborn, joined her sister in Yellow Springs after some time “bopping around” other cities and states. It was a transitional point in her life, and she welcomed the change. She packed her car, put her parakeet in the front seat, and moved, just like that, she said. Burke was drawn to the Goat when she got here as well, and she and Stinson hit it off not long after they met there.

That first glorious summer of 2012 is something they both remember fondly. Stinson said that after meeting at the Goat, they spent practically the entire summer playing music outside and being in each other’s company.

“We got to know each other through a campfire,” he said.

Not only was the Goat a nexus of love and music — Stinson’s band the Gin-Soaked Angels got its start there as well — but the community as a whole seemed to mirror the couple’s interests. Burke is a visual artists working in a number of media, and she said that she and other artists are spoiled by the art scene in Yellow Springs. It’s a community that actively supports its members’ endeavors, she said.

Burke shares a studio with two other artists, and she said that she often has the opportunity to learn something from them, or swap methods and techniques. The profusion of talented artists in town means that there is a lot to experience and a lot to draw inspiration from, Stinson said. Far from making one feel self-conscious and competitive, the talent here makes him try harder, to try to keep up with the people he looks up to.

Burke and Stinson’s own artistic productivity increased thanks to the various creative communities in the village, but the couple also discovered that another community was ready to lend its support.

“I didn’t realize the parenting community and family support system was so strong,” Stinson said. “We got to see this once we found out we were pregnant.”

Presley, who is 18 months, was essentially taken care of once the couple announced they were expecting, Burke said. Not only were people they already knew supportive, but many community members began offering their help seemingly out of nowhere. People dropped off food and baby supplies, and gave advice and any support they needed. It’s a great place to raise a family, Burke said. They feel secure here anyway, but more so knowing that their daughter has an entire community looking out for her.

“She’s kind of a little celebrity around here,” Burke said. She’s always happy to go into the woods, she said, and was grooving at the Gin-Soaked Angels’ recent show at the Emporium.

However, for a young family like theirs, the high cost of living and the limited job opportunities can make for some difficulty getting established in Yellow Springs.

“If you are new here, you’d have a really hard time figuring it out,” Stinson said. “You really have to hustle to make it work.”

Finding an affordable place to rent proved a challenge for Stinson and Burke. They, like many people they know, rely on the knowledge of friends and acquaintances in order to track down somewhere to live, as advertised housing opportunities are either too expensive or claimed right away. They both moved in with friends when they got here, and Stinson said every subsequent apartment they’ve lived in, both individually and as a couple, was found through word of mouth. They waited for their first apartment together, on Southgate, for almost a year. A friend told them their neighbor was going to be moving, and they kept in touch with the landlord in order to be next in line. Their next potential place, a house, was likewise found through word of mouth.

Any housing possibility seen in print is likely taken by the time it’s read, Burke said. She says she knows people who have lived in tents or who have been couch-surfing for six months, waiting to get into the “word-of-mouth bubble.”

“But once you’re in it, it’s almost like you’re in a system,” Burke said, though Stinson added that being in the know doesn’t necessarily lead to cheaper places, just greater knowledge of the possibilities.

However, once a place to live is found, it’s almost certain that rent is going to be significantly higher than anywhere else nearby, Burke said, which is why living in Yellow Springs often requires residents to have more than one job. The same word-of-mouth knowledge is necessary for employment, too, Burke said.

Burke currently has four jobs to help pay the bills. She works as a cashier at Tom’s, does dreadlocks, works as a housekeeper and is an artist, though she is about to start a new job at the Addictions Resource Center that pays a little better and will cut down on her need to hustle so intensely. Stinson said he is lucky enough to work fulltime in the deli at Tom’s, though revenue from playing shows with his band helps a bit too. Burke added that, because of the cost of living, they can’t afford to make art and music strictly as a hobby — they have to make their passions work for them financially as well.

“But we’re both very motivated people and we love working hard,” Stinson said, “and it pushes us to get better and better.”

All in all, though, the couple agrees that the benefits of living in Yellow Springs are worth the challenge. They cited the schools, the safety and the art community among the reasons why they want to stay, even though they’ve found significantly cheaper places outside of town, in places like Enon and Xenia.

“I joke around that it’s like living in New York City,” Stinson said. “You are paying for the experience of being here.”

And it is this overall experience that has led Burke to feel increasingly attached to the village. She was part of the “younger partier crowd” when she moved here, she said, but her years of experiencing what she says is the village’s real pulse has given her a deeper appreciation of what the town can offer her and her family. She came here when she was really lost, she said, and she got a community hug when she really needed it.

There’s a higher level of consciousness and awareness among the people who live here, she said. People live here because they want to contribute to the community, and that inspires a different way of living for the village as a whole. Stinson said he used to come here with his parents when he was younger and always felt like he’d want to end up in Yellow Springs.

“Now all we talk about is staying and growing old here,” he said.