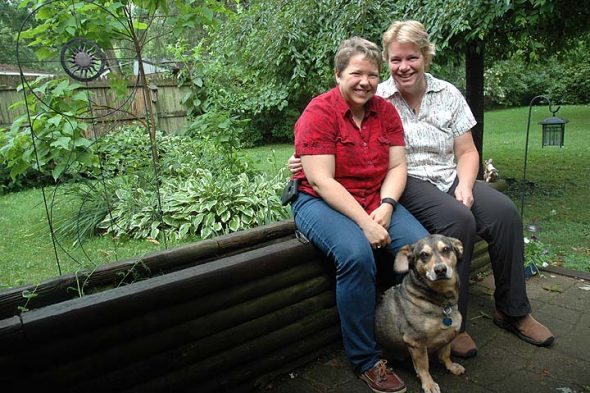 Lori Collins-Hall and Chris Burgher are shown here with their dog, Snickers, in the backyard of their Gardendale Drive home. The two moved to Yellow Springs two years ago from upstate New York after Collins-Hall was offered the job of vice president of academic affairs at Antioch College, where she is now provost. (Photo by Diane Chiddister)

Choosing a college and a town

WHY YS?
This is the eleventh article in an occasional series
looking at why people choose to live in Yellow Springs.
If you have a story that fits our theme,
feel free to contact us at ysnews@ysnews.com.

When Lori Collins-Hall and Chris Burgher first visited Yellow Springs two years ago, they were checking out the village as a place to live. Collins-Hall had recently been offered the job of vice president of academic affairs at Antioch College, and the job was appealing. But before they arrived, the women weren’t too sure about the town. They already lived in a small town in upstate New York, population 15,000, and Yellow Springs was, well, really small.

They pulled into the village on a Friday night and parked downtown, surprised to hear live music pouring from the Emporium. And the sidewalk was full of people, talking and laughing. The next day, they stopped into the Train Station for a calendar of activities, and were amazed at all that was going on.

“There was more going on here than where we came from,” Burgher said recently, with a laugh. “I immediately fell in love with the town.”

At the time, Collins-Hall was chair of the sociology department and assessment coordinator of institutional effectiveness at Hartwick College in Oneonta, N.Y. She had recently opened up an email in which Antioch College President Mark Roosevelt was asking if she might be interested in coming to Antioch to help rebuild the college.

“I thought it was a prank,” she said of the email.

But it wasn’t a prank, and Collins-Hall was attracted to the job. She had the expertise, having focused her career on building skills in strategic planning, assessment and institutional effectiveness, skills sorely needed by a recently revived college. And she was intrigued by the opportunity.

“There aren’t many people in higher education administration who get to be involved in raising up a college,” she said. “The door opened and it seemed foolish not to walk through it.”

Not long after, Collins-Hall moved to Yellow Springs to take the job, which also involved helping to oversee the effort to gain accreditation. The hours were very long — she sometimes worked 16-hour days — but she wasn’t surprised.

“Friends had told me about the life of a vice president of academic affairs,” she said. “I knew there would be long days.”

And it helped that she enjoyed not only the work but also her co-workers.

“My colleagues at the college are wonderful,” she said. “I’ve rarely worked with a group of people who care so much about what they’re doing.”

At the time, it also helped that Burgher hadn’t yet moved to Ohio, so that Collins-Hall didn’t mind working long days. Burgher stayed nine more months at her job as an administrative assistant at the State University of New York at Oneonta, visiting Yellow Springs regularly to look for a house. While housing prices in Yellow Springs were higher than they expected, the women found a rental with a big backyard on Gardendale Drive, which they now share with Snickers, their dog. They also have room for visiting friends and relatives — both women have two adult children, with Burgher’s two sons ages 26 and 29 and Collins-Hall’s daughters ages 21 and 24.

The women laugh when they explain that they met on Match.com. It’s funny because they had circled each other for decades, living within a mile of each other in the same town, working in close-by universities, having the same friends and even going to the same Happy Hour — but until Match.com, they hadn’t met. Now, they’ve been a couple for eight years, and were married in New York State two years ago.

Burgher retired from her job on Jan. 30, 2015, and set off to drive to Yellow Springs the next day. While the couple doesn’t see each other quite as much as they would like (although the hours aren’t quite so long now that accreditation has been won), Burgher is settling into life in her new home. She enjoys taking pottery classes at the John Bryan Community Pottery, hiking in the Glen and gardening. When she wants more activity, she takes on contract work, and recently oversaw organizing the college’s commencement activities. And on weekends she and Collins-Hall like to hike and explore their new area — some Sundays they’ll set off in the car and just decide on the spur of the moment whether to turn left or right.

For Collins-Hall, work at the college, where she is now provost, remains rewarding. While the accreditation efforts are over until the 10-year review, she hopes to help the college define itself as a distinctive institution that offers real opportunity for young people to make a difference, both in their studies and in their school.

“Every liberal arts college these days say they offer a holistic experience,” Collins-Hall said. “But both the vision and the experience at Antioch sets it apart in the very real integration of students’ lives both in and out of the classroom. We want to capture that, the ways that students are involved in every aspect of the college.”

Both Collins-Hall and Burgher are glad they ended up in Yellow Springs.

“I love the work I do,” Collins-Hall said. “Every day it’s full and meaningful.”