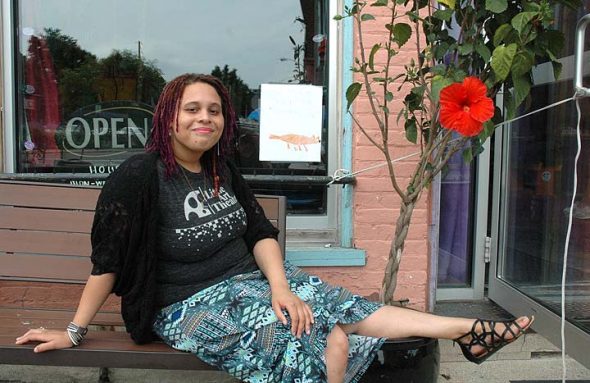 Alexandra Scott, known in Yellow Springs as Alex, posed outside the Spirited Goat on a recent afternoon. The Dayton Street coffeehouse is one of her favorite village haunts. A poet, activist and events coordinator extraordinaire, Scott moved here in 2012 and has gradually made the village her home. (Photo by audrey Hackett)

Living, learning in the real world

Why YS?
This is the tenth article in an occasional series looking at why people choose to live in Yellow Springs. If you have a story that fits our theme, feel free to contact us at ysnews@ysnews.com.

From the Mills Park Hotel to the Spirited Goat, people know her by name. A former Antioch College student and onetime Tom’s Market employee, she now works as the special events coordinator for the Chamber of Commerce.

Scott, 22, moved to Yellow Springs in 2012 to attend Antioch, drawn by its progressive legacy and the chance to help remake the college. She had two positive co-op experiences, at a food hub in Columbus and as a Miller Fellow at the Yellow Springs Arts Council, where she helped launch the Artists’ Directory, but decided to leave Antioch during her second year. “It just wasn’t the right time in my life” for college, she reflected in a recent interview. But she enjoyed the blend of art and social justice in Yellow Springs. And so she stayed.

In fact, the Columbus native had been coming to Yellow Springs since she was a baby — for Street Fair. “My mom and I are huge festival fans,” Scott grinned. Scott was raised by her mom, Karen; her dad died when she was three, and perhaps as a result, mother and daughter have always been close. Scott counts her among her mentors and heroes.

Scott and her mom still take part in Street Fair. But these days Scott is the organizing force behind the twice-annual event — the most recent June Street Fair was the third she’d had a major hand in planning — and her mom helps staff the event as a volunteer.

Mother and daughter share another passion: poetry. Scott described difficult times earlier in her life. “I was bullied in elementary and middle school,” she said. “I was really shy; I didn’t like myself.” But she began to flourish in high school after discovering poetry and finding her niche in the Columbus poetry scene. Soon she was writing and performing regularly. She even co-performed a piece during the 2011 Individual World Poetry Slam, a national event. And she brought her mom into poetry.

Now, according to Scott, the word in Columbus poetry circles is, “If Karen Scott’s not coming to your poetry night, your poetry ain’t shit!” Scott’s tone was playful, and proud.

If poetry has been transformative, so has making her way in Yellow Springs. When Scott left Antioch in 2014, she faced two immediate challenges: finding a job, and finding a place to live. She worked at Tom’s Market as a cashier for nearly a year. (She was part of the “Antioch takeover” at Tom’s, she joked, a period that saw a surge of students working there.) She picked up a few hours of weekend work at the Chamber while still employed at Tom’s, and accepted her current Chamber position in March of 2015.

“Before I worked for the Chamber, things were a lot harder,” Scott admitted, describing a time when making ends meet was tough. “When I was so broke I could barely afford food, people helped me,” she said. If she needed something, she could put the word out on Facebook, and count on villagers to respond. (She’s since left Open Discussion, though, turned off by the “mean” spirit that can surface there.)

“There’s always someone there when you need something,” she said. To her, this willingness to help is a defining characteristic of life in Yellow Springs. “If I was anywhere else I would not have made it this far,” she speculated. She credits Karen Wintrow, her boss at the Chamber, for professional mentoring and support.

“She treats me like a co-worker, she listens to my ideas,” Scott said.

Owning neither a car nor a bike, Scott walks everywhere in town. Walking back from doctor’s appointments or other errands on the edge of the village, she is nearly always offered a ride, sometimes by a villager she knows only by sight. “I feel a lot of gratitude to a lot of people,” she said.

She’s been similarly lucky in her housing experiences, she said. She lived with a friend briefly, then rented a room from villager Leslie Lippert, “who took a chance on me.” Lippert remains a mentor and friend.

About a year ago, Scott was able to rent her own apartment on Dayton Street, where “the people watching is great, and the Gulch is my downstairs living room,” she laughed.

That location is key. Scott is just down the street from the Spirited Goat, “a place that means a lot to me,” she said. It was at the Goat that she discovered she loved to dance, and where she learned to play guitar. “I came out of my shell here,” she said, referring both to the coffeehouse and the wider village.

Coffeehouses are important to Scott — so important that she hopes to open her own someday. “I want to make people happy, and bring the arts to them” through poetry, music and visual art on the walls, she said. Her favorite Columbus coffeehouse is Kafe Kerouac, which she considers “another home to me.” She still goes back there, and helps staff their annual overnight poetry event, working from 1 a.m. to noon.

“I want to open a coffee shop when I’m older, but I’m not sure when ‘older’ is supposed to be,” Scott said. For now, she’s “saving up and just working on myself — pursuing my passions that aren’t work-related.” She doesn’t plan to return to a residential college, but rather envisions getting an online associates degree in business to help advance her coffeehouse dream.

Scott is deeply engaged by social justice issues, especially concerns pertinent to women, African Americans and trans people. Having taken part in Occupy rallies in Columbus and protests of the 2014 John Crawford shooting, she reflected a bit on her efforts to speak up against racism, sexism and other forms of injustice in everyday life. Through her Chamber work, she’s helped organize Yellow Springs Pride, and she recently joined the Home, Inc. board as an interim member, prompted by her passion for tenant rights issues.

“I can stand up for people who aren’t me,” she said, emphasizing the importance of “being an ally to people whose oppressions are different from yours.” But sometimes she struggles to stand up for herself “in that hard moment when something comes up.” She recently made the decision to do so. “I think I’m over worrying about people getting upset with me,” she said. “I’m a black woman and I’d like to be respected as a human being.”

A few years ago, Scott self-published a poetry chapbook titled, “If I Could Be Louder.” She’s just not loud or confrontational by nature, she said; people tend to describe her as “really chill,” “so nice” and “old soul.” Yet in her own quiet way, she’s having an impact, according to Chamber Executive Director Wintrow.

“We work under some very stressful situations especially with Street Fair and I’ve never seen her lose her cool or get angry. She puts everyone we work with at ease with her humor, helpfulness and kindness,” Wintrow wrote in an email this week.

Scott reflected that she’s “changed a lot” since coming to Yellow Springs. “I’m stronger than I was four years ago, that’s for sure,” she said. “I’ve learned a lot, experienced a lot.”

Lippert, who saw Scott through some early “growing pains,” said it’s been a pleasure to watch her flourish. “I always thought Alex was somebody really special. … It’s been gratifying to see her grow up and find her place in the world.”

This fall, after October Street Fair, Scott plans to visit the Colorado mountains. Having never lived outside Ohio, she’s keen to travel. And given that touch of wanderlust, Yellow Springs may not be her home forever, she admitted. But it will remain her home in another, deeper way.