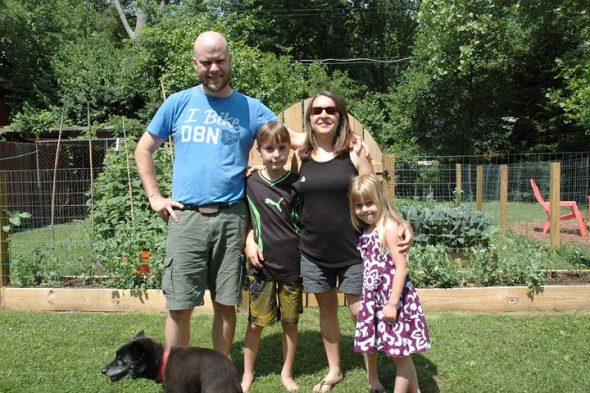 The Oberg family, from left, Eric, Cole, Kelley and Sage (plus 17-year-old dog, Larsen), moved to Yellow Springs in 2014 seeking an open and tolerant community. Intrepid adventurers, Eric, born and raised in Alaska, and Kelley, who lived there for many years, are “homesteading” on a small scale at their Fair Acres residence, including by planting the gardens pictured here. (Photo by Audrey Hackett)

From ‘the last frontier’ to Ohio

Before moving to Yellow Springs, Eric and Kelley Oberg had never owned a home with a doorbell. The 16´ by 20´ cabin they built near Denali National Park in Alaska didn’t need one. Nor did their old farmhouse in rural Hocking Hills, Ohio, where neighbors were a car ride away. But now that they live in Yellow Springs’ Fair Acres neighborhood, the doorbell on their brick ranch home has proved so useful that it “wore through and broke” within a year, according to Eric.

Why YS?
This is the ninth article in an occasional series looking at why people choose to live in Yellow Springs.
If you have a story that fits our theme, feel free to contact us at ysnews@ysnews.com.

The Obergs moved to the village in October of 2014 with their two children, Sage, now 6, and Cole, now 9. Sage and Cole fit easily into a neighborhood full of kids.

“There’s way more people than at my old school,” Sage observed during a recent interview in the backyard of the family’s home. “It’s more populated,” Cole agreed, with the seriousness of a rising fourth grader using a big word. Friends of the siblings are heavy users of the Oberg doorbell.

If the family has traded privacy and remoteness for community and proximity, they’ve done so deliberately.

“This is what we asked for,” Eric laughed. “I’m still getting used to people just stopping by. But that’s what community is.”

Eric was born and raised in Alaska, where both his parents and one set of grandparents were also born and raised. He grew up on Kodiak Island in the town of Larsen Bay, an Aleut community. He and his brother were the only non-Native children there, an experience he said has given him an unusual perspective on being a minority. His family later moved to the mainland, and he attended high school in Anchorage, leaving for college in Colorado after graduation.

“As amazing as Alaska is, I couldn’t wait to leave,” he said. But two years studying to be a sportscaster made him realize how much he missed the outdoors, specifically the Alaskan outdoors, so he left school and returned to his home state to work at Denali National Park. On his first day at the park, he met another young park worker, Eli Kramer, a native of Yellow Springs. They became friends, and from that friendship grew a small but real connection to a place he’d never seen — but would one day live.

Kelley grew up in Cincinnati, but headed for Colorado after high school to work at a ski resort. She did seasonal work, spending her summers in the Grand Tetons and her winters in Colorado and Montana. She and Eric became friends when he was in college in Colorado; after he returned to Alaska, Kelley and several friends drove north to spend the winter there.

“Five broke 20-year-olds setting out for Alaska at the end of October is not a good idea,” she laughed.

But the trip reconnected her to Eric, and they spent their twenties together in the far north. For four years, they worked together as sled dog trainers for the Iditarod, the 1,000-mile dog sled race that is “Alaska’s Super Bowl,” Eric said. They each took part in 300-mile races of their own. And when they weren’t running dogs, they worked in Denali. Eric ran a trail crew 90 miles into the park along its one old mining road, and Kelley worked on a construction crew 50 miles in. The work was one week on, one week off.

Photos of all these rugged adventures hang, somewhat incongruously, on the walls of their cheerful kitchen in Yellow Springs. One photo shows Cole as a baby, and it was his birth that spurred the couple to think about “coming back down,” Kelley said. The desire to be nearer to her parents in Cincinnati was a big motivator for the move.

So Eric began looking for a job, a process he thought “would buy me years,” he joked. But he readily found a position in the Columbus office of the Rails-to-Trails Conservancy, and the couple decided to move to Ohio.

They bought a farmhouse in the Hocking Hills area with three acres for large-scale gardening, a lifelong love of Eric’s.

“We felt we needed to wean ourselves back into society,” he said of their choice to homestead in rural Ohio. They lived there for seven years, “trying to make it work,” Kelley said, but realized the area didn’t fit them. Though they enjoyed aspects of life there, they were distressed by the insularity, homogeny and the “deep-seated racism and intolerance” that was open, not hidden, among many residents, according to Kelley.

“It was really disheartening,” she said. “As the years went on, it became apparent that we didn’t want to raise our kids here.”

And they missed the sense of community they’d known in Alaska. “Rural Alaska is very different from rural Ohio,” Eric observed. In Alaska, people need their neighbors, however far-flung they are, and that potentially life-or-death reliance on others “forces community,” he said. Eric and Kelley also missed the mix of cultures and viewpoints they’d taken for granted in Denali, sometimes described as “where camo meets tie-dye,” Kelley said, for its mélange of native Alaskans, coal mine workers and National Park employees.

Where might they find an open, diverse and tolerant community in Ohio? Having visited the family of Eli Kramer — he’s the son of Len Kramer and Fern Opotow — in Yellow Springs several times, they thought they had a pretty good idea.

With only a month between selling their farmhouse and needing to move, they “lucked into a wonderful house” that they were just able to afford, Eric said. The house and neighborhood were unexpected gifts, but they knew from the start that they wanted their children in Yellow Springs schools. The district has “exceeded our expectations 1000 percent,” said Kelley, who worked in the lunch room of Mills Lawn last year and marveled at the relaxed and caring atmosphere.

About six months after they moved to the village, Eric’s boss retired, and Eric was in a position to lobby to move Rails-to-Trails’ Midwest Regional Office from Columbus to Yellow Springs. That office opened on Xenia Avenue last fall, with Eric as the director of trail development. Kelley also works close to home, as a part-time projectionist at the Little Art Theatre. The family went from budgeting hundreds of dollars a month for gas to needing to fill their tank once every few weeks.

They are finally living the mission of Rails-to-Trails, Eric said, which is to promote walking and biking not just as recreational activities, but as everyday modes of transportation.

“Living in Yellow Springs, I get to do the things I believe in,” he said. The family bikes everywhere, and Eric and Kelley believe the village offers its residents a uniquely foot- and pedal-friendly lifestyle.

That’s not all they see as unique about Yellow Springs. It’s a place where people “try new things, try new ways to deal with hard issues,” Eric said. He said he often hears from longtime residents that the village “isn’t what it used to be.” But he sees lots of evidence, from the school district’s embrace of project-based learning to village-wide efforts to make the village more open and affordable, that Yellow Springs is living up to its legacy of “doing things differently, finding better and unique ways of living.”

At the same time, Eric and Kelley have noticed surprising continuities between Yellow Springs and Alaska. Both communities are places people want to live, Eric said. “You don’t just end up in Alaska,” he reflected. “It’s the end of the line — people are chasing something or running away from something.” That makes for a colorful community of “characters,” he said. Yellow Springs is likewise a place where people actively choose to live, the couple believes. And the village has its own share of characters, though perhaps not quite on the epic scale of the vast, “last frontier” state.

One thing Eric misses is the diversity of views he regularly encountered in Alaska, where his associates included a “notorious wolf-trapper” and park service employees. Though liberal in their social and political views, the couple said they enjoyed, in Eric’s words, “bridging the divide” between different worlds. Yellow Springs has less of that diversity, he believes.

But he appreciates Yellow Springs’ outspoken, activist culture and its penchant for argument and debate — a stark contrast to the apathy he and Kelley found troubling in their previous Hocking Hills community.

“Here, people care, almost to a fault,” Eric said. “Yellow Springs people will debate you on everything.” Kelley quipped, “It’s a dream come true for Eric.”

Still, will the adventurers stay in the Midwest? “Yellow Springs was our last shot at Ohio,” said Eric. He and Kelley still own that cabin, plus four acres, in Alaska, and hope their children will strike out for the far north some day. For Eric, Alaska will always be home. He misses the “absolute quiet,” though he’s found compensations in the glory and diversity of Ohio’s trees. For Kelley, “home is where my family is.”

Yellow Springs — their “last shot” — is going to last, the couple believes. Their village home is already a homestead, with fruit trees they’ve planted out front, a chicken coop with four resident chickens and a tidy enclosure of raised garden beds Eric built out back, plus an asparagus patch in the side yard. A few blocks away, at the Fair Acres community garden, they’re into their second season of homegrown garlic.

All this, and a doorbell, too.