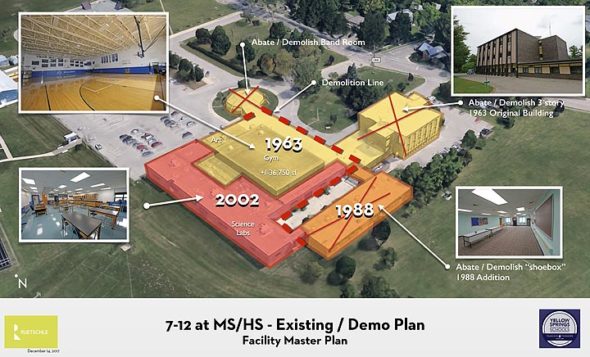 by Yellow Springs School Board
The Yellow Springs school board voted unanimously at its Dec. 14 meeting to seek a May 2018 levy for a proposed $18.5 million rebuild/renovation of McKinney Middle/YSHS. Pictured here is a concept design, prepared by Ruetschle Architects and presented at the meeting, showing the buildings targeted for demolition, as well as those where renovations only are planned. (Rendering submitted)

The Yellow Springs school board voted unanimously Thursday, Dec. 14, to seek  $18.5 million for the “renovation and partial replacement of existing 7–12 facilities” through a combination income tax and bond levy request to be put on the May 8, 2018, ballot.

The ballot request supports a plan that focuses the district’s immediate facility improvements on the middle and high school complex on East Enon Road and leaves the downtown-located elementary school for a later time and separate funding. District Superintendent Mario Basora made the recommendation during the regularly scheduled December board meeting.

“Lots of plans have been thrown around and discussed” in the nearly 14 months in which the district has actively considered the future of its aging school buildings, Basora said.

Highlights of the proposal approved Dec. 14 include razing the so-called “shoebox” that currently houses middle school classrooms, to be replaced by a new middle school wing; as well as tearing down the high school’s three-story module for “a new, single-story academic core.” The music room, popularly called “the flying saucer” because of its shape, also is set for demolition, while the gym is to remain intact with some upgrades.

An assessment last spring by the Ohio Facilities Construction Commission, or OFCC, identified a variety of structural and mechanical deficiencies at both local school sites. Particular areas of note at the high/middle school included plumbing and water leaks, electrical wiring, fire suppression, heating and ventilation.

While the OFCC’s findings have been questioned by some local residents, district officials have said that the assessment is the best available tool, and widely accepted state standard, for identifying educational facility needs.

Basora said the structural issues not only negatively affect the health, safety and comfort of students and staff, but also don’t support contemporary instructional  requirements.

“Our schools were built on an old, industrial model,” he said. “Pedagogically speaking, we need to build schools for the 21st century. … These schools we’re in were built when the computer hadn’t even been invented yet.”

The plan for the high/middle school classroom layout, which Basora said was designed with teacher input, features “extended learning areas” meant to be conducive to collaboration and group work.

“’Flexible space’ is the word of the day now,” he said of the classroom arrangements. He said that the plan not only enhances contemporary educational practices, but also considers the anticipated needs of future students who will live and work in a world where collaboration and effective communication are important skills.

“This is not a set up for PBL,” he added, referring to the district’s Project-Based Learning curriculum. “Will PBL work with this? Yes. Will traditional style work? Yes.” The district’s focus is on “deeper learning concepts” that cross instructional models, he said.

In settling on his recommendation to the board, the superintendent said he took into account community feedback, including results from a survey conducted this fall by Wright State University, about what villagers would and would not support.

As community response indicated that local residents preferred keeping the schools where they are and maintaining the current grade configurations — as opposed to constructing a K–12 complex — and desired a combination of rehabilitation and new construction, the district considered including a new performance space in the high/middle school plan.

However, Basora told the board Dec. 14 that the up to $3.5 million additional price tag of such a space did not seem an appropriate request from voters who have made it clear in public forums and the survey that they are concerned about costs. While he said he supports a performance space, which would serve the community as well as the schools, he thinks a separate community-based fundraising campaign is the best way to build it.

Architect Mike Ruetschle, whose firm is working with the district, said that the overall plan is “sensitive to the fact that the community is still paying on the 2002” facility upgrades.

There was little board discussion before approving Basora’s recommendations.

Board member Anne Erickson asked about the possibility of tax proceeds falling below the needed level of funding at some point in the future. District Treasurer Dawn Weller replied that such fluctuations are taken into account in the financial projections.

Board member Steve Conn noted that the combined rehab-rebuild plan allows for “less than 40 percent of the footprint that already exists” at the high/middle school to remain, while at the same time, “it will transform the experience of being in that building.”

Community input at the top of the meeting included villager Rose O’Brien reading a letter on behalf of David Roche that among other points called for more assiduous attention to facility maintenance.

Malte Von Matthiessen spoke in favor of facility improvements, noting the groundbreaking that morning for the Cresco medical marijuana processing plant promised jobs that could bring new families to town.

“To me, [upgrading school buildings] is an investment in Yellow Springs, not just the school system,” von Matthiessen said.

Former board member Richard Lapades spoke in agreement, and suggested that “it wouldn’t be a bad idea to add a maintenance schedule for all of the process.”

Later in the meeting board member Anne Erickson came back to the issue of maintenance. “Our buildings are in the condition they are not because we haven’t been doing maintenance,” she said. “I don’t want it to be a perception in the community that we have neglected the buildings. We have not been negligent.”

Although the district has chosen to take a different route than the state’s initial recommendation of building all new structures, Basora said that it has not given up on seeking state funding. “Instead of us rejecting the state, we’ll wait for the state to reject us.” OFCC officials have said that funding was most likely contingent on following its recommendations.

“At the end of the day, we’re trying to deliver the plan that the community needs,” he said. “The community doesn’t feel we need to pursue all of the things” outlined by the OFCC.

If voters approve the May 8 ballot request, the district will begin work by finalizing the design and engaging a construction manager, Basora said in an email this week. “The first year after passage is usually planning. Then there is typically two years of building. So we are likely to be finished in the summer of 2021.”