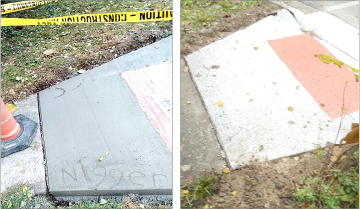 A newly poured concrete curb along West South College and Wright streets was defaced with a racial slur on Oct. 30 (left), and was smoothed over before it set completely (right) by a worker. (Photos Submitted by Kevin McGruder)

The persistence of Racism InYellow Springs

This article is first in a series that will address racism in the village and efforts to improve the climate of diversity and inclusion at local institutions.

Note: This article includes a potentially disturbing image of a racial slur.

Last month, a newly poured block of concrete was defaced with a racial slur — the N-word — at the corner of Wright Street and West South College Street.

Before the concrete dried, it was smoothed over by the construction crew, so that by the next day the word was gone.

Although the new, accessible crosswalk no longer carries the racist insult, its brief existence highlights the persistence of racism in Yellow Springs, according to several villagers interviewed this week.

Kevin McGruder, who was given a snapshot of the hurtful message before it was erased, decided to share the image to point out an overt act of racism in a progressive community many think has moved beyond racism.

McGruder, who is black, also hopes the incident challenges local white people to become more outspoken against racism when they encounter it here.

“There’s a difference between being sympathetic and empathetic and being anti-racist,” McGruder said. With sympathy and empathy, “you might feel bad when things happen to black people, but you’re not doing anything to change it.”

McGruder, an Antioch College history professor, was initially unsure about how the image would be perceived, but shared it because he felt it could be a “teachable moment.”

“It is my concern that people who think racism doesn’t exist would see this as whining by over-sensitive people,” McGruder said. “But I hope this could be an opportunity to explore why somebody would do this.”

To Yellow Springs High School sophomore Annlyn Foster, the sidewalk slur proves that racism is alive and well in Yellow Springs. In a strange way, “to have the image out there” is empowering, said Foster, who is black.

“People in my school are ignorant — they don’t think racism is still going on,” she said. “There was always racism — for 400 years — and now we’re still going through racism.”

Foster added that the ignorance on display in such racist acts needs to be addressed head on rather than brushed over. She said she has witnessed this tendency among her teachers when a racist comment is aired in class, for instance.

“We need to address where the ignorance comes from instead of saying, ‘let’s move on to another topic,’” Foster said.

Foster has helped bring such issues to light through her involvement with the United Students Society, which was reactivated three years ago at Yellow Springs High School to address issues of race, and the Young People of Color group of the The 365 Project.

The racial slur was written into the concrete curb ramp on the afternoon of Thursday, Oct. 30. According to Village Public Works Director Johnnie Burns this week, the Village was not notified of the incident immediately.

Burns later learned from Xenia-based contractors working for the Ohio Department of Transportation that they saw the racial epithet when they were finishing their work for the night, and were able to rub it out before leaving.

“They did inform the state inspector but failed to tell Village because they work for the state,” Burns wrote in an email this week.

Burns was told the timing of the defacing coincided with the end of the school day, when many young people are walking that route home from school.

While there is no evidence it was done by a local youth, what is clear to McGruder is that the contractor who noticed and immediately repaired the sidewalk saved local students from a painful encounter.

“Thanks go to the concrete worker who came back and restored the concrete to its original state, and alleviated the prospect that middle and high school students would witness this on their walks to and from school,” McGruder wrote in an email.

Nationally, hate crimes were up 17 percent last year, according to figures released by the FBI this week. Anti-Semitic hate crimes are growing the fastest in the U.S., while those targeting African Americans remain predominant. The three-year increase in hate crimes coincides with a corresponding rise in hate groups, according to a report from The Southern Poverty Law Center earlier this year.

“That’s what allows [white nationalists] to suggest that they are promoting a race war, because they think the only people countering their racism are black people,” McGruder said.

“In Yellow Springs, we need to step up,” he said.

Erin Rodgers and MJ Gentile agree that they, as white people, have a responsibility to speak loudly and clearly against racism, especially as racism becomes more overt under the current president, they said. They were disgusted — but not surprised — about the sidewalk defacing.

“Racism is everywhere — Yellow Springs is absolutely no exception,” Rodgers said. While at her work outside the village she commonly hears “extraordinarily racist” comments; in the village, racism is more “low-key and latent,” but still there, she added.

Gentile said that white people shy away from conversations about race because they are uncomfortable, but that she hopes this incident, and other recent conversations about the unequal treatment of black residents by local police, spurs more dialogue.

“I think we need to have courageous conversations to get to know each other and trust each other,” Gentile said.

Among the local organizations that host such conversations are The 365 Project, which, in conjunction with the Yellow Springs Havurah, is launching a new series of Courageous Conversations. The discussion groups — made up of eight to 12 people and two facilitators — will run for six sessions starting in early 2019.

According to McGruder, who is a part of The 365 Project, the discussions will focus on “learning about one another and our differences” as well as “how we build a strong community base upon those differences.”

“The purpose is not to come up with answers, but to understand each other,” he said.

Gentile is also involved in one of several local support groups active in the village through Be Present, Inc., a Georgia-based nonprofit whose mission is to create a diverse network of social justice leaders by strengthening “individuals’ self-knowledge and capabilities to consciously listen and act in all aspects of their lives,” according to its website.

For Council member Kevin Stokes, who ran on a platform of improving cultural competency in the village, the work to shine a light on the subconscious racist beliefs of those who live and work in the village is just beginning.

But first, villagers have to admit that there is a problem and be willing to put in the hard work. He said he hopes to “burst the bubble” that we live in a post-racial society.

“There are lingering effects of racism and slavery here in America,” Stokes said. “I just want people to be in reality and not in la la land.”

When culturally competent, Stokes added, “we know we are different, we appreciate the difference and we moderate our behavior so no harm comes.”

Stokes pushed for, and helped organize, an initial implicit bias training for all Village staff and elected officials this fall. But the work must continue, he said, since such trainings aren’t effective when they are “one and done.”

While the racial climate of Yellow Springs may be improving, he said, incidents such as a the sidewalk defacing show that the village is not “Mayberry.”

“We are subject to external influences, over the airwaves, the Internet and those that come to live here from elsewhere,” he said. “But we’re also not just another community that has its problems,” he added. “We should keep trying.”

Reflecting on the slur written in the sidewalk, McGruder said that while the motivation for the racist act may never be known, he believes there was reason.

“It may sound like an exaggeration, but there is a reason — they wanted to inflict some pain in a secretive way, maybe to make themselves feel better about who they are and the power they had.”

And had the concrete worker not smoothed the sidewalk, “it would have been a permanent marker,” he said.