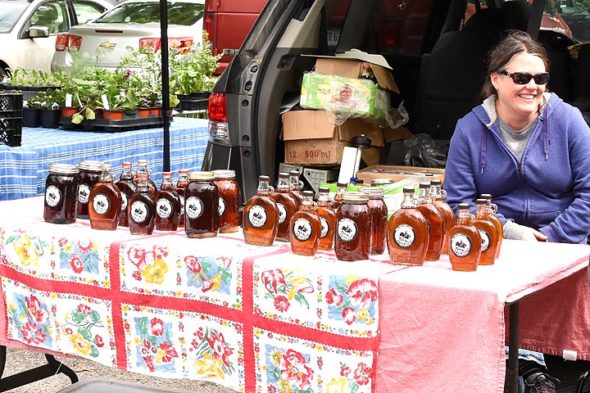 This is the fourth and final article in a series on area farmers who grow for the local food system. Click on the links below to other articles in the series.

The last 12 months have been the wettest on record in Ohio and the U.S., according to the National Oceanic and Atmospheric Administration.

For the state’s farmers, the constant rain and soggy soils has meant delayed planting, fallow fields and lower yields. Local corn is not likely to be “knee high by the Fourth of July.”

Along with large commodity crop growers, small-scale farmers growing for local markets are also struggling. Crops that should be coming in now, like squash and carrots, are not yet ready, or less abundant than usual, reflected local farmer Michele Burns this week.

At her Flying Mouse Farms on Fairfield Pike, cool temperatures have slowed the growth of tomatoes and peppers, and potatoes and onions might rot in the saturated ground. At the Yellow Springs Farmers Market, which Burns runs, some farmers are nervous.

“Everyone has a general sense of uncertainty about what’s actually going to make it,” she said.

But farming’s a “risky business,” Burns said, a fact farmers are well aware of, and realistic about.

“We know we don’t have control over the weather, so you can’t worry about it,” she said. Instead, Burns and her husband, John DeWine, have diversified.

“We spread our risk over the years by getting into livestock, maple syrup,” Burns said. “If you’re only doing produce it could be trickier.”

Over the last few weeks, the News interviewed farmers who raise livestock and grow produce for the local market. They spoke to the joys and challenges of farming, both brought into sharper detail with this season’s stormy weather.

This week, the News covers what local organizations are doing to grow the local food movement.

The role of the YS Farmers Market

For many villagers, the Yellow Springs Farmers Market on Saturday mornings is their source for locally-sourced produce, eggs, meat, flowers and more.

Burns, who started coordinating the market a decade ago, believes the local market is key to the local food system, and to building a sense of community with local growers.

“It’s good for the community to interact with a farmer who is providing them food,” Burns said. “It’s where people can talk to farmers.”

Vendors have to grow or make the products themselves, and the products must be agriculturally based, according to the market’s rules. That keeps it from becoming more a “craft market,” Burns said.

A staple of village life, the local farmers market was started well before such markets became en vogue in the 1990s. Past News articles date the market’s genesis as in the late ’70s or early ’80s, by the late villager Roger Hart.

But despite its central, and longstanding, role in promoting local food, attendance at the farmers market has dropped  in recent years, Burns said.

“The population of customers has drastically been reduced in the last five years,” she said. “It’s dramatic.”

The line for Peach Mountain’s organic fare used to stretch down the market’s center aisle “seemingly forever,” but now is no longer there, Burns added.

In another worrisome trend, market-goers also spend less time hanging out and chatting. Burns was at a loss to explain the smaller, less engaged crowds. But to her, it’s a simple way to get more support for farmers and their food.

Along with preserving area farmland, the Tecumseh Land Trust also took up sparking the local food movement as their charge about a decade ago.

The goal was to help farmers get more value for their crops, TLT Executive Director Krista Magaw said recently.

“They basically get 9 to 10% of the value of their product at best,” Magaw said. “But with organic sales, and direct sales, it’s possible to capture more of the money for the producer.”

In one tangible project, TLT, in collaboration with Community Solutions, helped set up an EBT machine at the farmers market, so that customers can now use food stamps for fresh, local produce. That was a win-win for farmers and customers.

TLT also explored a variety of strategies, from community kitchens to farm-to-school lunch programs. Despite the myriad opportunities, progress was elusive. The reason? Much local food infrastructure is lacking, Magaw said. In some ways it’s a chicken-and-egg problem.

“You have to have the infrastructure to process that food and market it,” she said. “We learned a lot about what are the limits of local without that deeper infrastructure.”

A “deeper infrastructure” might include grain processing and flash freezing facilities. What’s also needed are organizations to mediate between farmers and places like restaurants, grocery stores and large institutional buyers like schools and colleges, Magaw said. Contracts with large institutions, she believes, are essential.

“Once you get to that point where you have the captured market, it makes it viable to have [food processing] facilities,” she said.

Talk about starting a food incubator or community kitchen here has gone on for years. But Magaw now believes that the village might be too small to sustain it. Space is still available at incubators in nearby Fairborn and Springfield, while she has seen many incubators fold without a market.

There are some bright spots in the local food scene. In addition to the weekly year-round farmers market, Tom’s Market is increasingly stocked with local food. Local tomatoes, corn, eggs and lamb are a few seasonally available options at the independent grocer. Plus local restaurants Sunrise Cafe, Calypso Grill and the Winds Cafe all prepare dishes with some local ingredients.

But it could be easier for local restaurants and stores to carry local food if they didn’t have to coordinate with each grower separately, Magaw said. Instead, an aggregation service could help buy from local growers and sell to local firms, especially big buyers.

“I would hope that kind of aggregation piece is something we make progress on in the next 10 years,” she said.

Another local land trust, B-W Greenways based in Fairborn, is also involved in promoting local food. For the last eight years, it has produced a local food directory, helping to connect customers to local farms, restaurants, farmer’s markets, bakeries, breweries and more.

For Matthew Lawson, a village resident and the group’s new executive director, it makes sense for those interested in conservation to support local farmers.

B-W Greenways, named after a greenway corridor it seeks to preserve between the Beaver Creek and Wenrick wetlands just north of I-675, sees the direct impact to wetland health from buying local. When consumers create a market for healthy food grown with more ecologically-friendly practices, they can impact what happens on farms, he explained.

“If we can have stronger agricultural practices, we’ll more likely be able to preserve these wetlands adjacent to farms,” he said.

After all, wetlands can hold large volumes of water, forestalling the flooding of nearby farm fields, Lawson added. With 95% of Ohio original wetlands destroyed, this year’s rain is more harmful to local agriculture than it could be, he said.

The wet weather of the season, despite its difficulties, is also an opportunity to raise awareness of the need for a more sustainable food system, Community Solutions Executive Director Susan Jennings believes.

“This shows how fragile our food system is,” she said.

Bad weather, possibly made worse by climate change, is not the only difficulty farmers face, Jennings added, pointing to declining net farm income and high levels of debt among farmers.

“Right now, all of the power is out of the farmer’s hands,” Jennings said.

Farm debt is at its highest level since the farm crisis of the early 1980s, while net farm income is forecast to be 49% lower at the end of 2019 than it was six years ago, according to the latest data from the US Department of Agriculture’s Economic Research Service.

But the tough season may also turn out to be an incentive for farmers to “do different things,” Jennings said. And with a little support, farmers, who are already a creative and adaptive lot, might embrace a turn toward organic and local food, she said.

“Farmers can’t afford to bet the farm on transition,” Jennings said. “If we care about our community’s resilience, we have to support farmers. It’s not just a farming issue, but a community issue.”

Jennings sees her organization as helping erect four pillars of a local food system — creating infrastructure for processing and distribution, making farmland accessible and affordable to farmers, building demand for small-scale and institutional buying and leveling the playing field by addressing farm subsidies.

“They all need to happen simultaneously,” Jennings noted.

At Community Solutions’ Agraria farm, small-scale organic growers are experimenting with growing grains and vegetables with fewer inputs while restoring healthy soils. As for the market, Jennings believes consumer demand is high, pointing to the fact that the U.S. now imports more organic food than it exports.

Jennings sees opportunity in a state where just 8% of food eaten here is grown here, despite the fact that agriculture is Ohio’s No. 1 industry. She said Ohio ranks 33 out of 55 states and territories on the “locavore index,” with much room for growth. And despite an industry talking point, Jennings believes that industrial agriculture isn’t needed to “feed the world.”