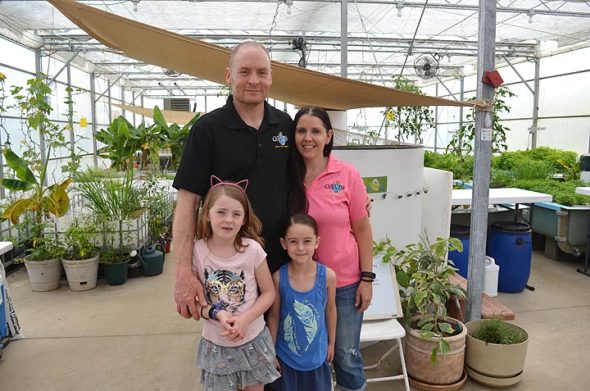 Kimball and Stephanie Osborne, with their children, Elli, left, and Alina, in the lush greenhouse at Oasis Aqua Farms in Beavercreek Township last month, before the tornado hit their property. (Photo by Megan Bachman)

A new farm is hit with tragedy

This is the second in a series of articles on area farmers who grow for the local food system. Click on the links below to other articles in the series.

Summer production was coming on at Kimball and Stephanie Osborne’s Beaver Valley Road homestead, which the couple had spent three years turning into a year-round aquaponics farm.

Spinoza’s Pizza at the Fairfield Commons Mall was buying the farm’s lettuce and basil, and customers were dropping by to pick up bags of fresh vegetables and around 20 to 40 dozen eggs per week.

Outside the greenhouse, bees were buzzing in their hives and recently planted berry plants and fruit trees presaged future growth.

Then came the tornado.

Close to 11:30 p.m. on May 27, a tornado ripped through the 7-acre farm. The tornado — which was at least an EF1 with winds reaching 86 to 110 miles per hour — tore down barns, snapped trees and decimated the greenhouse.

In the end, five barns were destroyed, including one possibly built before the Civil War, along with the greenhouse and other farm infrastructure and equipment.

Kimball Osborne said it could have been worse. Of the herd of sheep, more than 200 chickens and over 1,000 fish, only four chickens died that night, along with many fish. And the 19th-century farmhouse, where the couple and their two young children spent a terrifying night hunkering in the cellar, was also spared. 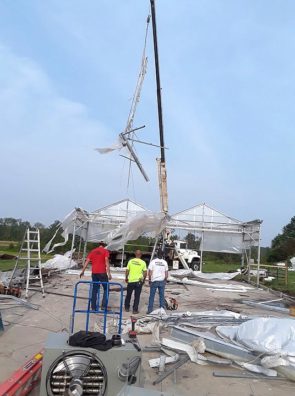 Still, the damage to the farm his family had invested years of hard work and thousands of dollars in was hard to take.

“You put your heart into something,” he said of the loss.

Then came the help.

Friends and strangers alike began stopping by with offers to help or gifts of cash. By four days after the storm, more than 100 volunteers had come out to dismantle building remains, clean up the mess scattered across the property, lend equipment and supplies and offer food and water.

What Kimball Osbone thought might take a year to clean up was getting done in a matter of weeks.

The couple’s children, Elli, 7, and Alina, 6, were scared on the night of the storm, then sad to see their outdoor playground equipment destroyed. But soon they were having fun again.

As for the farm, a GoFundMe page is now up with donations streaming in to help the couple rebuild, if they ever can.

An initial insurance assessment revealed the likelihood that insurance will only cover some debris removal, and not the cost to take down ruined structures or rebuild, Kimball Osborne reported.

“I want to build again, but we never really made money,” he said.

“We’ll be OK but probably won’t be able to rebuild everything,” he added.

“Kimball and Stephanie have poured their whole hearts into this dream and need your help to literally build it from the ground up again,” the description says.

The dream of Oasis Aqua Farm

Farming was a new venture for the Osbornes, but one which they both immediately loved.

Stephanie Osborne found she had an affinity for chickens. The broods began to multiply, spreading out in the large barn, with younger chicks well cared for in their own buildings. They have 10 to 15 different breeds in all.

A former nurse, Osborne began staying at home to take care of both children and animals. The children grew fond of the animals too, as evinced by the names of the sheep — Tinkerbell, Dr. Pepper, Brownie Sprinkles and Rainbow Lemonade, to name a few.

Kimball Osborne grew up on a grain farm in Utah, and remembers eating fresh corn and tomatoes from a half-acre vegetable garden on the property. Living abroad also opened his eyes to local food.

“I lived in Taiwan a year, so I know what real food is supposed to taste like,” he said.

When the couple bought the farm in 2016, Kimball kept his job as a civilian cost analyst at Wright-Patterson Air Force Base, but began to dabble in agriculture, or more specifically, aquaculture.

Kimball Osborne read about the innovative method for growing food without soil — known as aquaponics — and decided to give it a try.

While hydroponics involves growing food in water and aquaculture is fish farming, aquaponics combines both.

The result is a symbiotic system in which nutrient-rich fish waste feeds plants, and plants pull waste from the water before it becomes toxic.

Osborne is seeing the benefits of the mostly closed-loop system, which only requires the addition of some nutrients but no additional fertilizers or any pesticides.

“Once we have the nutrients in the right balance, we are good. Bugs attack sick plants,” he said.

While soils have been continually depleted by agricultural practices, an aquaponic system instead relies on balancing nutrients like nitrogen, potassium and magnesium to feed the plants.

“We’re putting on what the plants need to grow,” he said. “It is excellent produce, it’s just getting the balance right.”

There’s another benefit to growing plants directly in water, which is continually aerated so the plants can breathe.

“We’re not fighting weeds,” he said.

The system was a massive investment. Osborne built a 2,500-square-foot greenhouse with radiant floor heat and bought a wood-fired boiler to help heat it. Then, he purchased two 3,500-gallon tank and trough systems from an Indiana inventor and filled it with 1,300 yellow perch.

After some trial and error, the system was working well, although monthly electricity bills in the winter were reaching more than $500.

“It’s not a cheap way to grow, but it is an efficient way to grow,” Kimball Osborne said.

He was pleased with the taste, freshness and health value of his products. While food in the U.S. travels an average of 1,500 miles away and loses its taste and quality along the way, the Osbornes were told by customers his greens stayed fresh for weeks. One customer with a bowel disease swore by the healing nature of the farm’s greens, Kimball Osborne relayed.

“I believe in the power of fresh food,” he said.

It’s been a learning experience for Osborne, and humbling.

“There is so much to learn — medicinal properties of plants, eating healthy,” he said.

More recently, the couple expanded their outdoor garden, where summer squash, cucumbers and tomatoes were coming up last month. They bought a herd of sheep, “for lawn mowers.” They were having fun growing tropical plants like avocado, papaya and banana in the heated greenhouse. They started a share program similar to a CSA subscription. An intern pursuing a career in water quality was regularly volunteering. And they were soon going to stock a tank with crayfish, and sell what is sometimes called freshwater lobster.

The next article in the series will feature a longtime local CSA and its new herb shares.