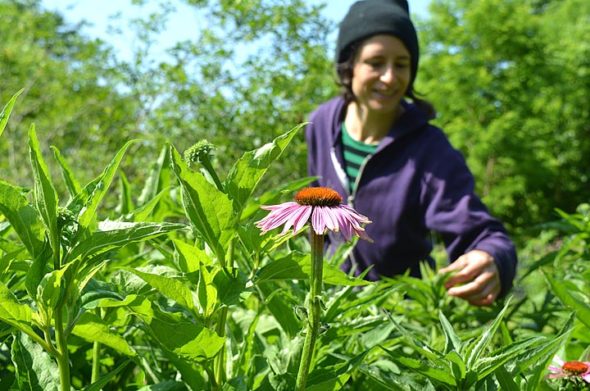 This is the third in a series of articles on area farmers who grow for the local food system. Click on the links below to other articles in the series.

Last Thursday was harvest day at Heartbeat Learning Gardens. A produce stand overflowed with lettuce, bok choi, endive, zucchini, celery and more, while share members picked their own strawberries and hauled away garlic scapes by the crateful at the four-acre farm on Hustead Road north of Yellow Springs.

While harvest day always has an air of celebration, last week’s was “bittersweet,” in the words of longtime volunteer MJ Gentile.

It was the first harvest of the first season without Terry Snider.

“It’s been a big adjustment,” said Andrew Manieri, who founded the farm in 2005 and worked closely with Snider until his death in December.

Snider’s bike was brought out for the occasion, and rested against a tree while share members came and went, its signature white bucket still affixed at the rear.

Those buckets of food scraps Snider collected around town were destined for Heartbeat’s compost heap, after all. It’s a gift that keeps on giving, and one that Manieri doesn’t want to use up too quickly.

In other ways, Snider’s presence isn’t going anywhere, he reflected.

“Terry’s contribution over the years is  still present,” Manieri said. “His attitude, that he brought here has taken root and grows here. It’s not gone.”

Heartbeat is in its 14th growing season, and as with all natural systems, new life succeeds death and growth and change accompany the familiar.

What’s the same is the Community Supported Agriculture, or CSA, subscription model, in which CSA members pay up front for a weekly “share” of the harvest, June through October.

What’s new for the non-profit educational farm is the launch of an another venture — Community Supported Apothecary.

“Herbs have always been the community’s medicine,” Nicole Manieri said. “In concert with food, they are how we care for ourselves and our families.”

Accompanying the herbal products will be guides on the health-enhancing virtues of the plants and how to use them. The focus, Manieri said, is on empowering people’s health and not on treatment through herbalism.

“While the healthcare system we have gives us valuable options, there is a place for preventative, ongoing health practices where herbs shine and we can feel more agency,” she said.

Manieri was sipping on her morning juice of plantain, red clover, dandelion, rose and nettle. Harvested a few hours earlier, the mineral-rich beverage is a tonic that supports the tissues, heart, endocrine system and more, she explained.

“I see it as my multivitamin,” she said.

Manieri has studied integrative nutrition, and since 2008, has been learning about and making herbal preparations.

Herbs not grown at Heartbeat, or harvested through “carefully sourced wildcrafting,” will be purchased from ethical  sources, Manieri added.

Working with herbs has been empowering, and is a passion she looks forward to sharing.

“It feels like an untapped abundance,” Manieri said of weeds surrounding human society. “People struggle with digestive and liver issues, and we have dandelions everywhere. Nettle is a local superfood.”

To Manieri, that relationship inspires awe.

“The plants know how to get the energy from the sun and the minerals in the soil and make it available to us,” she said. “It’s all such a gift.”

The herbshare program runs from the last week of July through December, and three- or six-month subscriptions are still available. 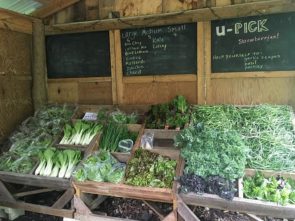 The first harvest at Hearbeat Learning Gardens featured a variety of vegetables, herbs, u-pick strawberries and all the garlic scapes one desired. The CSA, in its 14th season, is also an educational farm. (Submitted Photo By MJ Gentile)

In his 20 years of farming, Andrew Manieri has seen a lot. But rarely has he seen this much rain.

“There’s a lot of food here, if it can just dry out,” he said looking over his fields.

This year’s constant rain has meant saturated ground and a challenge “just getting the plants in,” in Manieri’s words.

“It’s the intensity of some of the rain as well,” he said.

That day, Manieri was putting in the eggplants and peppers, which in a normal season would’ve been planted much earlier.

From January through May, the Dayton International Airport measured more than 23 inches of precipitation, about six inches more than normal, according to National Weather Service data. Wet weather has stalled conventional farmers, too. The Dayton Daily News reported that just 50 percent of the state’s corn and 32 percent of its soybeans were planted, as of last week.

Weather has long loomed large in the lives of farmers, but with climate change, it seems to be getting more unpredictable and extreme, Andrew Manieri said.

“Farmers are on the front lines of climate change,” he said. “I have to accept it and adapt.”

Adapt, he has. When Heartbeat moved three years ago to its Hustead Road location from Swimming Pool Road east of the village, Manieri found rich soils but a water-logged garden. So began a multi-year efforts of digging drainage ditches and building raised beds, a strategy now starting to pay off.

The CSA model is another buffer.

“We’re always adapting to new challenges, but it does take the commitment from people to stick with you,” he said.

This year the CSA has 20 shares, smaller than it has been. Instead, more produce is being donated to a soup kitchen in Springfield and to feed refugees living in Dayton.

“That’s an aspect I love being able to contribute to — access to fresh food when so much is canned,” Manieri said of food pantries and soup kitchens.

Over the years, Heartbeat has ranged from 20 to 40 shares, with about 80 percent of the farm’s members hailing from Yellow Springs.

In that time, Manieri has witnessed the popularity of local food wax and wane.

“The local food movement has grown and plateaued,” he reflected. “A popular book comes out, and we get a huge windfall of new members and only a percentage stay.”

Manieri added that he values long-term relationships with members.

“We are very grateful for the members who have been with us for over a decade,” he said.

Currently, there are two CSAs that serve the Yellow Springs area, but Heartbeat is the only one that grows food nearby, about four miles away. A Dayton-based CSA also delivers to the village.

There are an estimated 13,000 CSA farms in the U.S., a number which has leveled off in recent years. Meanwhile, the more than 8,000 farmer’s markets are also slowing after two decades of rapid growth.

Still, the CSA model is a viable one, Manieri said. It eschews the transactional relationship and forges stronger connections between farmer and fed, and between the member and the farm. One finding has been that when a member picks up a share at the farm, that member is more likely to renew the following year.

“A part of it is an engagement with the landscape,” he said.

A few years ago, Heartbeat became a 501(c)3 and staked out an educational direction. Workshops in home horticulture, permaculture, kitchen apothecary “craftshops” and more are planned.

“It’s very different than most gardens,” Andrew Manieri said. “The garden beds are every bit a part of wild nature as the land around them.”

Manieri practices a small-scale, low-input style of farming that he prefers to call horticulture, and one that enhances biodiversity. For instance, keeping wild areas limits erosion and creates habitat for native pollinators and the insect predators to keep pests away.

“Even the weeds I see as a resource,” Manieri said. “We just have to manage it so our crops come out on top.”

“There’s photosynthesis everywhere,” he said, looking around at the gardens. “And as much carbon sequestration as possible.”

“Our goal, like most farms, is that the soil improves every year,” he added.

The wildness has another benefit.

“It appeals to my sense of aesthetics,” he said.

Meanwhile, the couple’s 10-year-old son, Gabriel, is passionate about protecting land for wildlife, and has certified several areas of the farm as wildlife habitat. Those, in turn, support the gardens, Andrew Manieri reflected.

“We are practicing how to conserve things in use, so there are ways to work together, he said.

Also growing at the farm are a second brood of chickens, a third beehive —  added after a spring swarm was caught on the property — and spores of reishi, lion’s mane, oyster and shittake mushrooms on newly inoculated logs.

Two farm interns are busy working and learning, and classes in permaculture and herbalism are planned for later this season.

As for any new crops, there’s pink celery.

“I’m trying to think of ways to get people to eat celery,” Andrew Manieri joked.

Living and working on the farm has been a rich experience for their family, the Manieris reflected. For Nicole Manieri, working closely with the natural world grounds her in chaotic times.

“The natural world has seen so many changes, that when I connect to that, I feel resilient,” she said.

And it’s good work, she added.

“It’s just needed. We need to feed and heal ourselves, and each other. That never changes. And we are learning how to do that in a way that contributes to life thriving.”

* For more information, or to sign up for an herbshare, email Nicole Manieri at singingnettleherbs@gmail.com or visit https://heartbeatgardens.com.

* The reporter is a member of the board of Heartbeat Learning Gardens.