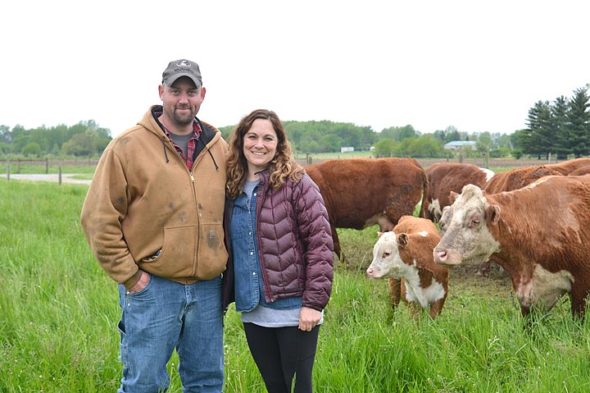 Scott and Jillian Marshall are in their seventh year of raising beef cattle at their West Jackson Road farm a few miles northeast of the village. The local farmers — who still have their day jobs — love caring for the cows, teaching their children about the cycle of life and serving customers with antibiotic-free, mostly grass-fed beef. (Photo by Megan Bachman)

Growing local—Coming home to their cows

This is the first in a series of articles on area farmers who grow for the local food system. Click on the links below to other articles in the series.

Only eight percent of what Ohioans eat is produced in the state.

That statistic, presented at last year’s Montgomery County Food Summit in Dayton, reveals a truth about the state’s food system — that although agriculture is Ohio’s No. 1 industry, most of what is grown in the state is not consumed here.

But there are some area farmers working to grow that figure, and some local nonprofits aiming to help them.

For Tecumseh Land Trust’s Executive Director Krista Magaw, helping farmers connect with their local market is a way to boost their profit in a tough agricultural economy.

“Farmers get 9 to 10 percent of the value of their product — at best,” Magaw said this week. “That’s not great.”

The challenge is especially stark this season, with soggy fields thwarting farmers, Magaw added. Last week, only 22 percent of Ohio’s farm fields were planted, and many may stay fallow; June 6 is the last day to get the crops in in order to qualify for crop insurance.

“This is a miserable year,” Magaw said.

“Our food system is very fragile,” she said.

With a trade deficit in organic food and consumers demanding local, the opportunity exists for local farmers to make a change, Jennings added. 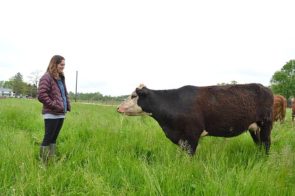 Jillian Marshall in the field with one of her cows, who came up to greet her. The family farm is on West Jackson Road. (Photo by Megan Bachman)

“It’s totally false that you can’t feed the world with organic production and small-scale farming,” she said.

In the coming weeks, the News will profile local farmers who produce food for their local communities, and the groups exploring ways to grow local food in the region.

Jillian Marshall said she should have known that farming would be in her future when the first date with her now husband, Scott, involved erecting a fence.

“I never thought I’d be putting together rebar for a date,” she joked recently.

A project manager for a building company and a nurse, the couple is now in their seventh year of raising beef cattle at their West Jackson Road farm in southern Clark County.

It’s a growing operation for a family with an obvious affection for their land, and their cows.

The Marshall family’s foray into farming may have been predictable, but the income is not. For now, they’re keeping their day jobs while learning about animal husbandry.

“We still don’t make money off of it now, but we will,” Scott Marshall said while walking in the 25-acre pasture where 60 cows and calves snacked on mineral feed and grass. 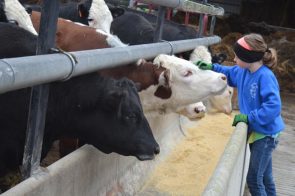 Kate Marshall pet some cows as they finished on grain. The seven-year-old loves caring for the animals — it’s hard to get her inside. (Photo by Megan Bachman)

The Marshalls are not alone. Currently, 84 percent of family farms are only surviving because of a household member’s off-farm income, according to USDA statistics.

Although it will be nice when they can pay off their initial investment in fences, pens and equipment, the immediate satisfaction is watching their children, George, 3, and Kate, 7, play in the fields, the couple said.

“That’s half the reason I do it,” Scott Marshall said. “It teaches them about life.”

On a recent visit to the farm, George proudly sped around in his John Deere tractor power wheels, while Kate petted cows and swung on livestock gates. The day before, while Kate was hanging upside down on a tree branch, a cow came by and playfully nibbled her hair.

“They’re very friendly,” Jillian Marshall said of the herd, made up of Herefords, a docile breed. As for Kate, “it’s hard to get her inside,” her mother said.

Kate named the herd bull Mr. Moo, feeds the cows what she calls “hay sprinkles” and occasionally reads to the animals, who seem curious about what’s happening.

“They sit and stare at her,” Jillian Marshall said.

It’s also been a lesson in the cycles of life. Asked whether it’s hard to see the animals go to slaughter, Kate responded that it’s OK because she likes meat — especially steak.

Compared with the commercial alternative, the Marshalls’ cows are treated well. They roam the wide pastures, rear their young and are almost entirely grass fed, living about 14 to 15 months.

“I take good care of them,” Scott Marshall said. “They usually eat before I eat.”

Although organic certification is prohibitively expensive (and certified organic beef processors are hard to come by in Ohio), the Marshalls model their operation after the organic standards. They don’t use antibiotics or artificial growth hormones and graze their cattle on pasture not treated with chemicals.

Customers say it’s nice to know the source of their food, according to Scott Marshall.

“I think it’s good to know where it is coming from and where they lived,” he said.

Customers reserve their “share” of a cow with a deposit in the spring. They then pick up their cuts of beef in quarter- or half-cow quantities sometime in June at an old country butcher, J&L Farm Butcher Shop in Medway. For now, the couple is marketing only via word-of-mouth, but hopes to someday serve more customers and possibly some local restaurants as well.

Turning toward farming was, in a way,   coming home for Scott Marshall. The couple re-purchased his grandparents farm, where as a kid he would help care for their six cows or doze under a bank of willows.

At one point, the farm was likely a small dairy, Scott Marshall believes, pointing to the 100-year-old post-and-timber barn still on the property. Growing up nearby, he remembers when many small dairies dotted the county, and he watched as they nearly all closed, with the exception of Young’s Dairy, which no longer sells raw milk, but produces cheese from its cows.

“You go to the store and see milk for $1, so I don’t know how you compete with that,” Scott Marshall said.

Clark County is still largely agricultural, with 86 percent of the land in production, according to the 2012 USDA agricultural census. However, in a 2017 update, figures for milk cows, vegetables and fruit in the county — which could be assumed to feed a local market — are all so small that figures were not reported to protect the data of individual farmers.

While neither of their parents farmed, Scott Marshall’s uncle and aunt have become prominent local food producers with their Rue Farms Rustic Potato Chips company. They started making chips on their Clark County farm before moving to a facility along US 68. The chips are now sold in seven states.

Even while starting his career in construction management, Scott Marshall couldn’t get away from farming.

The family did receive some support along the way. A USDA grant for equipment geared toward young farmers (they are both 36) was helpful. And on many occasions, the late local veterinarian Dr. Scott Hoskett would come to not only treat a sick cow, but teach the Marshalls how to do it themselves.

One of the lessons they learned was to not interfere with the calving.

“The less you interfere with the natural processes, the better,” said Jillian Marshall, who brings her own medical experience working in the ICU at Miami Valley Hospital.

But caring for animals on the farm is far different from her work in the hospital environment, she reflected.

“It’s nice to just be out here and, even if you’re working, it’s at a slower pace,” she said.

Scott Marshall agrees with the change of pace.

“At the time when I started, I was working in a building in downtown Columbus,” he said. “I like being outside.”

In addition to enjoying being out with the animals, Scott Marshall said he and his daughter also share a particular fondness for the smell of the farm.

“Kate and I are weird because we like the smell of manure,” he said.