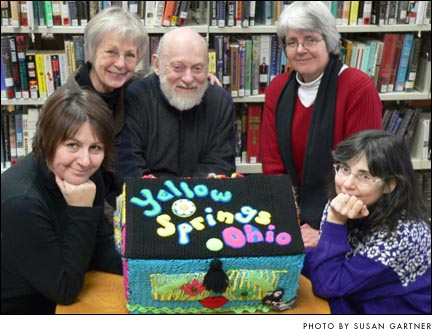 StoryBox Project ambassadors, from back, left to right, Jonatha and Harold Wright and Yellow Springs Community Library Head Librarian Connie Collett pose with the Yellow Springs StoryBox box, created by Corrine Bayraktaroglu (front, left) and Nancy Mellon. Submissions for the StoryBox project can be put into the box, on display at the library, until April 30.

Traveling tales in the ‘Box’

Children aren’t the only ones who appreciate a well-told story. Bedtime stories, love stories, scary stories told around a campfire, folk and fish and fairy tales have, since human life began, entertained and educated young and old alike.

“No matter who you are, you have a story to share,” said professional storyteller Kevin Cordi in a recent interview. He is the country’s first full-time high school storytelling teacher and is currently serving as academic storyteller-in-residence at Ohio State University — a first for OSU.

Cordi, who is from Uniontown, Ohio, is also creator of the StoryBox Project, which he began in 1995 as a way to encourage children and adults from around the world to create their own stories and share them with one another. Each year, Cordi sends one large decorated StoryBox around the world. The StoryBox travels from place to place for 12 months, collecting stories at each destination, before returning home to Cordi.

At each destination, the StoryBox is opened and its contents shared (typically at a storytelling event or “concert”) by volunteers who read the collected stories. More submissions by various groups, schools, and individuals are put into the box, which is then re-packaged and shipped to its next destination.

The box is first circulated around various cities in the U.S., then shipped to other countries. Past boxes have been to China, Poland, Brazil, Argentina and Alaska.

This year, Cordi decided to do something different. With the participation of OSU’s Multicultural Center, there will be 50 different StoryBoxes starting out at 50 different sites. Each of the sites will have a story ambassador who oversees the creation and appropriate location of each box, and plays host to two storytelling events as a way to share collected stories and encourage more submissions.

One of those sites will be Yellow Springs.

“Kevin and I have been in many [storytelling] groups together,” said Jonatha. “He’s put an article in the book I’m editing, which is coming out some time in spring.” The book, Team Up! Tell in Tandem, is a how-to book for those who want to become storytellers in tandem, a technique used by the Wrights.

From now until the end of April, the Yellow Springs StoryBox will be on display at the library. Stories, three pages in length or less, can be dropped in the box during library hours. This year’s theme is peace and conflict resolution. However, all topics are welcome. Reminders and story prompts will be posted each week in the Emporium’s window and by the StoryBox itself. Blank paper will also be available next to the StoryBox.

“People can just stand right there and write a story down!” said Jonatha.

In May, the Yellow Springs StoryBox will be exchanged with a box from another city. These new stories will be shared at a local concert in the village while that city will host a concert to tell Yellow Springs stories.

In June, all the StoryBoxes will be sent to Ohio State in Columbus and a story from each box will be presented at the first Ohio State Storytelling Festival and Global OSU StoryBox Launch, June 3–4. Ambassadors Jonatha and Harold will read the selection from the YS StoryBox. Afterwards, all 50 boxes will travel around the world, including Northern Ireland, Singapore, Nicaragua, and Japan and new stories will be added. The StoryBoxes will return one year later and the celebration will begin again.

In an effort to put a distinctive Yellow Springs “stamp” on the project, Knit-Knot Tree creators (and Dayton Street “textile totem” artists) Corrine Bayraktaroglu and Nancy Mellon volunteered to design the village’s StoryBox. Using laminated pages from the Yellow Springs News to line the inside of the box and incorporating felt, buttons, and yarn (including handiwork from the Knit-Knot Tree) on the outside, the finished box is a story of its own and the perfect vessel to carry the village’s voice, they believe.

For more information about Kevin Cordi and the StoryBox Project, go to http://kevincordi.com/storybox.htm. Jonatha and Harold Wright can be reached at 937-767-9823.