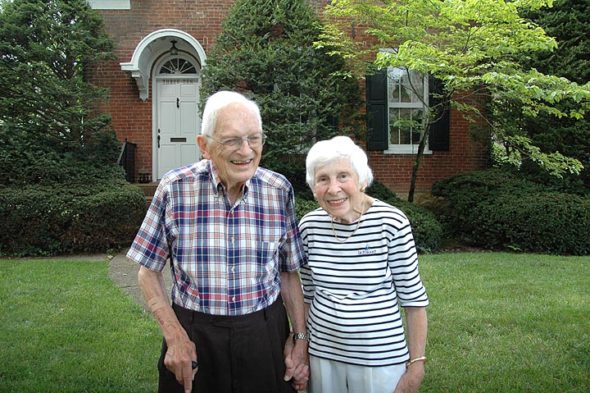 Carl Johnson was Yellow Springs’ local pharmacist for nearly 30 years. His wife, Sue, helped him run the pharmacy, Erbaugh and Johnson’s, where Town Drug now operates. The Johnsons raised two sons in Yellow Springs, and have lived in the same handsome brick home on Dayton Street since 1967. (Photo by Audrey Hackett)

Fifty years in the same house

Fifty years ago this summer, Carl and Sue Johnson moved into a handsome brick home on Dayton Street with their school-aged sons, John and Jim. With a maple out front, a brick walk and four brick steps up to the front door — white, with a black knocker — that home is still the Johnson residence, striking for its neat and cheerful appearance. Carl, who turns 89 on July 31, and Sue, 87, say they enjoy living there as much as ever.

“Fifty years in the same house,” Sue said in a recent interview. “And it hasn’t changed much.”

The house is one of the oldest on the street, built in 1853, according to Sue. In 1967, when they moved in, the Village offices, including the police station, were located in the old Union Schoolhouse next door. It was the perfect perch for people watching, Sue said.

The Johnsons had another perch for watching — and serving — villagers in their daily life. For almost 30 years, from 1967 until 1996, Carl Johnson was the town pharmacist, first in partnership with his brother, Bud Johnson, then in solo practice, ably helped by Sue. Located where Town Drug is now, Erbaugh and Johnson’s was a village fixture for decades; the original owner was the locally famous Doc Erbaugh, and both Bud and Carl Johnson kept the Erbaugh name on the business.

Carl loved working in downtown Yellow Springs. “It was always a joy to open up the store,” he said. Though he opened early, some people picked up their newspapers even earlier, leaving their money outside the shop.

The pharmacy counter was upfront in those days, located in the window facing Xenia Avenue. “I saw the world go by. I’d gaze out the window and see people. I knew everyone in town,” he said. In later years, Sue joined him at the store, working the cash register, which was also located up front.

“They were always side by side,” their son Jim Johnson, who moved back to Yellow Springs several years ago, recalled. “That’s the way they spent their days.”

Carl Johnson was born in 1928 in Miamisburg, the son of a Frigidaire factory worker. His family lived in town, and for a while, on a farm outside of town. After high school, he enrolled in pre-seminary studies at Baldwin Wallace University, intending to become a minister. But just one quarter shy of graduating, he got drafted into the Army. Stationed on the 38th parallel, at the front lines of the Korean War, Carl served for eight months as an artillery medic. He was always on call, he remembered.

“I took care of all the guys,” he said. “It was very rewarding and I loved it.”

While he was in Korea, Carl and his best friend, Bucky, corresponded. Bucky often wrote about his girlfriend, and from his letters, Carl learned a lot about her. When Bucky told Carl they’d broken up, Carl, back home from service, decided he’d ask her for a date. The young woman accepted. Her name was Sue.

That first date was awkward, but ultimately successful, the couple recalled. They went to the movies and out to eat at Howard Johnson’s in Dayton. Carl was nervous, and put cream rather than salt on his sandwich, bluffing that he liked it that way.

“I was sure it was the only date I’d have with this lady,” he said, with a laugh.

Sue Johnson was born in Hamilton, Ohio, in 1929, one of the first babies delivered in the town’s hospital, then brand-new. Decades later, Sue made a point to have both of her children there.

She grew up in nearby Shandon, “a little crossroads” northwest of Cincinnati. Her father was a salesman and rarely at home; her mother ran the Shandon post office for 30 years. When Sue turned 13, she took over for her mother on Saturdays.

“I got to know everybody that way,” Sue said.

After high school, she went to Miami University, where she studied home economics. When she and Carl met, she was teaching home ec at Miamisburg High School, Carl’s alma mater. And during one summer, she worked at Mound Laboratories, the atomic energy plant in Miamisburg. Her job was to write checks.

The couple married in 1953, in Sue’s hometown. Carl by this time had decided not to pursue the ministry. His experience in Korea had opened a new path, medicine. “I found something else I’d rather be,” he said. He opted against becoming a doctor, as he hoped to start a family sooner than medical training would allow. His older brother was a pharmacist, and Carl resolved to study pharmacy, too.

After graduating from Ohio Northern University’s pharmacy program, Carl got his first job in Middletown, Ohio. Then for five years, he and Sue ran a drugstore in Fairborn. Carl dispensed drugs, while Sue prepared, from her home kitchen, some of the food items sold at the store.

Then, for just a year, Carl worked with his brother in Yellow Springs at Erbaugh and Johnson’s, filling in while Doc Erbaugh was away from the business. When the year was up, the couple and their two young sons moved to Oxford, Ohio. Carl worked for a pharmacy there for about five years, but was displeased with the owner’s approach to customers.

One day the owner “read me out in the back room for being nice to a customer,” Carl recalled. “I liked to talk to customers, and he thought I was wasting time.”

The experience was a turning point. “I called my brother and said, ‘I’m ready to come work with you.’”

And so he did. The family lived in a little house on Polecat Road for a year, then purchased the Dayton Street home. In partnership with his brother, who also enjoyed giving customers personal attention, Carl found the working environment suited him well.

Growing up in the village, Jim Johnson often heard classmates and their families speak highly of his parents, which made him proud. Many people relied on his father’s help and advice, and everybody loved Carl’s trademark laugh, according to Jim.

“It was big and real,” Jim said. “When he was delighted about something, you could hear it down the block.”

Carl and Sue worked hard in the store, running it themselves after Bud Johnson retired in 1984. They often returned to the pharmacy for a couple of hours after dinner to catch up on paperwork, Sue recalled. She handled the business side, while Carl focused on writing scripts and helping customers, according to Jim.

Beyond the pharmacy, Carl served on the Yellow Springs recreation committee, and belonged to the local Lions Club for 20 years. Sue was active in the local PTA.

But it wasn’t all work, no play. From the start, the Johnson brothers paused every morning for a cup of coffee at local diner Dick and Tom’s, located next door where Sunrise Café is now.

Carl carried on the tradition after Bud’s retirement, and the coffee club continues to this day, meeting at Young’s. Carl is the only original member left in the all-male group that includes longtime villagers Ed Vernot and Tim and Jim Shattuck. Local physician Alex Roche was also a member, until his death this spring.

Years ago, Sue was an avid bridge player, playing in two local bridge groups. She loves the game, she said, though her skills have gotten rusty in recent years.

The couple retired in 1996. Unable to find an independent buyer, they sold the pharmacy to Revco/CVS, but it stood vacant for a year until Fred Messina, of Jamestown’s Town Drug, opened a new business in the spot, which continues today.

Sue and Carl began their retirement with a trip to Australia and New Zealand, and later expanded their worldwide travel, visiting China, Kenya, Russia, Italy and many more places. From the earliest days of their marriage, they always took the time to go away together, even if only for a few days, Carl explained.

“All our married life, we never missed a vacation,” he said.

Their joy in being together defines the couple’s relationship, according to Jim. “In 60-plus years of marriage they’ve spent no more than 60 or 70 nights apart,” he said.

Asked about the secret of their long marriage, Carl said, “There’s a lot of hard give and take.” But something else, too. “It takes a lot of love,” he added.

Though Carl has faced some health issues, now relying on a cane or walker to get around, the couple hopes to stay in their home as long as possible. Jim, who lives around the corner on North High Street, moved back to town several years ago, from Washington state, to help them do just that. Their other son, John, a dentist, lives not too far away, in a suburb of Columbus.

Others in the village help out, too. “When they need help, Yellow Springs seems to have it. That’s one of the nice things about the village,” Jim said.

Handyman Scot Speakman has done little jobs for the Johnsons for at least a decade. It’s been a pleasure, he said this week.

“They light up the room when you speak to them. They have that old Yellow Springs way of cooperation and friendliness.” He paused, choosing his words carefully.

“People like them have made Yellow Springs what it is,” he said.