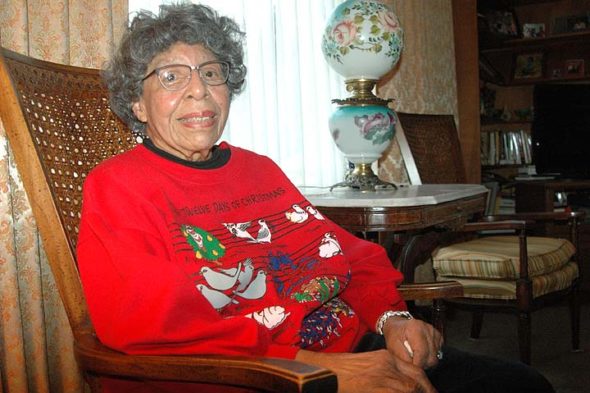 Phyllis Lawson Jackson is the fifth generation of the Lawson family to live in Yellow Springs. Jackson, known as a local historian, is shown beside her grandmother’s lamp and table in her Stafford Street home. (Photo by Diane Chiddister)

You’d be hard pressed to find someone with deeper Yellow Springs roots than Phylllis Lawson Jackson, the fifth generation of the Lawson family to live in the village. And while she was born into that depth of connection, she has lived her 92 years in a way that deepens those roots even further. Jackson has lived in only three houses in her life, all within a few blocks of each other, beginning with the High Street home where she was born, then the Lincoln Court house she shared with her husband, and finally the Stafford Street house where she raised her family, and lives still.

“I never did move far away from my home,” she said with a smile in a recent interview.

Perhaps not surprisingly given her local connection, Jackson is known as the town’s unofficial historian, especially of its black families. While she no longer spends long days chasing down facts in the Greene County Library, she was once so absorbed in her library research that she never noticed how hard the chairs were, although she did notice this on a recent visit.

“From my perspective, she’s the go-to person related to African-American history in Yellow Springs,” said Antioch College history professor Kevin McGruder, who is working with Jackson on several projects. “She’s a wealth of information.”

Jackson has slowed down some in recent years, although her mind is still sharp. Because she doesn’t enjoy working on a computer, she doesn’t do as much research as she once did, when she frequented the Greene County library. But Jackson has a few more stories to tell and she hopes to tell them, in the projects she’s working on with McGruder.

Specifically, she hopes to write about two memorable men from her childhood in Depression-era Yellow Springs. One was Jefferson Williams, an ex-slave from Virginia, who lived on Corry Street near the post office, then located in what is now Williams Eatery. While the post office said it didn’t employ blacks at the time, Williams clearly worked there in his job hauling mail in a cart from the trains running through town to the post office.

The second focus of Jackson’s attention will be JT Hornady, the town’s justice of the peace in the 1930s. He was known for wearing a bearskin coat in winter, and for sleeping in his office when he and his wife weren’t getting along. As a young girl growing up, Jackson was impressed that one of the town’s top officials was African American.

“He was interesting to me because he’d run for justice of the peace and been elected,” Jackson said.

Jackson’s interest in history was sparked by the stories of local African Americans who overcame obstacles — and there were always obstacles  — to achieve success.

“They had lives and stories that might make an impact on people today,” she said.

What especially interested Jackson in local history was the richness of African-American lives in Yellow Springs. The village was unusual in its relatively large percentage of blacks, with many having come to town after emancipation and at the urging of their former owners, Jackson believes. What drew former slaves to Yellow Springs was likely the opportunities of Antioch College and Wilberforce College, which was originally intended as a school for the black children of slave-owners, according to Jackson. Many former slaves were eager to become educated, and the local liberal-minded colleges were open to them, Jackson said, although while Antioch allowed blacks to take classes, they weren’t allowed to live on campus.

Especially unusual in the early and mid-1900s was the extent of community leadership entrusted to blacks in Yellow Springs. For instance, Jackson’s great-great grandfather James was the village constable before she was born, and her brother, James, was mayor of the village in the 1960s. Blacks also led the police department, the fire department and the school board in those years.

“You’d think this was a black town,” Jackson said, regarding the extent of black leadership.

“I think Yellow Springs has changed drastically in the last 30 years,” she said.

While the numbers of blacks have declined, Jackson also sees less interaction between those of different races.

“I don’t think we have people doing things together the way we once did,” she said.

Jackson herself was known in the village for crossing racial divides, according to John Gudgel, who grew up in the village and has worked here all his life.

“She’s able to navigate across cultural and racial lines in Yellow Springs,” he said. “People always respected her ability to get along with people. She sees no racial barriers and I admire that.”

Jackson’s ability to get along with others began in her childhood, which was a world far more trusting and innocent than that of today. When her brothers didn’t come home for a couple of days, Jackson remembers, her parents wouldn’t worry — the boys were likely camping in the Glen. The Glen was also the favorite spot for Jackson and her grade-school friends to roam on Sundays, a popular spot for all local children.

“Walking was our biggest recreation,” she said.

Churches also sponsored many of the town’s social events, such as the “moonlight picnics” which began in the afternoon on the lawn of the Central Chapel AME church and went on into the night, with the church’s best cooks selling their wares. Also popular were church-sponsored “lawn fetes” such as that sponsored by the Catholic Church on the Mills Lawn grounds and open to the whole community.

And by the time she was 6, Jackson was riding the streetcar to Springfield alone, then changing to a bus to go visit her grandparents.

But Yellow Springs was also a part of the larger world, and racial discrimination was real in the village. While the public school on Dayton Street was integrated, the outhouses out back were not, at least not for the girls. And while both blacks and whites took part in events open to the public, anything private — such as birthday parties of her school classmates — were strictly segregated. Black girls weren’t allowed in the white Girl Scout group, so they formed their own group.

But Jackson doesn’t remember tension between the races. Rather, the separate worlds were just how things were at the time.

“We got along well,” she said of blacks and whites in the village.

Along with racial segregation, it was a time with limited opportunities for women. When Jackson was in high school, her writing caught the eye of her English teacher, who took her to meet a history professor at Antioch College. While the professor encouraged her to attend college, Jackson knew that this was not a realistic option in her family. Her father spent much of his life working as a janitor at Antioch College, then delivering ice, and her mother worked at Antioch as a housekeeper.

“We didn’t have enough money to even think about it,” she said.

So after graduating from John Bryan High School, Jackson went to work at Wright Patterson Air Force Base as a clerk typist. But while she couldn’t attend college, work held its own compensations. For instance, a co-worker who came from Mansfield, Ohio, had a brother named Ted Jackson, a quiet man who loved singing and dancing. When Phyllis visited her friend’s home in Mansfield, she and Ted met.

“We just hit it off,” Jackson said.

And they continued to hit it off for more than 60 years, as both Ted and Phyllis worked at the base and the couple raised their two children. Kevin now lives in Dayton, and Kimberly lives in Oak Park, Ill. The family was busy, with work and school and a close relationship with their church, the Central Chapel A.M.E.

Through the years Jackson’s interest in researching local history grew, and she began her daylong visits to the Greene County library.

“I get excited when I discover new things,” she said.

She also clipped articles out of newspapers, and still has a five-drawer file cabinet stuffed with items that caught her eye. She laughs as she says that when she’s no longer around to guard the file cabinet, her kids will toss it away.

“I tell people that when I die, if they want something from that file, they’d better come get it,” she said.

Since Ted died in 2013, Phyllis has lived alone. While her circle of friends has diminished from deaths, she maintains her good spirits. For instance, she finds some pleasures in living alone.

“I have my own remote and don’t have to share,” she said. “I can still drive and go wherever I want.”

Asked about what in her life she’s most proud, Jackson listed her children and grandchildren, and having had a long and successful marriage. And to what does she owe the success of her marriage?

“We both learned to shut up and listen, to try to work through things together,” she said.

Overall Jackson is in good health, and she’s grateful for that. Yes, there are losses involved in aging, but Jackson keeps a positive attitude. Don’t sweat it, she said about aging — yes, things have changed, but do the best you can do.

“There are things I can’t do but I make adjustments,” she said. “I’m happy.”

While Yellow Springs has changed considerably since her childhood, Jackson can’t imagine living anywhere else.

“I’m grateful for growing up in Yellow Springs,” she said. “I had freedoms that many kids don’t have. Yellow Springs was a safe place for myself and for my children.”