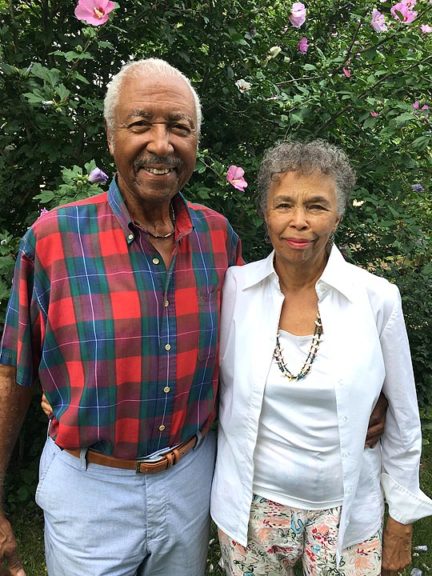 Jim and Betty Felder came to Yellow Springs when Jim was a young Air Force officer at Wright-Patterson Air Force Base and Betty a teacher in the Mad River Township schools. They raised their two sons, Greg and Kevin, in the Omar Circle home where they still live. (Photo by Holly Hudson)

Always coming home to the village

Betty and Jim Felder, both in their 80s, sit on the sofa in their Omar Circle home and finish each other’s sentences with the fluidity that comes from years of practice. They have been recounting their time in Yellow Springs, how they met and when they came here, by each telling their stories which circle back, intertwine and pick up where the other left off.

Betty tells about how and where she and Jim met: on her front door step. She was born in Toledo, but came to Dayton when her father got a job as director of the Linden Community Center and she ended up going to the University of Dayton. During college, she would often come to Yellow Springs to attend Shakespeare performances on the lawn at Antioch and have a burger at Com’s. Even then she always thought, “If I am going to have to live in Ohio, I want to live in Yellow Springs.”

When they met, she was attending UD and Jim was a 2nd lieutenant in the Air Force. The military housing complex Page Manor had just been built for the new influx of personnel at the time, and Betty’s father had been tasked with helping the young lieutenants find housing. A friend of Jim’s was staying with Betty and her family. Jim came to visit him and Betty opened the door with her hair in rollers and him in peg pants. Betty laughed, “Let’s just say, we were not impressed!”

Not long after their less-than-stellar first meeting, a dance came up and the houseguest, Bob, was going with Betty’s friend. She didn’t have a date and her mother suggested she ask Jim to go with her. He said yes and this time when he came to the door, he looked quite different: all spiffed up and ready for the dance. According to Betty, “the rest was history,” and they were married two years later in 1955.

Jim recalls growing up in Orangeburg, S.C., and says he was very lucky because were it not for the two black colleges in his town, he might not have ever made it to college. Born the 11th of 13 children, only six of whom made it to maturity, he graduated from high school at 16, at the end of the 11th grade, which was when the school finished at that point. It was right after his departure that they installed a 12th-grade requirement. Jim believes he was lucky to get out of school at 16, go directly on to college and graduate when he was 20 years old. One of his friends in high school went on to become the first black Justice of the Supreme Court of South Carolina.

When he graduated from Claflin College in Orangeburg in 1951, the Korean War was at its height and like many young men his age, he enrolled in the Air Force. Having graduated with a B.S. in biology and a minor in chemistry, he was put to work as a bypass specialist and sent to a laboratory in a hospital after basic training. He was shipped to Sampson Air Force Base in upstate New York where he met other college graduates. Together they planned a road trip to San Antonio, Texas, where they would receive laboratory officer training, affording them opportunities other than front-line combat.

Soon enough, his orders came through and he was sent to Wright-Patterson Air Force Base to work as a laboratory officer. He also worked a second job as a “lab tech” at St. Elizabeth Hospital in Dayton. His goal was to go to medical school and once he was settled at Wright-Patt, he applied to OSU. When they found out he was from South Carolina, he was advised to get out of the Air Force, work for a year in Ohio and establish residency, and then reapply.

Meanwhile, Betty was hired to teach in the Mad River Township schools, which were overcrowded at the time and desperately in need of teachers. A friend of hers also worked there and told her about the job. Her friend was black, but very light skinned and could pass for white, which is why they suspected she got the job without a problem. When Betty applied, she had to go before the school board for approval even though that was not customary and her friend had not been put through the same paces. Nevertheless, she was hired and spent many years working there. Betty recalls how they would see each other at staff meetings and only say a brief hello, even though they were the best of friends. They both just wanted to keep a low profile.

Eventually, Betty and Jim were transferred to the base in Rome, N.Y., for about a year and when they returned, Jim left the service and worked at Wright-Patt for a year doing research before reapplying to medical school at OSU. He still did not get in. Frustrated at that point, and recognizing his chances of getting into the program were slim when there was only one black student admitted that year in a class of 100, he decided instead to go to graduate school, studying microbiology at OSU. When he finished grad school, Jim took a job at St. Elizabeth Hospital again and worked a second night job at the Post Office in downtown Dayton, so that the couple could afford to send money home to his mother in South Carolina.

With time and perseverance, he landed an even better job at Middletown Hospital near Cincinnati. He was called in for an interview after sending in a letter and résumé and once there, the administrator said, “Jim, you’re the microbiologist we need! You go up and see the president and if he doesn’t give you everything you ask for you come back and see me.”

Jim did indeed go see the president and spent the next 31 years working at Middletown. He drove 41 miles each way to work and never missed a day. He was eventually able to complete his master’s  in microbiology by transferring credits from OSU to Wright State.

When not working, Jim busied himself with helping Joe Robinson coach the first village soccer team for kids, and appeared in many plays at Center Stage such as “Guys and Dolls,” “Pirates of Penzance” and “My Fair Lady,” to name a few. According to Jim, his long commute was a boon to his amateur acting career: he put his lines or lyrics he had to learn on tape and would play them back to himself as he drove to and from work. He also sang with the Middletown Hospital Follies, which was a production put on by the hospital once a year, complete with costumes shipped in from New York. Jerri Hart, a radio host in Cincinnati, heard him sing in one of the Follies and invited him to come and be the “live crooner” on her show on WPFB every week.

By this time, Betty and Jim had bought a plot from Omar Robinson on Omar Circle and begun building what was to be their family home in Yellow Springs. They moved in on Jan. 20, 1962, with their eldest son, Greg, already born. Kevin followed along in 1962. They have fond memories of raising their kids on Omar Circle as it was like one big family on the cul de sac. Betty said she never had to worry about “keeping up with the Joneses” because if one of her kids said they wanted something another kid had or was doing, Betty would just call up that parent and together they would put the kibosh on any such pining. It was also a great neighborhood for working parents because there was always somebody home at someone’s house where a kid could go after school if their parents weren’t home or working.

When Betty tired of commuting to Dayton for work she took a position at what was then Goes Playschool, which worked well for her because she could take Kevin with her to work. From there she got hired by the Yellow Springs Schools and spent 18 years working at Mills Lawn as a first- and second-grade teacher, then ultimately as assistant principal for two years. When she was finally forced to retire due to budget cutbacks, she learned how to do infant massage and volunteered at St. Elizabeth’s Hospital teaching new mothers how to massage their infant babies.

Betty and Jim were involved in the growing civil rights movement of the 1960s and spent many Saturday afternoons picketing Gegner’s barbershop along with many other villagers and Antioch students. Most of the time, it was peaceful, but Jim remembers one incident that became violent. A group of Antioch students were blocking U.S. 68 and Jim and some other community members, along with Maurice Pemberton, Michael Lewis from Antioch, and Jim Lawson, the mayor at the time, were asked to act as monitors of the situation. Police were brought in from out of town and started harassing the students with batons, bloodying a few.

All in all, the Felders say they have always felt welcome in Yellow Springs, far more so than they had ever experienced in Kettering or Beavercreek years ago, as it was made clear to them there were not many opportunities to buy land and build a house. Betty said, “You’re always dealing with something and it can be very subtle at times,” but that mostly, she does not like to dwell on it and feels that Yellow Springs has been an amazing community  to raise their family in, especially for the number of residents the town has. They have been members of the Presbyterian Church since 1962 and were only the fourth black family to join. They have both been chairman and co-chairman of the Strawberry Festival for more years than they can remember. Jim is also a retired major in the U.S. Air Force.

Their sons, Greg and Kevin, live close by in Xenia and have given them four grandchildren and five great-grandchildren.  Some of their fondest memories of raising their kids in Yellow Springs was taking their 22-foot camper out regularly on weekends after soccer practices to various state parks. They also traveled all over the country in that trailer, as far north as Montreal and as far south as Tijuana, but always coming home to Yellow Springs.