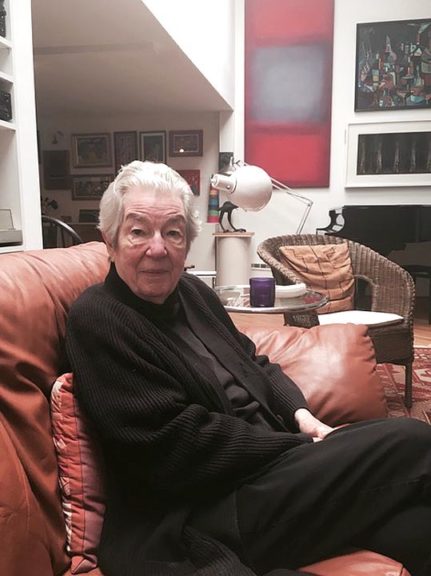 Born in the Netherlands, Jane Baker has lived in Yellow Springs since the 1960s. She has worked as a freelance editor and book designer for many years, including doing copyediting and layout for the Antioch Review since 1975. (Photo by Holly Hudson)

Jane Baker: a life of books

Jane Baker was born in The Hague, Netherlands, in 1934 to an English mother and Dutch father. As Baker tells it, her parents meeting was quite romantic: her mother, from Wembley, in northwest London, met her father on a transatlantic voyage in the early 1930s. Her mother was already in the U.S. and working for one of the Chicago newspapers at the time, and she met her father crossing back over to London. Baker and her sister were born soon after in the Hague, and Baker spent the first five years of her life there. In 1939, the family moved to Elizabeth, N.J., where Baker grew up bilingual, speaking Dutch at home and English at school. From there, she attended Wellesley College, where she majored in English. Lamenting the fact that she didn’t graduate, she said, “I got married after two years to a guy from Nebraska who had been at MIT and we wound up in Dayton.”

Baker and her first husband had two children before she decided to divorce him, leave the enivorns of Centerville, where she never felt at home, and move to Yellow Springs.

“We used to come to Yellow Springs for Shakespeare plays, and I thought this would be an interesting place to live. Best decision I ever made. In Centerville, if you walked around the neighborhood, people looked at you suspiciously. Here, everyone was so friendly,” she said.  Her daughter, Sidney, was 10 when they arrived in the village and promptly acquired two after-school jobs, as it was an era before a minimum work age was installed. One of her jobs was as a housecleaner, which Baker thought was ironic because her room was always a mess, and the second, as an aide shelving books at the library. Her son, David, two years older, was born with severe learning disabilities and lived in a group home/school.

As a newly single mother in 1969, Baker quickly acquired a job in the publications officer at Wright State, where she was given the grand title of university editor. It was there she met her second husband, Bill Baker, who was the dean of Liberal Arts at the time. However, her boss encouraged her to pursue a degree since it was free to employees. She received her master’s in history at WSU after examining the local history of her adopted community of Yellow Springs and writing a book about William Mills that was published by the local historical society.

After a few years of working in the publications office, she quit to work as a freelance editor and book designer, a job she loves and has been doing ever since. One of her primary gigs is doing the copy editing and layout for the Antioch Review, which she has been doing consistently since 1975. At four issues per year, this brings her to nearly 168 issues completed for the Review. Baker said she doesn’t see any reason to retire because she enjoys her work. “When the changing technology becomes too much, then I’ll probably quit.” In the meantime, she keeps busy at her computer most of the day, editing in Word and using InDesign on her Mac for the page layout work on the Review. She goes back and forth quite a bit on each issue with the designer, David Battle, another veteran of the company.

When Jane and Bill Baker married in 1972, he already had three children of his own. They have always been and remain a part of her life since he died in 2002. The house they created together is a beautiful testament to their eclectic design tastes and travels around the world. It was built in 1854, and they purchased it in 1972 and began renovating it, turning what was once a garage into a large, open-plan living area with skylights and a loft bedroom on the second floor. The house has a further three bedrooms.

“We had a lot of fun working on this house. At first, we naively thought we’d pay someone else to do it, but we quickly ran out of money so we decided to continue to work on it ourselves,” she said.

A beautiful baby grand piano occupies one corner of the room. When asked if she plays, Baker said, “I did play the piano but then got seduced by the cello.” She describes how she was working with Pat Olds on developing the Early Music Society in Yellow Springs and Pat kept encouraging her to take up an instrument like the harpsichord.

“But I told her if I was ever stupid enough to take up another instrument, it would be the cello.” And so she did and took to it quickly, practicing up to four hours a day and giving her first recital after only three months of playing. She laughs, “I never forgave Pat for introducing my piece out loud at the recital as ‘Fido and His Master.’”

While Baker still believes the village is a wonderful community and place to live, like many, she laments the cost of living in town and the growing lack of diversity; however, she feels it is still rich culturally in Yellow Springs. She also feels it is a great loss to the town that the Antioch Writers Workshop was forced to move to Dayton due the loss of Antioch University Midwest as their venue. Her late husband, Bill Baker, was one of the founders of the workshop, along with poet Judson Jerome.

A typical day for Baker starts with a three-mile walk, followed by most of her day working at the computer. She tends to work on mostly non-fiction books for her clients. Later on, she will read, either fiction or a Stuart Woods mystery or perhaps re-reading something from her substantial Virginia Woolf collection. She is re-reading Woolf’s biography by Quentin Bell. She admits she does not cook as much as she used to — she was an avid chef and member of the local Giddy Gourmet group that shared creating meals from around the world for many years. Baker still hopes to get back to the Netherlands again for a visit with family. On her Dutch, she shrugged and admitted she doesn’t speak it very well anymore. “You use it or lose it!” she said and smiled.