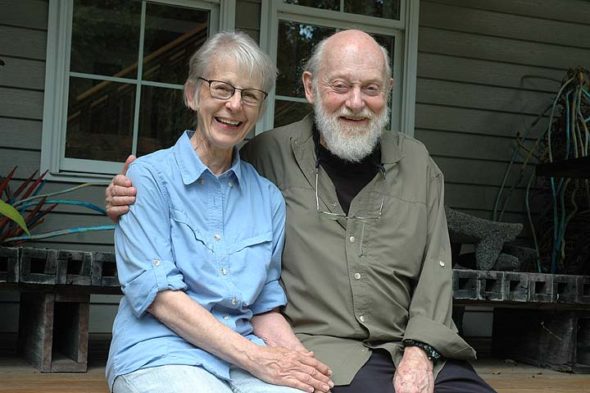 Poet, poetry translator and retired Antioch College professor of Japanese language and literature, Harold Wright has lived in Yellow Springs since 1973. He’s made many dozens of trips to Japan over the years. Here, he’s pictured with his wife, Jonatha, on the porch of their North Winter Street home. (Photo by Audrey Hackett)

Harold Wright— A bridger of words, and worlds

It’s been a dozen years since Harold Wright’s last trip to Japan, the longest time he’s been away from the country he fell in love with as a young man. But this fall, he and his wife, Jonatha, will be flying to Tokyo as the honored guests of Emperor Meiji — or at least his earthly representative, the high priest of a Shinto temple built almost 100 years ago to house the deceased emperor’s spirit.

“They told me if I was too old [to make the trip], they would send the priest over to talk to me,” Wright, who turned 86 in June, said with a chuckle. The News spoke with him recently from his Yellow Springs home.

A poet, renowned translator and retired Antioch College professor of Japanese language and literature, Wright is a native of Dayton and has lived in Yellow Springs since 1973. His story begins in Ohio, but reaches across the globe to Japan. His life’s work has been translation of Japanese poetry, and Wright himself is adept at bridging disparate worlds.

Wright was born in inner-city Dayton, but grew up in the then-rural suburb of Northridge. His parents had moved up from Appalachian Ohio; his father was a third-generation coal miner who took a job in a furniture factory and learned the carpentry trade. His childhood home, built by his father, was a magnet for relatives from Appalachia, Wright recalled.

“Somebody was always sleeping on the back porch or the floor,” he said. Uncles and cousins who worked the night shift filled the family beds during the day, a practice known as “hot beds.”

The house had no indoor plumbing, and “you could go rabbit hunting out the back door,” Wright said, rounding out the picture of his rural upbringing.

In school, Wright was a “terrible student,” though he scored high on a school-administered IQ test. He was dyslexic before the condition was understood or diagnosed. Yet he loved language, memorizing many of the old ballads he heard from Appalachian kin. Some ran to hundreds of verses. He would sing them to himself on his bicycle, or to the squirrels in walks through the woods.

“I couldn’t carry a tune in a bucket, but I didn’t care,” Wright said.

And he was drawn to poetry. It was short, and he could decipher short lines more readily than pages of prose. Plus, the language and rhythms of poems appealed to him.

He graduated from high school in 1949, then spent one year as a pre-engineering major at Bowling Green State University. He dropped out just as the Korean War was heating up, and to avoid being drafted into the Army, joined the Navy, hoping it would be a route to travel and adventure. It was.

“Hemingway and all those people went off to war, and came back with books to write,” he said.

He was sent to Japan for three years as a Seabee, a member of the U.S. Navy’s construction force. From his first moment on Japanese soil, in 1952, he had the uncanny feeling he’d been there before.

“It was a déjà vu experience,” he said.

Within nine months, he’d learned enough Japanese to travel the country by himself. One day, hiking in the mountains, a thought occurred to him: “I wonder what kind of poetry the Japanese write?” He inquired at a bookstore back in town, and was handed a dusty volume containing some of the oldest poems in Japan, from the eighth century.

“I still have it,” Wright said.

In a sense, that book set the course of the rest of his life. The poems were written in the tanka form, which, distinct from the newer haiku form, mingles images of the natural world with human feeling. Wright took to tanka immediately.

“My tanka teachers said, ‘You can write about love,’” Wright recalled.

He did, composing tanka in English in praise of a young Japanese woman who had caught his eye. Over 60 years later, sitting in his Yellow Springs living room, Wright paused and recited one of the poems, about a breeze sweetened by virtue of having passed through the young woman’s hair. Time seemed to stop, then start again.

Wright was smitten, and not just by poetry or Japanese sweethearts. He decided he wanted to live in Japan forever. And so, after discharge, he found his way back to Japan and married his first wife, a Japanese woman. They had one child, Rose, who now lives in Yellow Springs.

Lacking a student visa to study in Japan, Wright enrolled at the University of Hawaii, staying five years. Continuing his studies in Japanese language and literature, he spent two years at Columbia University on a Ford Foundation grant, and another three years in Tokyo on a Fulbright.

“Then the grants ran out and I had to go to work,” Wright said.

Ohio State University hired him “sight unseen” to design a Japanese major. He taught there for seven years, from 1965 to 1972, becoming deeply involved in student protests. Through those protests, he encountered his first Antioch students.

“Those kids were amazing organizers,” he recalled.

Tired of academic life, and tempted to either get back in touch with his Appalachian roots or return to Japan, he left Ohio State. He didn’t miss teaching, though a small voice inside said, “If a place like Antioch ever wanted me, sure, I’d reconsider.”

A place like Antioch did want him. Wright got a call from Frank Wong, then-chair of the history department, inviting him to teach a cultural history course. The invitation came just before the Antioch strike in the spring of 1973. Despite the turmoil, Wright was game. And so were his students, voting to continue the class off campus at one student’s apartment.

Wright taught two more courses, including one in Japanese poetry. But the college couldn’t hire him on a more permanent basis, having laid off a quarter of its faculty because of the strike. So Wright found his own money, a grant from the Japan Foundation, which he used to start the college’s Japanese program. When the grant money ran out after three years, Antioch offered him half-time pay, plus an apartment. Wright didn’t hesitate.

“I loved the place. By that time, [teaching at Antioch] was the only thing I wanted to do,” he said.

What he valued most, he said, was the freedom. “I designed my own program. I had the freedom to do what I thought was best for the students,” he said.

“Harold embodied the Antioch spirit,” said Beth Bridgeman, a current instructor of cooperative education at the college and the founder of Ohayo Ohio, a local celebration of Japanese culture. “He loved his students, and he trusted them.”

Wright was a decisive influence in the life of Antiochian Everett Brown, a well-known photographer who has lived and worked in Japan for many years.

“Harold shared his deeply profound love and understanding of Japan and it is this spirit that was instilled in me as a student 35 years ago,” Brown wrote in a recent email.

As a student in Wright’s Japanese art history class, Brown asked if he could submit a selection of his ink drawings, inspired by Japanese techniques, in lieu of a term paper. Wright agreed.

“Thanks to that, my understanding of Japanese aesthetics went beyond the cerebral, and that has made me the artist I am today, I believe,” Brown wrote in the email.

Brown is one of dozens of Antioch students who went on to practice Japanese arts, and live and work in Japan, according to Bridgeman. Organizing Ohayo Ohio for the first time last year, she reached out to numerous alumni with ties to Japan.

“They all got their start with Harold,” she said.

In 1984, after Antioch turned down his request to take a group of students to Japan, Wright and his students found another way. The students secured co-op jobs in Japan, while he got a grant to translate more of Emperor Meiji’s poems. Students and teacher met regularly as a group. From that spunky start grew Antioch’s formal exchange program with Kyoto Seiko University, which lasted for 14 years.

An NEA grant followed in 1986, and then a happy turn in Wright’s personal life. He met his current wife, Jonatha, at Antioch Writer’s Workshop in 1990. The couple married in 1991, and immediately discovered a shared interest in storytelling, the product of their common “country” roots. Jonatha joined Harold in making yearly visits to Kyoto as part of the Antioch program, and took delight in using storytelling as a vehicle for language learning and cultural exchange.

“We told stories together. It was a wonderful way to learn,” she said.

Wright retired from Antioch in 2005, after more than 30 years at the college. Since 1997, he and Jonatha have lived in the house she designed at the end of a little leafy lane on North Winter Street. Wright’s daughter Rose lives in town. His second daughter, Rina, whose mother is villager Iko Wright, now resides in Utah. Near and far, there are friends, former students, grandchildren.

And always at hand, there are poems. Wright has published half a dozen books of Japanese poetry translations. He also publishes occasional poems as part of his tanka column in this newspaper. He writes his own English poems in Japanese forms, as well as family stories for his children and grandchildren. Last winter, he picked up a project he began in the 1960s and has worked on intermittently, a translation of 311 of Emperor Meiji’s poems. He was first asked to translate some of the poems in connection with the 1964 Summer Olympics in Tokyo, and has long planned a more comprehensive volume.

“I had this project on my conscience,” he explained.

Now there is renewed interest from the current high priest of Meiji’s shrine, prompting Wright’s upcoming visit to Tokyo.

In another instance of life coming full circle, Ohio State University recently contacted Wright about establishing an archive of his scholarly papers — in part to document his founding of the university’s Japanese studies department, which has become one of the leading programs in the field.

In an article published in 1999 about his translation of Emperor Meiji’s “clock” poem, Wright meditated on the many ways to experience and understand time. The article concludes, “If we can know that the stones of our earth and the orbiting moon will be here long after our lives, we might want to look more at the infinity of night sky.”

Wright, from his spot on the globe in Yellow Springs, often does.