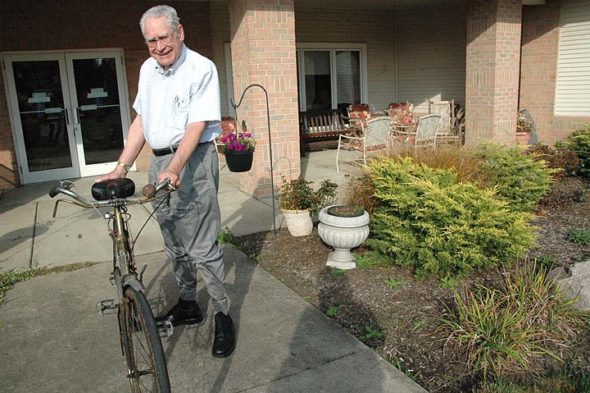 Carl Hyde, who moved into the Friends Assisted Living Center a year ago, first came to Yellow Springs as an Antioch College freshman more than 70 years ago. After more than four decades as a town physician, he’s known to many as “Dr. Hyde.” He rides his bike regularly in good weather. (Photo by Diane Chiddister)

Carl Hyde: A habit of caring, and aging well

When Carl Hyde was a 12-year-old boy growing up in New York City, he liked to ride subways by himself to the end of the line. He’d buy a token — it cost a nickel in 1940 — then stand at the front of the train, looking out the window to the city beyond.

“I wanted to see how far a nickel could go,” Hyde said recently. “I covered all of Manhattan and the Bronx.”

That curiosity and engagement with the world has served Hyde well. Now almost 89 and retired after a long career as a physician, he lives at Friends Care Assisted Living Center. Hyde occupies a single room with a bed, two desks, two computers, family photos and many hardcover books. While his living space is much smaller than it’s been in the past, Hyde’s life remains large in the ways that count, including his interests, his causes and his compassion for others.

Though he retired more than 15 years ago, the habit of caring for people remains, according to an Assisted Living staff member.

“He pushes residents in wheelchairs to the dining room and visits people in the nursing home, kind of like he’s still doing rounds,” said Linda Malone, a nurse’s aide at the center. “He even worries about staff members, wants to help if we’re sick. He’s awesome.”

As well as caring for individuals, Hyde has a passion for social justice. On one of his computers he types letters to Ohio’s death row inmates -— there are 60 to 70 in all, and he corresponds with about seven. He began his death-penalty activism in 1999 when the state, after a hiatus, reactivated capital punishment. Hyde was distressed, as the practice goes against everything he believes as a Quaker pacifist.

“I had a leading that I should be there, that I should go where the execution takes place and protest,” he said. “I simply believe that killing people is wrong.”

So Hyde rounded up a few like-minded people, and the small group stood outside the building at the Lucasville prison where the execution was held, holding signs saying that it’s wrong to kill people to show that killing people is wrong. And he’s gone back about 20 times since, for the intervening executions, and plans to be there in January 2017, when the next is scheduled.

While Hyde continues his social justice activities, his life also includes many small pleasures. When he’s not out and about, he enjoys watching goldfinches at the bird feeders outside his window, and listening to classical music. In good weather he rides his bike almost daily. He attends Springfield Symphony and Chamber Music Yellow Springs concerts along with Quaker meeting on Sundays, serving as a Quaker pastoral visitor to anyone at Friends Care who wants one. He visits with his daughter, Sarah, who lives in town, and his son and daughter-in-law, David and Susan. Because he still drives, he can go out to dinner with friends.

While he’s in generally good health, Hyde sometimes feels his age. His legs don’t work as well as they once did, and sometimes he forgets things, especially names.

Hardest of all is the absence of Lorena, his wife of 64 years, with whom he intended to move to Assisted Living. But Lorena died a year ago last spring, before they could make the move.

But he’s generally satisfied with his life in Assisted Living, and living in a single room doesn’t faze him.

It’s been more than 70 years since Hyde first came to Yellow Springs in 1944. He lived then in a single room too, as a freshman at Antioch College. Raised in New Jersey and New York City by socialist parents, he first heard about Antioch while a student at the Bronx High School of Science, and he was attracted to the college’s co-op program. But because he skipped a few grades growing up, Hyde was 16 when he entered college.

“I don’t recommend that anyone start college when they’re 16 years old,” he said.

Hyde especially felt young during his first co-op, living on his own and working in a hospital pharmacy in Chicago. However, Co-op Dean J.D. Dawson soon took Hyde under his wing and encouraged him to work on campus in the chemistry lab for his second co-op.

“That gave me time to grow up,” Hyde said.

In the late 1950s when he was a student, there were no African-American students at Antioch, so he joined the Race Relations Committee in an attempt to attract black students. Through the efforts of presidential assistant Jessie Treichler, the college brought to campus Edith Scott, the older sister of Coretta Scott, who would also attend Antioch and later marry Martin Luther King Jr. Hyde also honed his social justice activism when, in a later co-op, he was “fetch-and-carry boy” for civil rights icon Bayard Rustin in New York City.

After Antioch, Hyde attended medical school at Case Western in Cleveland, and it was there that he had a strong feeling that he should marry the young woman he’d dated a few times at Antioch, even though he didn’t know her well.

The feeling was what Quakers call a “leading,” and they sometimes say they’ve heard the voice of God. While Hyde doesn’t know for sure if God speaks to him, it seemed so at the time.

And she didn’t. Hyde sought out Lorena, who was traveling in California, proposed, and the two later married. They stayed together for 64 years.

After Cleveland, the couple, who by now had a child, moved to Detroit, where Hyde did his internship, and a second child was born. While there, they heard that there was a young doctor, Harry Berley, in Yellow Springs, who was looking for a partner.

“We looked at each other and said, ‘Where do we want to raise our children? Cleveland, Detroit or Yellow Springs?” Hyde said.

So in 1954 they moved back to Yellow Springs, where two more children were born.

Thus began a long career in the village. He and Berley had very different personalities, but it was “an ideal partnership,” Hyde said. First, though, he had to talk Berley into making appointments with his patients, rather than just taking whoever walked in the door, as was Berley’s custom.

Life in the village was very different 60 years ago, according to Hyde. For one thing, the divisiveness in town felt more acute. It was the era of Communist witch hunts, and in the village there was far more tension between those who supported the college and those who considered it a hotbed of radicals, Hyde said.

So he was pleasantly reminded of the difference in 2008, when the college shut down for a year and it seemed everyone in town wanted it to open again.

“I really felt the contrast” between the two eras, he said.

Hyde also remembered his robust practice doing pediatric medicine in the ’50s and ’60s, because there were so many more children growing up here back then. Gradually, he said, his practice focused more on geriatrics, as the local population aged.

While he and Berley comprised Community Physicians, and were later joined by Paul Van Ausdal and then David Hyde, Carl’s son, there were also about 11 or 12 physicians at the Wright State University clinic when Yellow Springs had a larger population in the ’60s and ’70s. But it became clear during the 1978 blizzard that only four doctors actually lived in the village. For several days no one could drive on the roads, so the emergency squad came to pick up the local doctors at their homes, then brought them to the clinic to see patients.

Hyde’s interest in social justice never wavered, and he made it a point to serve African-American villagers in the same way he served white families. A friend and fellow Quaker, Jane Brown, said that when she attended a program on local history, African Americans who grew up in Yellow Springs remembered Dr. Hyde as the doctor who, in the ’50s and ’60s, would always come to their homes when they were sick.

Hyde confirmed this report, although he’s not sure he was unusual in treating all patients equally.

“I was conscious of making no distinction between people,” he said.

In fact, Hyde made house calls throughout his career, and at the end made them most often to housebound seniors. He only stopped going to people’s homes when he retired in 2001.

Hyde was 74 when he decided it was time to stop working. The signal came when he knew exactly the medications he wanted to prescribe for patients, but couldn’t remember the drugs’ names.

“I decided then it was time to retire,” he said.

But caregiving continued. For several years before Lorena’s death in 2015, Hyde took care of his increasingly ill wife and caregiving for other family members continues. Many villagers still call him “Dr. Hyde,” and he often gets asked for medical advice.

“If it’s something obvious, I might give advice,” he said. “Otherwise I’ll say, you should see a doctor.”

And though it’s been 15 years since he left his practice, Hyde still misses his chosen profession.

“I miss the relationships with patients,” he said.

But while aging has brought huge losses, such as the loss of the love of his life, Hyde has fashioned a meaningful old age for himself. He’s most often in good spirits, he said.

To Jane Brown, Hyde is a “model of aging.”

“He stays active, and what was important to him when younger remains important,” she said. “He continues to be available to anyone who needs him, in all walks of life.”